Cocooning in HK with the grandest of views | Inquirer Lifestyle ❮ ❯ 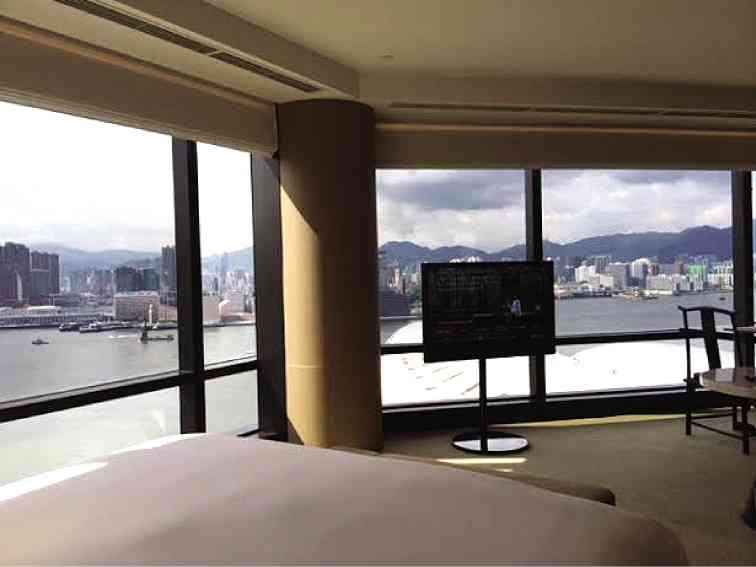 Cocooning in HK with the grandest of views

The Victoria Harbour at your feet, its placid waters dotted with ships and boats, seen through the panoramic glass window wrapped halfway around your room—that’s the view.

To me, Hong Kong can’t get better than that. It’s a simple, timeless sight to start one’s simple morning—in a place that’s never simple. HK brings the affluent best of any world, from business to food to shopping. The affluence is such that it’s as if you could pick money off the street (that’s no original insight).

But this view of Victoria Harbour, one of the most famous harbors in the world, brings simple joy. It’s not free, however.

That vista was from our room at Grand Hyatt in HK, on a trip last July. Until then, we associated Grand Hyatt with its grand (another word would be less apt), vast atrium lobby, a hotel opened 15 years ago by then general manager Peter Jentes, the veteran hotelier who would live and retire in the Philippines, and who would be as Pinoy as they come.

(Jentes was also the GM of Hyatt in Manila. Some Grand Hyatt employees still remember him, by the way.)

We also remembered Grand Hyatt as a hotel which carried great meaning for pioneering fashion designer Jeannie Goulbourn and her beloved daughter, the late Natasha.

But last July, we left behind those associations in our mind, and just enjoyed this luxury hotel as an experience that began with that panoramic view of the harbor. Imagine starting and ending your day with the 260-degree vista of this harbor that projects a different visual character with each moment—motion and activity in the daytime, dark and still at night.

We noticed how the HK skyline, seen from across the harbor, is no longer pockmarked with commercial neon signs. (These must have been astral-transported to Edsa.)

The room itself, one of the refurbished ones, carries amenities that will impress even the jaded traveler. Apart from the usual conveniences and comforts, such as a king-size bed and a wide sleek table perfect for desk multitasking as you face the harbor view, it has a spacious and luxurious bathroom.

The tub is behind a retractable divider which, when raised, gives you another unimpeded view of the bay and the sky. At your foot is a crystal TV monitor embedded on the mirror.

To any traveler, what’s paramount, apart from the bed, is the bath. What’s good about our Grand Hyatt room is that though the bathroom fixtures are minimalist-chic, they don’t test one’s IQ. We remember distinctly what the famous artist Juvenal Sansó once told us—that he could write a book on his woeful experiences with bathroom contraptions in hotels.

He was referring to convoluted designs of faucets, shower heads and such, which seemed to test the user’s intelligence, logic and common sense. (Unfortunately, the latter is not common in the design of bathroom fixtures.)

The one in HK is the first Grand Hyatt in Asia, opened 15 years ago. It has eight restaurants, all of them distinguished, as its general manager Philip Yu put it, by their distinctive yet “accessible, like comfort food” cuisine, perfect for its market, which is mostly the business traveler.

It’s interesting to note, Yu pointed out, that even if their main clientele is the businessman, families come for “staycation” at Grand Hyatt on weekends. Indeed, we saw families with tykes running around as early as breakfast.

Grand Hyatt is a stone’s throw away from the Hong Kong Convention and Exhibition Centre and the Wan Chai MTR Station and Star Ferry Pier.

Its heated outdoor pool is on an upper story, where you’re flanked by high-rises, their glass façades reflecting off the stray straws of sunlight.

Its spa is accessible through a garden of bamboos; you feel like you’re walking into a painting of a green paradise—in bustling Wan Chai.

Our massage was one of the best we’ve had in a long time. It was firm yet soothing, a good press-down on our points of stress but not hard enough to leave us bruised (believe it or not, years ago, we suffered back muscle ache, almost like a pinched nerve, from a very hard massage). And we liked it that our masseuse moved so quietly, allowing us to have a light sleep.

The hotel has a 24-hour fitness studio and a health club that has tennis and racquetball courts.

We dined at its Cantonese restaurant, One Harbour Road. Its interior design was inspired by a taipan house, from the balcony to its tableware—a mix of Chinese antiquity and initial trappings from the West, which the early era of the taipan started to accumulate.

Typical of Cantonese cuisine, the dishes were flavorful and filling, yet refreshing, owing to the fresh ingredients and healthy Cantonese cooking.

Another pleasant surprise was meeting our host, Carina Chorengel, Hyatt’s vice president for brands in Asia-Pacific. She is half-Filipino, the daughter of hotelier Marla Yotoko, a former Hyatt executive who’s well-known among Manila’s hoteliers and travel executives, and Bern Chorengel, the former CEO of Hyatt.

We would often hear Marla’s name mentioned by Lydia Castillo, Blanche Gallardo and the late Chiqui Recio—travel, media and hotel executives, respectively, who were the corporate amazons of their time. They were among Marla’s good friends.

Marla built a highly successful career abroad with Hyatt and raised her family there. Now retired, she shuttles between the Philippines and the US, maintaining homes in both countries.

Daughter Carina is herself carving a career abroad, mainly in HK and the rest of Asia-Pacific, yet has kept her ties to the Philippines, where she and her family vacation regularly. At Hyatt, her task is the branding, and the differentiation, of the hotel’s various products, from Hyatt to the top-of-the-line Grand Hyatt.

We were joined by her colleagues, director of Hyatt Gold Passport Vicky Yau and director of corporate communications-China Lillian Zhang.

Apart from the cuisine, Grand Hyatt’s top branding lies in the small details, particularly in the service of a highly trained staff.

According to general manager Yu, it’s interesting to note that, of the original Grand Hyatt staff of about 700, about 30 old-timers remain.

Yu is a young, Switzerland-trained hotelier, who’s been general manager for over a year now. Previous to Grand Hyatt, he was the manager of the HK Jockey Club for seven years.

The Federal Land group, headed by president Alfred Ty, will open Grand Hyatt in the Philippines in Bonifacio Global City (BGC) come June 2016. It will have top-of-the-line accommodations, specialty dining including a rooftop/restaurant bar, and spa facilities.

Grand Hyatt Hong Kong is relatively near Pacific Place and Times Square. We were right smack into sale season, the HK sale awaited by Filipino travelers, the markdowns as big as 70 percent.

We got one or two sale finds (Zara and Tod’s), but we must also admit this was one HK trip when we preferred to cocoon in our lovely hotel room.

And we’re looking forward to visiting Grand Hyatt BGC when it opens in 2016.