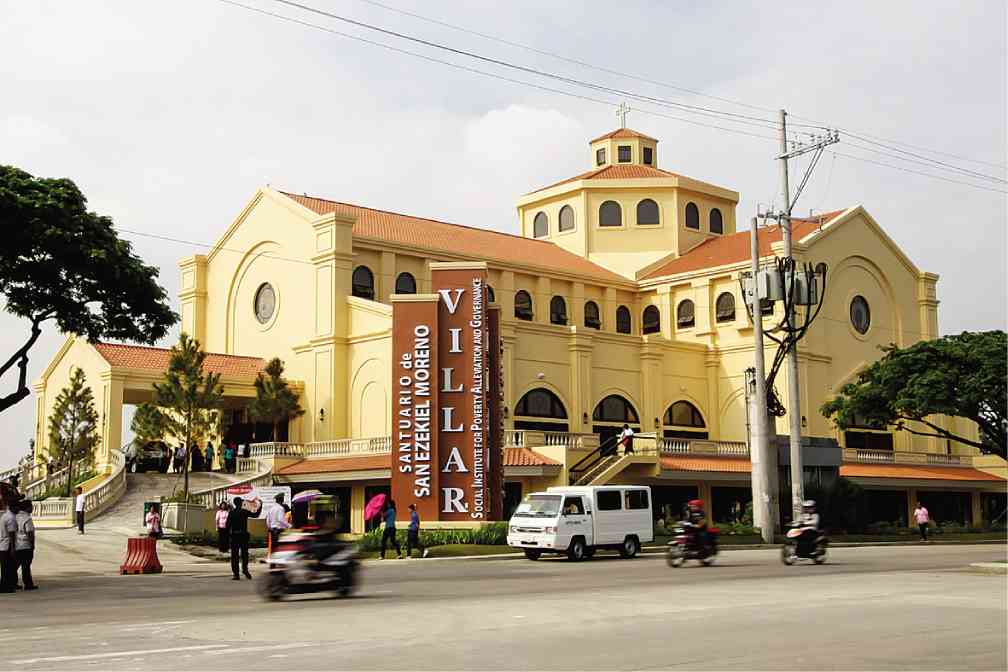 Manny and Cynthia Villar build a church for San Ezekiel

In former Sen. Manny Villar’s book, the Philippines has produced three saints: San Lorenzo Ruiz, San Pedro Calungsod and San Ezekiel Moreno. He and his wife Sen. Cynthia Villar honored the latter by building a Catholic church named after him.

“We’ve done more than 300,000 homes all over the Philippines, including housing to those who have left us behind,” said Manny Villar, referring to a memorial park adjacent to Villar Sipag. “But the feeling is different when you finished a church, especially if the results are good.”

The Villars previously built churches in Antipolo, Cagayan de Oro and Iloilo. But Santuario de San Ezekiel Moreno is the biggest and by far the most beautiful church they’ve built, the former senator added.

“This is a stylized form of Spanish Baroque architecture that was prevalent during colonial times,” said Andrews. “Although it follows the classic cruciform shape, it is definitely a modernized version.”

Andrews’ decision to do away with columns gives worshippers an unimpeded view of the altar from anywhere inside the 726-seater church.

“Modern structural engineering enabled us to do this,” he said. “As a result, the church looks bigger and more airy.”

A tabernacle and huge crucifix at the center are the altar’s focal points. The uppermost niche features an image of Our Lady of Buen Suceso. The church’s side altars are dedicated to San Lorenzo Ruiz and San Pedro Calungsod.

Made of marble, wood and carvings painted in faux gold leaf, the retablo is also inspired by those featured in South American churches that date back to colonial times.

In lieu of chandeliers, Amistoso went for low-maintenance pendant lights on both sides of the church. In the absence of columns, the lights have become design elements in themselves.

“The interiors are in harmony with the structure’s overall design—a cross between the Spanish mission style and Spanish Baroque,” said Amistoso, who has been doing churches for 30 years now.

As far as colors go, Amistoso used beige, peach and several shades of red. These colors are also prevalent in a number of Latin American churches.

“Real gold leaf would cost us 20 times more,” he said. “Since we couldn’t afford the real thing, I settled for faux golf leaf instead. It still shines as bright and is made of laminated metal.”

Cynthia Villar has yet to compute the structure’s total price tag. Its construction, including a small museum to house a relic of San Ezekiel, was financed mainly by dividends from family-owned Vista Land.

“I guess it would be safe to say that we spent a minimum of P200 million to do this,” said the first-term senator and former Las Piñas representative.

Although San Ezekiel was a Spanish Recollect who died of cancer in Monteagudo, Spain, in 1906, the Villar couple considers him one of the country’s own after he spent 15 years of his priesthood doing missionary work all over the Philippines from 1870 to 1885.

Cynthia, a native of Las Piñas, feels a personal affinity to the saint because he was parish priest of the then seaside town from 1876 to 1879.

After seeing for himself the devastating effects of a drought in the area, San Ezekiel also oversaw the building of the still existing Molino dam along the boundary of Las Piñas and Bacoor.

After his assignment in the Philippines, the future saint sailed to Colombia to continue his missionary work. He went back to Spain in 1888 to later head the Recollects in Monteagudo.

A few years before his death in 1906, San Ezekiel was diagnosed with cancer of the palate. He spent his remaining days in prayer. The saint’s bedroom and part of the building where he presided over have been turned into a shrine.

The Villars know San Ezekiel’s story too well. They also envision their new church to become a place of devotion for cancer patients and survivors.

But it was during a trip a few years ago to Monteagudo, where they were hosted for lunch before being shown around the shrine by a group of Recollects, that they became finally convinced to build the church.

“Up to now, I can’t fully explain what I felt when the Recollects toured us around,” said Manny Villar. “The experience further inspired us to build a church for San Ezekiel. His life and works need to be remembered. He deserves it.”

Cynthia Villar, a practicing Protestant from the United Church of Christ in the Philippines, sees no conflict in her involvement. She and her husband are also members of the Catholic-sanctioned Couples for Christ.

“OK lang,” she said. “My husband is a Catholic and I’m quite close with the Recollects. They have been very nice to us even before this church was built. In fact, architect Amistoso has been kidding me about it. He said I’m the only Protestant he has encountered who cares enough to have a Catholic church built.”