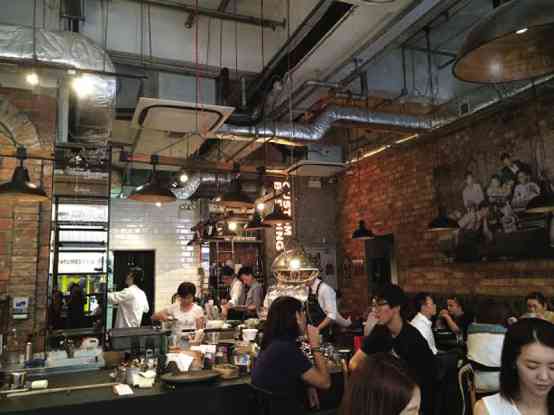 THE INTERIORS of The Coffee Academics in Causeway Bay

Discovering a different side to Hong Kong

For many Filipinos, Hong Kong is the gateway to the world. Its proximity and reasonable foreign exchange rates make it the perfect initiation for any wannabe traveler.

For shopping, HK has always been a mecca for all things unavailable in the Philippines, and Cantonese food is a longtime favorite. Plus, HK has a real winter, and we can wear our coats and boots without traveling too far from home.

On a recent trip, we saw parts of the city that are “hidden in plain view,” because we’re usually too busy at our go-to places to notice them.

Cathay Pacific recently started offering Premium Economy seats, which makes traveling to HK and the world more comfortable. The wider seats have a 38-inch pitch, which is a full six inches more than regular economy, plus a larger meal table, power outlet and extra stowage space.

On the ground, Premium Economy passengers get priority check-in and boarding plus more baggage allowance.

Upon arriving in HK, we went straight to the OZO Wesley Hotel in Wan Chai, once known as the red light district but without the air of seediness at all—more an extension of the nightlife one might find in Lan Kwai Fong.

We stumbled upon a café called The Coffee Academics, which has branches in Causeway Bay, Wan Chai and Tsim Tsa Tsui. It has a loosely Italian food menu, with champagne, dessert wines and whiskey, and some of the best coffee in the city. Aside from its signature HK blend (roasting the beans is done in a little room next to the café), it also supplies coffee to other establishments.

We stopped here for a quick break and late lunch of artichoke and pesto pizza, curly fries and an assortment of drinks. We enjoyed an iced chocolate which cooled us down on that warm day.

HK is a great place for walking, something that we wished was possible in Manila. We walked around Causeway Bay until we found ourselves looking up at Batman, who was staring down at us from the clock at Times Square. Turned out it was the 75th anniversary of the Caped Crusader, with the batmobiles on display as well.

On the 13th floor of this gigantic floor is Modern China restaurant, where we had a nine-course menu of updated Chinese fare. Standouts were the black truffle fried noodles, the baked crab meat with cream sauce and the really tender Angus beef with garlic.

Aside from the high-street giants and fancy designer shops we all know and love in Central, there are also smaller, more hidden boutiques that only locals, or those who are adventurous enough to get lost around SoHo, would find.

We started out at The 9th Muse at Lyndhurst Terrace, where one of the owners, Charlotte, walked us through her online and offline store that was chock-full of cute, collaborated pieces, from one-of-a-kind jewelry to scarves and sunglasses.

We then walked down the street to a shop called G.O.D (Goods of Desire). The shop is full of kitschy-cool HK pride meets Urban culture homeware, clothing and other knickknacks.

Down Gough street is one of my favorite HK finds, a store called Homeless which specializes in lifestyle goods such as furniture, kitchen accessories and a whole bunch of other things that will make you swoon, like the macaron-shaped powerbanks and folding Pantone kids’ chairs.

It’s easy to miss Callixto unless you are walking down one of Central’s many staircases that connect streets together. Between Gough and Hollywood Road is Mee Lun Street, where you will run into the bright pink store selling goodies, sourced by the owner from all over the world, from Uzbekistan to India and beyond.

After a full morning of shopping, we wanted to see WWF’s “1600 Pandas” exhibit, and we were told that it was at PMQ. We saw the cute black-and-white exhibit on the tail end of its HK stop.

We realized that we were in between two buildings with five floors each—filled with shops, creative offices and restaurants.

PMQ, it turned out, stands for Police Married Quarters; it formerly housed newly married members of the HK police force.

It is now part of the “Conserving Central” campaign; each space is rented out to a budding new designer, creative company or restaurant with a fun or interesting concept to promote development in Hong Kong’s creative industry.

Standouts here are 513 Paint Shop, specializing in organic paint; The Refinery, with its cute and cheeky purses shaped like pancakes and mock designer graphic tees; and Smith & Norbu, which offers handcrafted, custom natural horn frames for those who love glasses.

We ate at a small restaurant called Tai Lung Fung, whose entire concept, from the menu to dining arrangements, is based on how Chinese workers of the past would eat their food. We sat on benches and ate from old-school clay pots stacked on top of each other.

It was delicious and definitely an interesting experience.

We knew HK has a few beaches, but never did we go here to pack a bikini and sunscreen. But apparently many people do, and Shek O Beach is definitely worth the drive out of the city, even just for half a day.

There were a lot of people out that Saturday, but our guide Joe said that once school holidays start, it would be packed.

If you are in HK for longer than three days, a trip to the beach is a welcome break from the pavement pounding you will be doing while shopping.

If you get hungry, there are little sidewalk kiosks that offer grilled seafood, or you can head over to the popular Shek O Chinese and Thai Restaurant for tasty home-style Chinese and Thai cooking.

HK is not all just high street and brand names. This fast-paced city also has smaller boutiques and cafés that are worth going off the beaten path for.

Next time you head over, remember to keep your mind open and eyes peeled, and get to know the Hong Kong that you haven’t been before.

On the way home, don’t forget to check out one of the Cathay Pacific lounges in the HK airport. I particularly like The Wing, where there is a ramen and ice cream bar right next to it.

Special thanks to Cathay Pacific and the Hong Kong Tourism Board