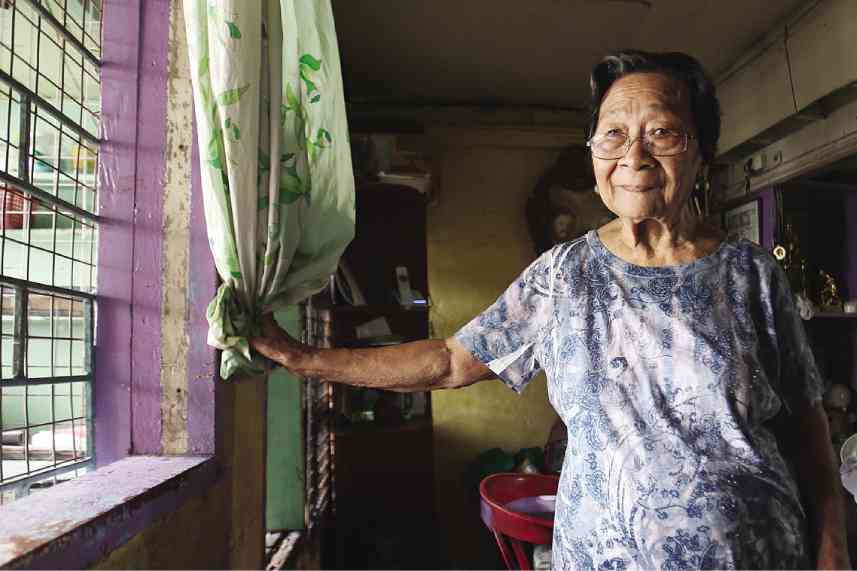 There are heroes outside battlefields—ordinary, everyday heroes who strive to change the world through their own simple ways.

Such is elderly leader Presentacion “Presing” Capistrano of Samahan ng mga Nakatatanda sa Pasadena (Samahan), an organization that aims to promote the welfare of the elderly in Barangay Pasadena in San Juan City. She cofounded the group with husband Dominador “Doming” Capistrano in 1992.

In 2002, Presing stood before world community organizers at an international forum on aging in Madrid, Spain. She could still recall the crowd’s warm reception after she delivered a speech highlighting Samahan’s key projects, showing the world how Filipino elders had continued to contribute to nation-building despite their frail bodies.

Now 85, she remains a picture of today’s hero, earning the merit of being one of the three chosen most inspiring nominees in the search for the Inquirer’s Heroes ’R Us that ran from Aug. 15 to Aug. 21.

She was nominated by Edward Gerlock, a former priest and the founder of Coalition of the Services of the Elderly (Cose).

“She is ever faithful in organizing community-based programs. She is a leader and a role model. She has remained active at 85 years old. The purpose of organizing people is to also keep them active in the community. So when I saw that you were looking for an everyday hero, she was my top choice,” said Gerlock, now a Cose advocate officer.

Presing is a former home economics teacher who moved to Manila from Bicol after settling down with Doming. They put up a small sari-sari store beside their house in Barangay Pasadena, a squatters area where floodwaters reach as high as the house ceiling due to its low elevation.

Poverty has not stopped Presing from standing up for what she believed in.

Living in a two-story home with three of her six children, she continued to be a hero in her community by promoting the basic rights of the elderly and organizing livelihood projects for the urban poor community of elders in Barangay Pasadena.

When Doming, the group’s founding president, died in 2002, she took over the organization.

“The group was formed upon the insistence of two Filipino seminarians, who were also members of Cose,” Presing, who at times had to pause at length to recall events, told the Inquirer in an interview at her home.

Samahan is a member of the Confederation of Older Persons’ Associations of the Philippines (Copap), which organizes community-based programs with its partner Cose, a nongovernment organization (NGO) that promotes the participation of the elderly in a community.

Presing recalled how the organization almost failed to take shape, as she and her husband were able to gather only 23 members, below the quota of 30 elders aged 60 and above imposed by Cose.

But the pressing advocacy and vision of the couple for the poor elders were bigger than any technicality. Today, Samahan counts some 60 members. In 1995, their membership soared to 100.

According to Presing, some elders in Pasadena survive each day without enough food and proper medicine. This everyday image prompted her to start the group’s pilot program, the Income-Generating Projects (IGP).

“Each member had a task in the making of the pillows: Some would cut the foam, others would sew the pillow case and the rest would place the foam into the pillow case,” Presing said.

Their pillows reached as far as Bataan, Bicol and even Davao. “We even had a stall along Araneta Avenue and we displayed our pillows for sale there along with other products, such as multicolored rags,” Presing said, adding that the pieces of foam they used were scraps from a factory owner who is a friend of Gerlock.

When the factory was shut down, Samahan had to come up with new income-generating products to sell, which included herbal soaps and dish-washing liquid.

She said members were trained for different projects so that each one in the group would be involved.

Elderly pageant is a hit

Presing could no longer recall how much they profited from these projects. But if there was one thing she could not forget, it was the money the group collected from a pageant that featured elderly women. The pageant was organized to raise funds for burial services.

“In one of the pageants we held, we raised as much as P50,000. We were really surprised,” Presing said.

She proposed the program after the monthly collection of P350 per member did not meet the target budget for the burial services, she said.

The income generated from Samahan’s projects is deposited in a local bank. The funds are withdrawn only when members are in dire need of money, which is often for medical expenses.

The elders’ recurring problem with their health bills is at the core of Samahan’s advocacy to uphold senior citizens’ rights.

“We pushed for the passage of a bill that would provide old people more benefits and privileges, such as social pension,” Presing said, referring to Republic Act No. 9994, or the Expanded Senior Citizens Act of 2010 authored by former Sen. Edgardo J. Angara.

The law mandates that indigent senior citizens like Presing should receive P500 a month for their daily needs.

Gerlock recalled the day Presing and the group’s members went to the Senate to meet Senator Angara to lobby for the passage of the bill.

“Can you imagine urban poor women confronting the senator …. The whole 25 years [of Cose] was worth that one moment to see,” Gerlock said.

Visiting community leaders from Africa and the Netherlands have also heaped praise on Samahan, Gerlock said.

“The people from the Netherlands were impressed with how the members are involved in the programs, with how they help one another. The Netherlands has good programs for the elderly but there is no community involvement,” Gerlock said.

Cose is a member of HelpAge International, a rights-based international NGO with the same advocacy. It was HelpAge that chose Presing to be the Philippine representative to the Second World Assembly on Aging convened by the United Nations in Madrid in 2002.

Gerlock said HelpAge wanted to send someone from a grassroots organization and not from the government because community leaders would share programs based on their experiences.

“A lot of people hugged me,” Presing, who currently sits as adviser of Samahan after she stepped down as head in 2007, said, recalling the audience reception after her speech. She added that they complimented her speech for being “very good and very clear.”

The fear of aging