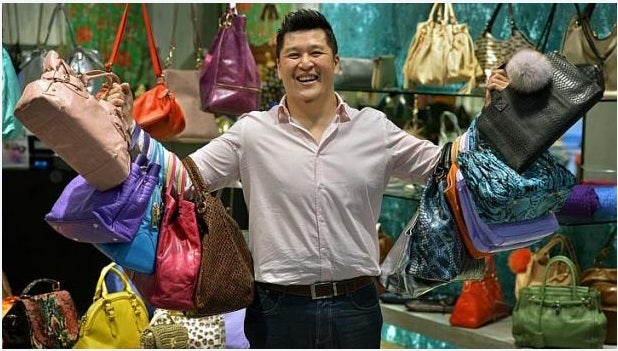 Mr Jimmy Lim has come full circle from his boyhood days being surrounded by clothes from his mother’s factory consignments to being a bodyguard to being the co-owner of a fashion handbag business. PHOTO: KUA CHEE SIONG

MANILA, Philippines – When police officers retire or leave the force, many of them choose a second career related to law enforcement.

But in Singapore, an 18-year veteran macho cop opted to be radically different: He sells handbags.

The Straits Times reported Sunday how Jimmy Lim changed his “sartorial habits,” “overhaul his mindset” to fit into the business of women’s fashion.

A few years ago Jimmy Lim’s rigorous training would kick into gear whenever he was out in public.

His ears would be cocked, his eyes would sweep the surroundings for signs of trouble. Fit and swift, the taekwon-do exponent and expert marksman would draw his pistol if he needed to.

As an elite officer from the Singapore Police Force’s Security Command (SecCom), his job was to ensure the personal safety and security of Cabinet ministers and visiting dignitaries.

Lim served 18 years in the police force before he left three years ago.

When he steps out these days, his eyes still dart. But instead of looking out for shifty characters and would-be attackers, he susses out women’s handbags.

He scrutinizes the shapes, the materials they are made of, the way they are stitched and their embellishments.

“I can’t help staring at handbags, especially when I get into lifts. My wife sometimes glares at me,” the 43-year-old says.

For the record, he does not have a handbag fetish. But like any driven and enterprising owner of a women’s handbag business, he just wants to know who is carrying what and why.

Together with his wife, Madam Grace Guo, he runs Gracious Aires, which started out as a modest pushcart business more than 10 years but now has two shops, in Raffles City and Plaza Singapura. Its annual turnover is more than $1 million.

Madam Guo, 39, charts the creative direction and designs the bags, while he oversees operations.

It was not just a simple matter of switching trades: He had to change his sartorial habits, overhaul his mindset and, in his own words, “learn to chill a little”.

“In the police force, I worked with yes men because teamwork and discipline are very important. But service staff are a different kettle of fish, especially with the tight labor crunch. You can’t discipline them, you have to ‘sayang’ them,” he says, using the local colloquialism for “pamper”.

But being a practical soul, he is adapting.

He is the youngest of three children. His late father was a taxi driver, his mother a retired seamstress.

“My mother used to get consignments from factories to sew raincoats so our three-room flat in Ang Mo Kio was like a mini sewing factory when I was growing up. There were three sewing machines in the kitchen and one in the living room. My two sisters and I had to help,” recalls the sturdily built man who was already dexterous with the sewing machine when he was nine.

The small flat was also filled with heaps of tailored clothing. “The clothes always came with needles, so we had to be very careful when we walked if we did not want to get pricked. I got pricked so often, I developed a phobia for injections,” says the former student of Sembawang Hills Estate Primary and Zhonghua Secondary.

There was not much time for a social life outside school. When he was in his early teens, his parents decided to take over an uncle’s stall selling kway chap (broad rice noodles with braised meat and innards) at a coffee shop in Serangoon.

“My mother made everything from scratch. I remember our kitchen used to stink like a pig farm because it was filled with buckets of pig’s intestines, which had to be washed and cleaned,” he says.

Besides serving at the stall, his chores included peeling onions, garlic and ginger to prepare a big pot of chilli sauce a couple of times a week.

The secret to a punchy chilli sauce? “The chillies must be fresh, the ginger old and the proportion of vinegar, garlic and onions just right,” he quips.

Although the stall was a big hit with foodies, it had to close a few years later because of an outbreak of swine flu. Customers stayed away for a couple of months, which prompted his parents to call it a day.

His father went back to driving a taxi; his mother became a baby-sitter.

The family’s financial difficulties were one of the reasons Lim – who had by then graduated with a diploma in mechanical engineering from Ngee Ann Polytechnic – signed on with the police force when he was called up for national service in 1992.

He adds, with a twinkle: “And after sewing and kway chap, I told myself I needed to do something more macho.”

Upon completing his training at the old Police Academy in Thomson Road, he was deployed as a constable to Geylang Police Station.

“We did a lot of ambushes and raided a lot of brothels and illegal gambling dens. Now what you see on TV, of cops kicking doors in when they go on raids… now that’s true,” he says with a laugh.

Bodies were also a common sight.

He recalls an incident when he and his senior went to investigate a foul stench at a flat in Circuit Road when he was a rookie.

“I peeped under the door and thought I saw a black sofa. Then there was a gust, and I nearly fainted from a really foul smell. We broke the door open. What I thought was a black sofa was actually the dead body of an old man. It had already started decomposing and maggots had set in,” he recalls, shuddering at the memory.

After seven years, he was posted – after a stringent selection process – to the SecCom to become a personal security officer. “Back then, I was very fit,” he says, glancing down at his still buff but now stocky body.

Besides being adroit with firearms and the art of self-defense, personal security officers are also trained in other areas such as contact drills, firearm assault and tactical driving. Their job is to protect VIPs at all costs.

Although he declines to go into detail, he lets on that the new job proved a lot more interesting and challenging.

He went through some dangerous situations. On one occasion in a neighboring country, the vehicle he and his VIP were in ran smack into a mass of angry street protesters. “We had to get out, and do so discreetly. Making a scene would just have alerted the mob that, ‘Hey, these guys are running away from us.'”

On another occasion, also in a foreign country, he had to draw his pistol. “We were on the road and were told there were dead bodies ahead. We were led by the local police and didn’t know the full facts, but the decision was made to proceed and engage if necessary,” recalls Lim, who did well and was promoted to senior officer.

Assigned to protect many ministers during his 12-year stint, he loved his job.

“I got to meet very well-known people and go to interesting places. Li Ka Shing once shook my hand in a lift,” he laughingly lets on, referring to the Hong Kong billionaire. “I was standing next to my famous protectee; he was probably wondering who I was.”

However, there were some factors, mainly family, pulling at him. The job involved long hours and required him to be away from home often.

“At one stage, for more than a year, I reached home only when my children were in bed,” recalls Lim, who has two children, aged 13 and 14. “I didn’t know how tall they were.”

Once, his son fell and suffered an 8cm gash on his head. “I saw him in hospital but the look he gave me was, ‘Where were you?'”

Another time, he did not know that his wife had fainted from fatigue while running Gracious Aires and had to be hospitalized while he was away on assignment.

“My family didn’t tell me. They didn’t want me to worry,” he says.

Three years ago, he finally decided to call it a day so that he could join Madam Guo, who quit her job as an interior designer to set up Gracious Aires in 2002.

“She really needed my help,” he says.

Lim waded into business at a challenging time.

On paper, the business was doing well. His wife had expanded from a pushcart selling imported handbags to three outlets selling her own designs.

But a decision to take up two units for three years at Orchard Central was costing them dearly because there weren’t enough shoppers there.

“It injured us very badly financially. We had to pour all our profits from our other outlets into this one. I even put my gratuity into the business,” he says, referring to the lump-sum payment he received on leaving the police force.

The losses – amounting to about $500,000 – and his shaky start in business gave him many sleepless nights.

“I lost confidence in myself. I didn’t know a thing; even the most junior salesgirl knew more than me. Grace had to teach me everything. I learnt from scratch – that is a tote, that is a satchel,” he says.

Used to an environment where discipline, commitment and drive are prized, he also had trouble managing staff, all of whom were women.

“I chased away a lot of staff because I was very direct. I’ve cooled down a lot,” he says, as his wife nods in agreement.

It did not help that he was extremely embarrassed about what he did for a living.

“Our shop in Plaza Singapura is around the corner from the Istana, where many of my colleagues worked. During lunchtime, many of them would come here. I would plant myself elsewhere. I was a senior officer and I didn’t want the younger officers whom I used to command to know what I was doing,” he says.

His wife, however, encouraged him to persevere, get rid of his hang-ups and even talked him into getting a newer, trendier wardrobe.

Once their contract with Orchard Central ended, husband and wife re-strategized. They decided to operate just two outlets, at Plaza Singapura and Raffles City, both of which are now doing swimmingly.

“I’m actually starting to enjoy this. I’ve learnt so much about bags, not just about design, but about leather and new technology to make them,” says Lim, who travels to South Korea with his wife several times a year to liaise with manufacturers and material suppliers.

He already has plans to set up an online shopping portal for his bags.

The embarrassment he once felt about being a handbag man is now gone. In fact, almost all the pictures he now posts on his personal Facebook page are of totes, buckets, clutches, hobos and sling bags in all shapes, sizes and colors.

The former Mr. Macho has just one more wish: to design a best-selling woman’s bag himself soon. – Wong Kim Hoh, The Straits Times