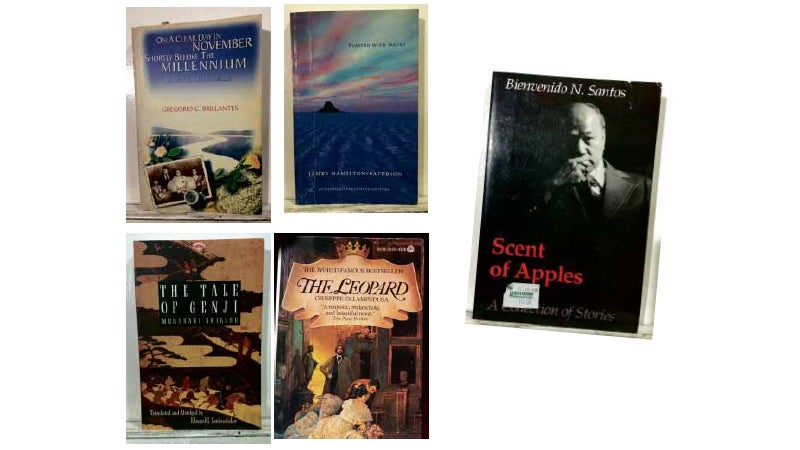 COLLECTION of more recent stories by Gregorio Brillantes; “Playing with Water: Alone on a Philippine island” by British writer James Hamilton-Paterson; US-published short story collection of Bienvenido Santos; “The Tale of Genji” by Murasaki Shikibu,” translated into English by American Japanophile Edward Seidensticker; and Giuseppe Di Lampedusa’s “The Leopard,” about the Risorgimento

My Top 101 Books (not necessarily in order)

1. “My Antonia” by Willa Cather

4. “For Whom the Bell Tolls”  by Ernest Hemingway

5.  “How Green Was My Valley” by Richard  Llewelyn

11. “The Decline and Fall of the Roman Empire”   by Edward Gibbon

14.  “Culture and History” by Nick Joaquin

15. “A Question of Heroes” by Nick Joaquin

16. “Playing with Water: Alone on a Philippine Island” by James Hamilton-Paterson

17.  “How My Brother Leon Brought Home a Wife” by Manuel Arguilla

18.  “Without Seeing the Dawn” by Stevan Javellana

19. “Breaking the Silence” by Lourdes Montinola

31. “The Children of Sanchez” by Oscar Lewis

33. “The American Language” by Henry Mencken

35. “The Grapes of Wrath” by John Steinbeck

36. “The Wayward Bus” by John Steinbeck

37.  “Gone with the Wind” by Margaret Mitchell

38. “One Day in the Life of Ivan Denisovich” by Alesandr Solzhenitsyn

40. “Crime and Punishment” by Fyodor Dostoevsky

42. “America Is in the Heart” by Carlos Bulosan

45. “The Leopard” by Giuseppe Di Lampedusa

48. “Twilight in Jakarta” by Mochtar Lubis

49. “The Picture of Dorian Gray” by Oscar Wilde

55. “The Analects” by Confucius

56. “Heart of Darkness” by Joseph Conrad

59.  The Yoknapatawpha novels by William Faulkner

60. “The Wretched of the Earth” by Frantz Fanon

64.  Sonnets by by William Shakespeare

69.  “The Untold Story of Imelda Marcos” by Carmen Navarro Pedrosa

70. “The Enigma of Japanese Power” by Karel van Wolferen

77. “The True Believer” by Eric Hoffer

79. “The Tale of Genji” by Murasaki Shikibu

81. “From Here to Eternity” by James Jones

85. “The Alexandria Quartet” by Lawrence Durrell

89. “The Company” by Mary McCarthy

93. “ The Lonely Crowd” by David Riesman

95. “Darkness at Noon” by Arthur Koestler