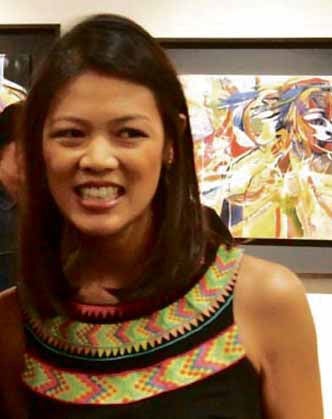 “My artistic and intellectual pursuits are grounded in a simple sense of purpose: To be fully alive,”  Jana Benitez said in a 2012 interview.

Two years later, it is clear that the 28-year old artist has maintained her focus.

When you see “Life Force,” her latest exhibit at Ayala Museum, you can’t help but be caught up in the exuberant vitality on display. A riot of strokes and vivid colors framed in 35 large-scale paintings captures the energetic exhilaration of the artist.

Through her works, Benitez expresses the metaphysical, spiritual and humanistic ideas that a Greater Intelligence is directing her toward. This Life Force, she says, is the weft that weaves all things, a creative fount available to one and all if unimpeded and allowed to flow freely.

Her goal now is to get out of the way as much as possible. “I’m letting go and allowing something greater than I am to express itself,” she says.

Akin to Abstract Expressionism in its spontaneity and almost subconscious creation, Benitez’ work, however, doesn’t share the movement’s nonfigurative stance. Although abstract explosions of lines and colors have been a dominant feature of many of her exhibits, Benitez has continuously demonstrated a firm grip on the figurative style, as in her 2012 work “Lola.”

Even now, figurative references lurk underneath the outburst of abstraction produced by her impulses and instinctive gestures. Facial features emerge from the forceful sweep of her brushstrokes.

As you keep looking, changes seem to occur. Did that face just change direction and is looking another way now? Are there two, perhaps even three, faces you see? Is there one figure dancing, or are they a couple intertwined?

In a Jana painting, all of the above might be true. Faces and figures are nebulous, barely perceptible, open to interpretation.

Benitez’ oeuvre has always teetered between the figurative and the abstract, and she has managed to reconcile both forms to create her own visual vocabulary.

“White Phoenix” is a torrent of bleached tones interacting in a flurry of energy.

In “Intuition,” there is just a vestige of a figure in a lotus position, discernible only to the observant eye. Once perceived, the image is incised in the memory.

In “Triumph,” clearly observed are two figures arising from amidst a swirl of expressionistic motion.

In “Life Force,” Benitez once again communicates in her own idiom, moving comfortably between abstraction and representation.

We see in this exhibition a more mature Benitez. As one who had her first public showing at 12, Benitez has through her years of painting and exhibition emerged with a broader context than the purely personal. A deep empathy for the yearnings of the human condition, coupled with a very vital outlook toward life, marks this show.

Sixteen years of delving in philosophical and art studies and different realities have enabled Jana to evolve into a sensitive, emotionally mature young woman with a broad perspective. And now she aims to impart universal truths she’s drawn from her studies and experiences.

A cursory look through her résumé reveals an upper-tier education and suggests wide-ranging travels. In search of herself and life’s deep meaning, she has engaged in experiences different and diverse.

Backpacking across Europe, camping in primitive conditions in New Mexico, studying Taoism and learning martial arts in a temple in Wudang, China, apprenticing in the Pataka Museum of Maori and communing with nature in New Zealand—of such are her immersions. All of these have informed her creative process.

Benitez now takes us on a journey toward the making of her artwork—the pilgrimage being of equal importance as the product. In the vigorous lashes and strokes, in the unabashed hues on the canvas, we have a physical residue of Benitez’ interior trek and existential struggle.

“Chrysalis,” “Through Lifetimes,” “Intuition,” “Wind Tides,” “Steadfast,” “Finding Center,” “Triumph,” “Exuberance” are some of the titles in this exhibit. They intimate the creative process the artist has been through, and the confident, victorious place she now finds herself in.