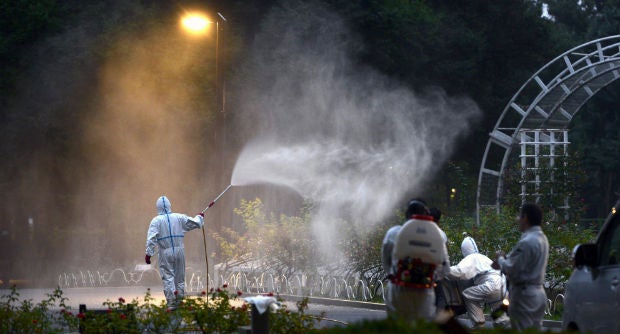 In this Thursday, Aug. 28, 2014 photo, a worker sprays insecticide to get rid of mosquitos to prevent dengue fever at Yoyogi Park in Tokyo. According to local media reports, Japanese health authorities announced on Thursday they confirmed two more transmitted cases of dengue fever, a day after the authorities have reported the first locally transmitted case of the illness in the country in more than 60 years. They are believed to have been infected after being bitten by mosquitoes at the park. AP/Kyodo News

TOKYO — An outbreak of dengue fever in Japan — the first since World War II — could have affected up to 20 people, media reported Monday, as officials confirmed three more cases.

The new cases, who are in their teens or 20s, are all believed to have visited Tokyo’s Yoyogi Park, one of the major green lungs of the metropolis, which is popular with residents and tourists alike.

The park, one of the largest open spaces in central Tokyo, is believed to be the source of the mosquito-borne disease.

The first three sufferers had also visited the park, where Tokyo officials have now sprayed about 800 liters (210 US gallons) of pesticide in a bid to kill off the insect colony.

None of those found to have contracted dengue is in a life-threatening condition, officials have said.

TV Asahi reported that as many as 20 people could now have been infected.

The last domestic infection of dengue fever was in 1945, although there are around 200 cases annually among Japanese who have travelled abroad, mainly in Southeast Asia.

Dengue fever is not transmitted directly from person-to-person and symptoms range from mild fever to incapacitating high temperatures, according to the World Health Organization.

There is no vaccine or any specific medicine to treat dengue and patients should rest, drink plenty of fluids and reduce the fever using paracetamol, it says.

The disease is carried by the tiger mosquito, which is endemic to Japan.

Meanwhile, shares in home pesticide maker Fumakilla were up 20.00 percent at 420 yen on the Tokyo Stock Exchange. That follows a nearly 25 percent rise one day last week.