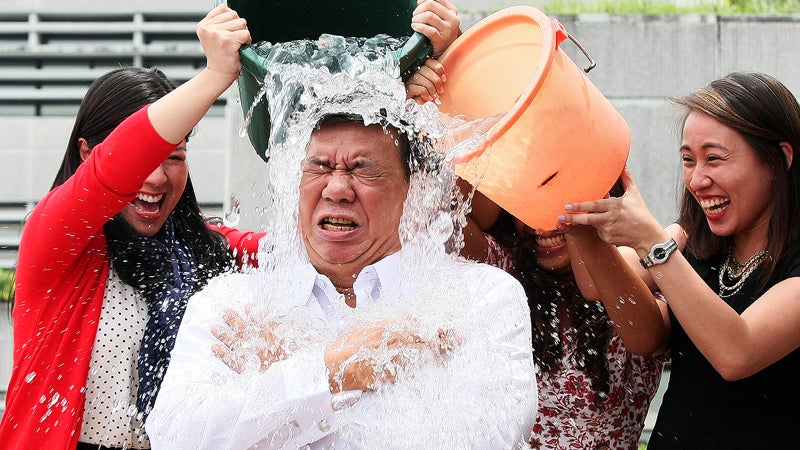 LOVING THE COLD WATER Senate President Franklin Drilon hardly looks like he relishes a dousing of ice cold water from two women staffers. Like others before him, Drilon promised to donate an unspecified amount of money for taking up the ALS Ice Bucket Challenge. JOSEPH VIDAL/PRIB

MANILA, Philippines–No harm getting cold and wet for a good cause.

Clad in a white barong, Drilon got himself drenched, trembling in the cold, after two female staffers poured buckets of ice water on him at the terrace of his Senate office before noon.

“It’s cold,” he said as he draped a towel on his shoulders.

It was all in the spirit of fun and advocacy.

Drilon joined a growing number of Filipinos who have taken the Amyotrophic Lateral Sclerosis (ALS) Ice Bucket Challenge not only to raise funds and promote awareness of the disease, but to call attention to other causes.

Putting a twist to it, Drilon said he and his staff used rain water collected over the weekend—instead of fresh potable water—for the charity challenge.

To comply with the rules, Drilon promised to donate money to Philippine General Hospital’s Neurology Center, which treats Filipinos with neurological afflictions.

He refused to mention any amount.

Then Drilon issued the challenge to friends who share the same advocacies he espouses.

“First, I will challenge Tony Meloto of Gawad Kalinga. Why? Because we have a common advocacy. We’ve built 1,000 low-cost housing units in Iloilo for 1,000 families and the village is managed by Gawad Kalinga,” Drilon told reporters before he strode out to the terrace for the challenge.

“Second, I wish to challenge my good friend Gina Lopez. Again, we have a common advocacy. She’s cleaning up the Pasig River while we are cleaning up the Iloilo River. We have exchanged ideas on practices and good methods on how to clean up those rivers,” he added.

“Third, I would challenge Alfonso Sy of the Filipino-Chinese Chamber of Commerce and Industry where I had a project with them where we built 1,600 classrooms with the help of my pork barrel. I allowed them access to my pork barrel to the tune of P250 million,” Drilon said.

Drilon said he and the chamber managed to build the classrooms at half the cost of government contracts.

It was Iloilo Rep. Niel Tupas Jr., who first called on Drilon to take the challenge, which is now sweeping the rest of the world.

The challenge entails pouring a bucket of ice water over a person’s head while another takes a video. Then one calls on three friends to do the same within 24 hours, or donate $100, or both.

As of Aug. 29, donations from all over the world to the ALS Association have topped $100 million.

Among international figures who have taken up the challenge were former US President George W. Bush and Facebook founder Mark Zuckerberg.

But former President and now Manila Mayor Joseph Estrada declined, saying there was no reason for him to douse himself with ice-cold water just to promote other causes.

Estrada said he had been supporting advocacy groups for years. “I don’t need to wash,” Estrada told reporters. “That challenge is just for show. It’s just for show-offs.”