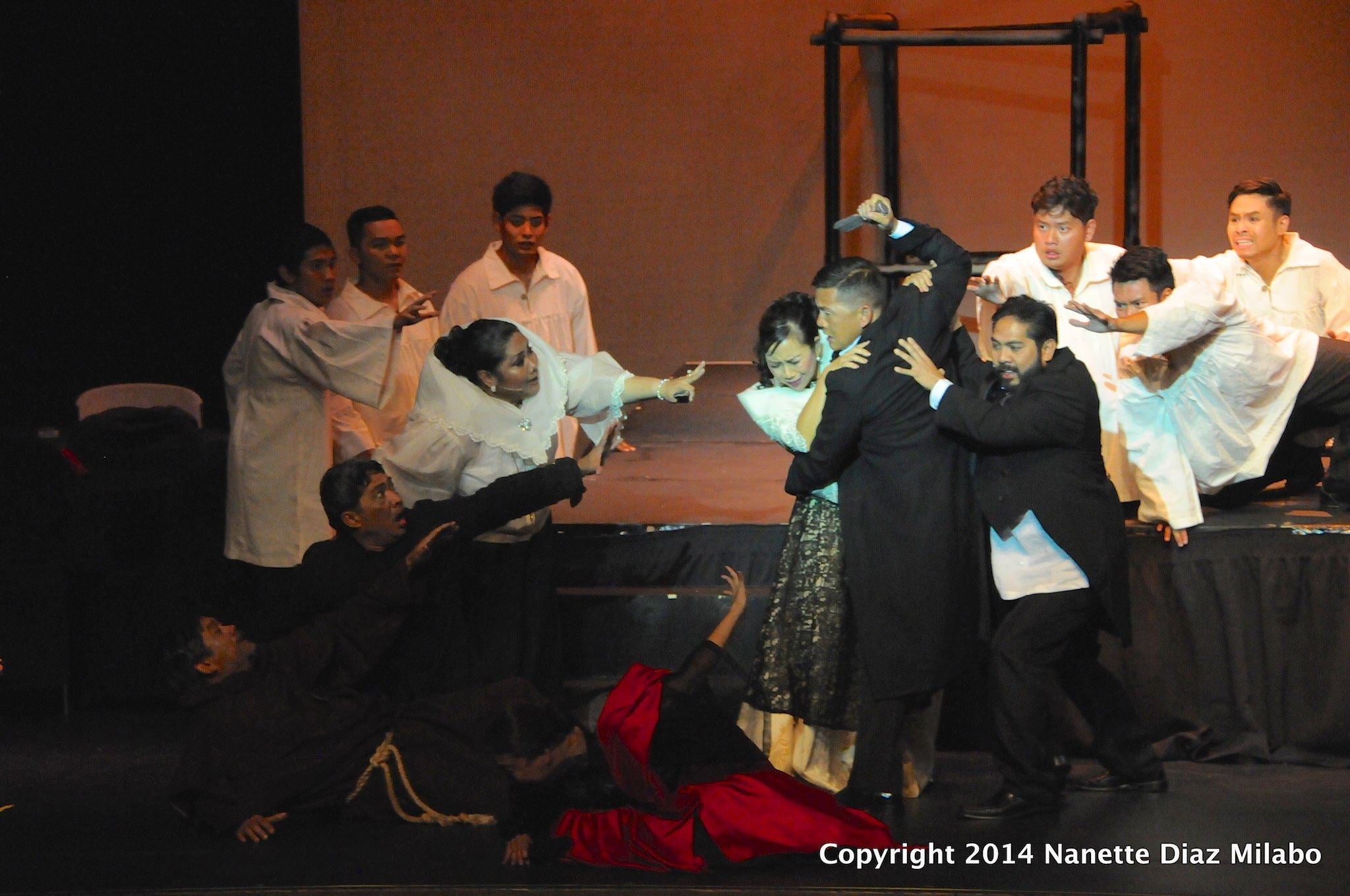 ‘Noli’ the musical gets standing ovation, raves in Los Angeles

LOS ANGELES, California — A mostly Filipino-American crowd gave a standing ovation and rave reviews to “Noli Me Tangere, the Musical” at its opening performance August 23 at the Aratani Theater.

The 870-seater Aratani was filled to capacity, and at curtain call, hundreds stood up and gave a resounding applause, many with tears in their eyes.

Playgoer Maricon Ramos said, “It makes me proud as a Filipino to lay claim to a musical as beautiful as this.”

Alan Llavore, meanwhile, admitted that there were parts that baffled him despite following the English supertitles projected on both sides of the stage. Nevertheless, he said, “It was worth watching and it will be worthwhile to re-read the Rizal books again.”

Based on the novel by National Hero Dr. Jose Rizal “Noli” was first brought to life as a musical by Felix “Nonon” Padilla (direction), Ryan Cayabyab (music), National Artists Bienvenido Lumbera (libretto), the late Salvador Bernal (production design) and Edna Vida (choreography). It was staged more than two decades ago for Tanghalang Pilipino, the resident theater company of the Cultural Center of the Philippines.

Teatro Pilipino USA produced the LA performance. Former Filipino theater artists and performers now residing in the US formed the company. It got the nod of the original creators early this year to restage the musical for the first time in the US.

While the lead stars in the musical were mostly former CCP artists, the chorus was composed of Filipino-American children, many of whom cannot speak Tagalog, let alone sing and understand the prose by Lumbera.

However, after months of rehearsals and script analysis, the Fil-Am kids were singing from the heart, taking pride in the Filipino culture they never knew.

Miguel Vera, who played the role of Crisostomo Ibarra, performed this part 20 years ago for CCP. His wife, Priscilla Salud, was the executive producer of the show along with Bernie Kimmerle who used to work for Repertory Philippines.

It was a family affair for Vera whose four children, Lorenzo, Nicolo, Sophie and Patricia joined the production. So with Joi Orbe-Brown who performed with her twin daughters, Gabriel and Muriel, and the Peyton brothers, Noel, Neil and Noah.

Playing the role of Maria Clara was Cristina “Kit” Navarro, a soprano known in the LA theater scene and who was formerly a member of the UP Madrigal Singers along with Annie Nepomuceno, who played Dona Victorina.

The US restaging was directed by Olga Natividad, a former resident artist of CCP and mentored by Padilla. Lighting design was made by Manny Eulalia, stage management by Mate’ Espina and Kimmerle while videography was done by Creative Concepts of Jet Montelibano, all former theater performers in the Philippines.

Salud who spoke before the curtains were raised said their production group’s objective evolved in their search to find what Filipino-Americans want in terms of entertainment.

Salud added that she would want Teatro Pilipino USA to continue to provide “entertainment with cultural and historical value which at the same time showcase Filipino talent and inspires the younger generation to develop a love for Filipino arts and music.”

Salud said there have been inquiries from as far as Canada to bring the musical there. The company may focus on California first, which has the biggest Filipino-American community in the US.

Noli, the opera, slated for Kennedy Center before Manila showing