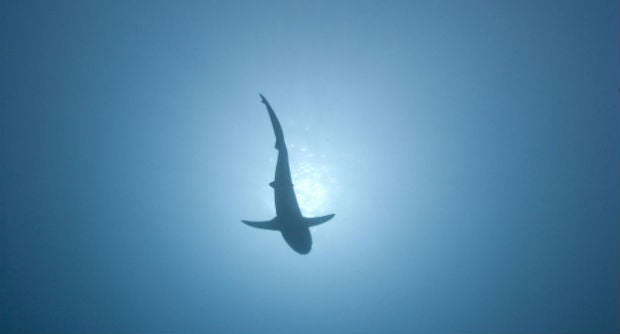 In this undated handout photograph received from Richard W. Brooks on August 27, 2014, a grey reef shark (C) is seen riding the incoming tide, to conserve energy, in the small Pacific island nation of Palau. Palau created the world's first shark sanctuary in 2009 and the move has been so successful that plans are now underway to completely ban commercial fishing in the island nation's vast ocean territory by 2018. AFP / Richard W. Brooks

Sharks off the menu and on the tourist trail in Palau

KOROR — In many places swimmers might prefer to avoid sharks, but wetsuit-clad tourists in Palau clamor to dive among the predators thanks to a pioneering conservation initiative that has made them one of the country’s main visitor attractions.

Palau created the world’s first shark sanctuary in 2009 and the move has been so successful that plans are now underway to completely ban commercial fishing in the island nation’s vast ocean territory by 2018.

The fishing-free zone in the northern Pacific, described as unprecedented by famed US marine scientist Sylvia Earle, will cover 630,000 square kilometers, an area almost the size of France.

The architect of the ambitious plan is Palau President Tommy Remengesau, who said the ban was needed to “let the ocean heal” after years of industrialized fishing in the Pacific that has seen stocks of some species such as bluefin tuna fall to critical levels.

Remengesau said Pacific island nations, which are also struggling to deal with climate change, were effectively “the conscience of the world” on environmental matters and had to lead by example because of their special connection with the ocean.

“The ocean is our way of life,” he said. “It sustains and nurtures us, provides us with the basics of our Pacific island cultures, our very identities.”

Just a decade ago, dozens of so-called “shark boats” regularly docked in Palau’s commercial center Koror, hanging fins to dry from their rigging as they worked to supply a seemingly insatiable demand in Asia for the primary ingredient in shark fin soup.

During the height of the trade, an estimated 73 million sharks a year had their fins hacked off and were thrown back into the sea to die.

“I would have been very upset to see that,” said Maayan Sagr, a 22-year-old Israeli tourist on a six-week dive master’s course in Palau, which is regularly voted the world’s top spot for underwater enthusiasts.

“The nature and the sharks are the reason I came here,” she said. “Everybody knows it’s quiet and peaceful but the main attraction is the sharks, getting to see them in their natural environment.”

Remengesau said Palau’s world-first shark protection measures sparked global change in attitudes towards the top predator, which went from being seen as a dangerous pest to a valuable part of the eco-system.

About one-third of the world’s countries have followed the Pacific nation’s lead in banning shark-finning, according to the Pew Environment Group.

Crucially, demand for shark fin soup in China has waned thanks to a ban from official state banquet tables and celebrities publicly speaking out against eating the dish, which is often regarded as a status symbol.

Remengesau said sharks had more value to Palau as eco-tourism assets, citing a 2011 study that found a single reef shark could contribute almost US$2.0 million to the economy over its 10-year lifespan via the dive tourists it attracts.

“We feel that a live shark is worth a thousand times more than a dead one,” he said.

While tourist numbers have climbed since sharks were protected, there have been no attacks on divers, with operators keeping visitors a safe distance from the creatures.

Earle, a National Geographic Society “Explorer-in Residence” who has led more than 100 oceanic expeditions in a career stretching back almost six decades, said it was the first time a government had committed to stopping commercial fishing in its waters.

“(There is) awareness in Palau that we need to protect the systems that keep us alive, to restrict what has clearly been unsustainable — taking the sharks, tuna and the ocean wildlife,” she said.

“I think it will set a standard and wake people up around the world… 50 years ago we thought the ocean was too big to fail, now we know there are limits to what we can take and still have an ocean that functions.”