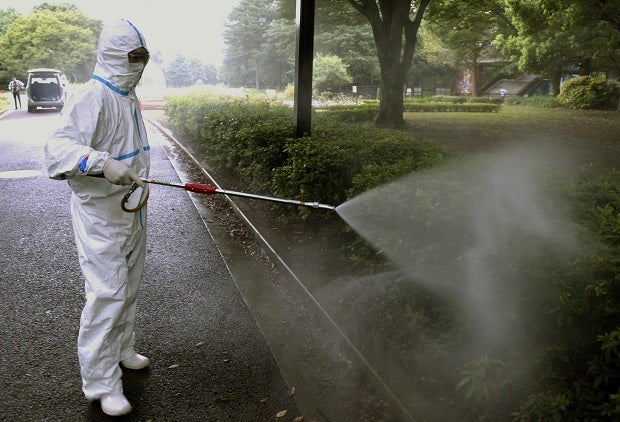 In this Aug. 28, 2014 photo, a worker sprays insecticide to get rid of mosquitos to prevent dengue fever at Yoyogi Park in Tokyo. Japan is urging local authorities to be on the lookout for further outbreaks of dengue fever, after confirming another 19 cases that were contracted at a popular local park in downtown Tokyo. (AP Photo/Kyodo News, File) JAPAN OUT, MANDATORY CREDIT

TOKYO — A worsening outbreak of dengue fever in Japan has claimed its first celebrities — two young models sent on assignment to the Tokyo park believed to be its source.

The details emerged as the government said Tuesday that at least 34 people have now caught the disease, which has not been seen in Japan for seven decades apart from cases contracted overseas.

The two women — Saaya, 20, and Eri Aoki, 25 — were sent to Yoyogi Park last month for the Saturday variety show on which they appear, the Nikkan Sports said.

A few days later, both came down with a temperature, it said.

Saaya, whose swimsuit pictures have made her a favourite in Japanese Playboy, blogged about her high fever last Wednesday before news of the dengue outbreak spread.

The revelation that the two beauties had succumbed to the mosquito-borne disease provided fodder for the self-referencing TV shows that fill daytime schedules in celebrity-obsessed Japan.

The health ministry said a total of 34 people had now been confirmed to have been infected by dengue fever, all of whom had visited Yoyogi Park, a popular green spot in crowded Tokyo.

Dengue fever, which is carried by the Tiger mosquito, was stamped out in Japan at the end of World War II, even though the mosquito breed remains endemic.

The symptoms range from fever to incapacitating high temperatures.

Tokyo officials have now sprayed about 800 liters (210 US gallons) of pesticide in the park to try to kill off the insect colony.