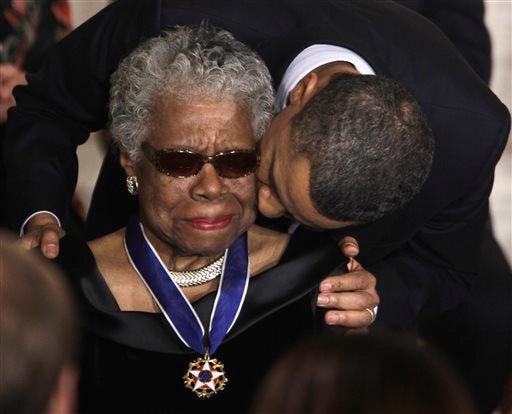 In a Feb. 15, 2011 file photo, President Barack Obama kisses author and poet Maya Angelou after awarding her the 2010 Medal of Freedom during a ceremony in the East Room of the White House in Washington. Maya Angelou’s iconic words and lyrics will be blended with hip-hop beats for a new album called “Caged Bird Songs.” AP

Shawn Rivera, the lead singer of R&B group Az Yet, and RoccStarr, who co-wrote Chris Brown’s “Fine China,” produced the 13-song set, to be released through Smooch Music on Nov. 4.

The album — the title taken from Angelou’s classic 1969 book “I Know Why the Caged Bird Sings” — is one of the last projects Angelou completed before she died in May, her grandson said in an interview Tuesday.

“Grandma loved it from the beginning,” Colin A. Johnson said of the album’s concept. “These guys were inspired by grandma’s work, which many people are, and felt like giving it a different medium of delivery to make it more obtainable to a larger group of people.”

Rivera and RoccStarr started working on the album before Angelou knew of it. Johnson, who is in charge of Angelou’s estate with his father Guy B. Johnson, said once she was aware, she completely backed the project, which was recorded at her North Carolina home. Some of the songs use previously recorded Angelou vocals, while others were recorded specifically for the project.

Johnson said Angelou’s initial reaction to the songs was similar to when she first saw her own Facebook page: “She just laughed.”

“She loved it and was excited to hear more about what they wanted to do,” he said of the album. “She had a lot of energy around it.”

Angelou won three Grammys for her spoken-word albums. She previously released a calypso album and collaborated with Ashford & Simpson for 1996’s “Been Found.” She also was featured on Common’s 2011 album, “The Dreamer/The Believer.”

Johnson said his grandmother was a fan of hip-hop music.

“She saw (hip-hop) as this generation’s way of speaking and conveying a message,” said Johnson, adding that Angelou had “great stories about interactions with Tupac (Shakur).”

Johnson said he hopes the album will connect Angelou’s work with younger generations. It resounded with his own 13-year-old and 16-year-old children, he said.

“I don’t know that they ever have picked up a book of poetry without it being assigned by either me or their school,” he said of his children. “To hear somebody that is so famous for her poetry and her message, and then set to some music that you can enjoy definitely feels like this is something that can continue her reach through generations.”

“There are other things coming out,” he said. “You’ll see a lot of other things come out with her name. … And these are all projects that she had out there in the works at various different levels of completion.”