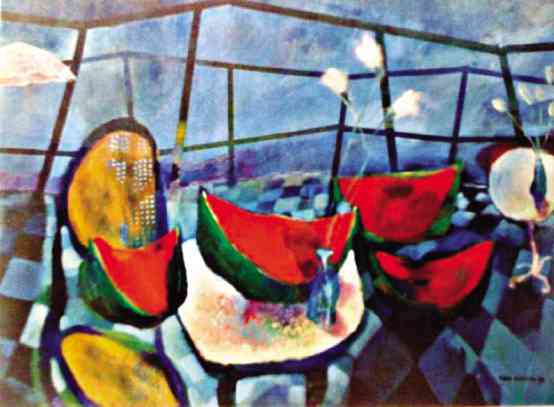 Thirteen select paintings by  figurative expressionist master Onib Olmedo will be featured in an exhibition, “Onib Olmedo: Selected Works from the Seventies to the Nineties. A Commemoration of His 18th Death Anniversary,” on Sept. 5-21 at Galeria Lienzo, 2/F Serendra, Bonifacio Global City.

Acclaimed by critics as a major Filipino artist of the 20th century, Olmedo garnered all significant local awards in his lifetime including those given by the Cultural Center of the Philippines, Art Association of the Philippines, Mobil Oil Philippines. He was accorded an award in the prestigious Internationale Exposition des Peintures in Cagnes-sur-Mer, France.

Olmedo created a body of work that utilizes the expressionist technique of distortion to portray the inner torment experienced by modern man. His paintings are characterized by an implosive impact but have an uplifting and ennobling quality, celebrating the triumph of the human spirit in the face of pain and anguish. At the same time, they are social commentaries with touches of wit and irony—reflections of the artist’s quintessential, down-to-earth humor.

Olmedo died in 1996 when he was only 59 years old. His paintings continue to influence the art scene with a new generation of artists who are self-confessed Onib disciples.