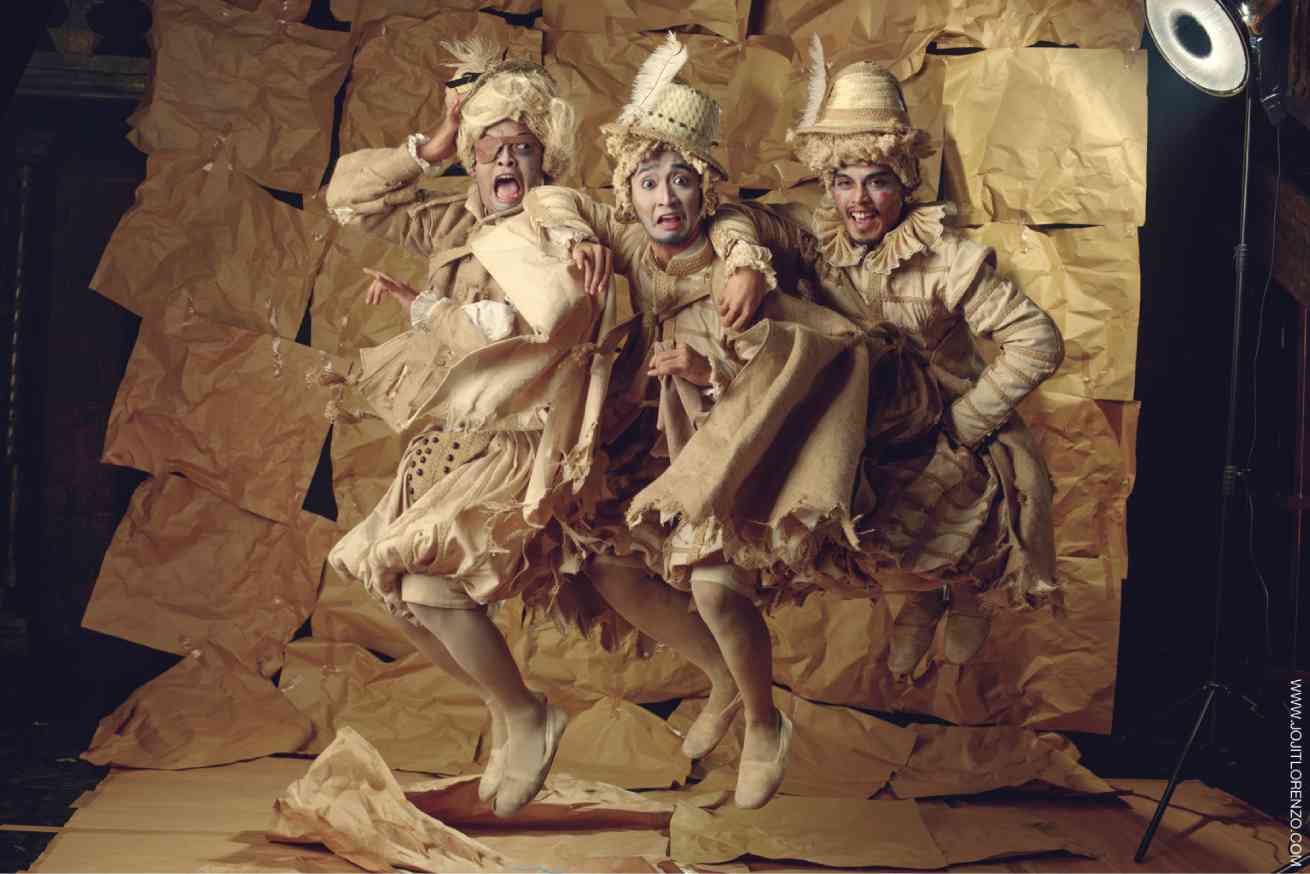 ESHEI Mesina, Giancarlo Patelo and Lehner Mendoza (as the lowlifes of Vienna) in doublets and trunk hoses of muslin and jute sack

What costume designer Gino Gonzales couldn’t do due to budget constraints, he more than made up for in terms of silhouettes and textures to produce neutral-colored Elizabethan-inspired costumes made of katsa (muslin), raffia, jute and sinamay for Dulaang UP’s staging of William Shakespeare’s “Measure for Measure.”

Set in the early 1600s, the play, in Gonzales’ words, has a “convoluted plot” with a huge cast of 40 characters.

His main challenge was how to make each character—from the two-faced Angelo to the flamboyant Mistress Overdone—look different using earth-toned costumes with collars and cuffs made of raffia and Elizabethan wigs fashioned from abaca, jute and the trusty glue gun.

And since director Alexander Cortez wanted to do English and Filipino versions, Gonzales had to do two sets of costumes and wigs to accommodate both casts, composed mostly of students from the University of the Philippines.

The budget given him to dress up both casts was just enough, he said, to pay for “one couture gown.” If a similar production were to be staged in New York, the costume designer would at     least get $1,000 per person.

“When a costume designer comes up short, he can’t use lack of budget as an excuse,” he said. “Critics don’t know and they don’t care.”

Costumes are an actor’s extension of his body, said Gonzales. His clothes and footwear dictate the way he moves and conducts himself on stage. Something as simple as a cape could expand possibilities in terms of movement and gesture.

“Because of the actor’s costume, there are times when the audience immediately gets an idea of what the new character is even before he says a word,” he added.

This time he needed at least P25,000 to dress up a character from head to toe. The communication arts graduate from Ateneo couldn’t even get half that amount. What finally convinced him to say yes to Cortez?

While doing his masters in set and costume design at the New York University sometime in the late ’90s, Gonzales had already done initial research on “Measure for Measure” as part of his schoolwork.

The school project included patterns and sketches of supposed costumes to be worn by the play’s principal characters. Since it was an assignment, he and his classmates had to do their respective versions of the play’s costumes.

“It wasn’t something I chose,” he said. “But since I’d already done the research and illustrations, the only thing missing was for me to do the execution.”

He’s also no stranger to productions with shoestring budgets. But, before committing to the Dulaang UP show, Gonzales set down a number of conditions.

Since budget was pared down to the bone, he knew that he would need enough manpower, including an assistant to do all the legwork, to realize his vision. Although the costumes were later sewn by a professional team who used to work for the late National Artist Salvador Bernal, preliminary preparations such as cutting, beadwork, braiding and wig-making were done by UP students for free.

“I dealt mostly with freshmen and sophomores,” said Gonzales. “At first it was difficult because none of them were professionals. So I had to conduct workshops in the beginning to demonstrate things I want them to do.”

Then there was also the question of materials. Based on his school project, Gonzales wanted to dress up his principal characters in yards and yards of expensive silk brocade.

Gonzales had to junk his original vision and come up with more realistic alternatives to make ends meet. That was when he hit upon the idea of using one of the cheapest fabrics there is —muslin.

To achieve shades and textures, he used three grades of muslin and combined them with such native and abundant materials as raffia, abaca, sinamay and jute (the same material used to make coffee bean sacks).

He also commissioned a Marikina shoemaker to do faux beige espadrilles down to the trademark braided abaca accent. Buying original Spanish-made pairs was out of the question.

“I did minimal dyeing on some fabrics, but everything is still in neutral colors,” he said. “We also used wooden beads and plenty of indigenous materials such as abaca to create shape and linear patterns.”

Gonzales even shunned the use of black, except on some characters who had to wear boots and gloves. By confining his palette to browns and creams, he also couldn’t use certain tried-and-tested shades and nuances to show how bad or good certain characters were.

“So I relied mainly on shapes and textures to differentiate each character,” he said. “In the case of Angelo, the play’s pretentious antagonist, I made him wear different wigs to suggest his duplicity.”

To preserve the play’s “literary integrity,” he chose to remain faithful to the wardrobe’s Elizabethan silhouettes.

There were times when Gonzales had to advance his own money to buy materials. Dulaang UP’s minuscule budget was also supplemented by private donors, including Irene Marcos-Araneta.

If there was one thing good about the development, Gonzales felt that his costumes were able to “bridge the chasm” of Filipinos performing roles clearly meant for Caucasians.

During test performances, for instance, members of the production, including Gonzales, were asked by Cortez to weigh in. He didn’t say much apart from discouraging certain actors from saying their lines with a British accent.

“I always have a problem with Pinoy actors aping British accents and acting like Europeans,” he said. “For one, I usually can’t understand what they’re saying. The effort shows. It’s better if Filipino performers would just embrace who they are.”

As a costume designer, his control over such areas as characterization is limited. But by using indigenous materials to fashion costumes with Western silhouettes, Gonzales hopes to “make it look real for Filipinos.”

“Even if the Filipino actor tries his best to be this foreign character, you could sometimes see his trepidation and limitations,” said Gonzales. “My point is, we shouldn’t hide it anymore. We should make the most out of the material by being who we are.”