‘We chased the cherry blossoms and discovered much more’ | Lifestyle.INQ ❮ ❯ 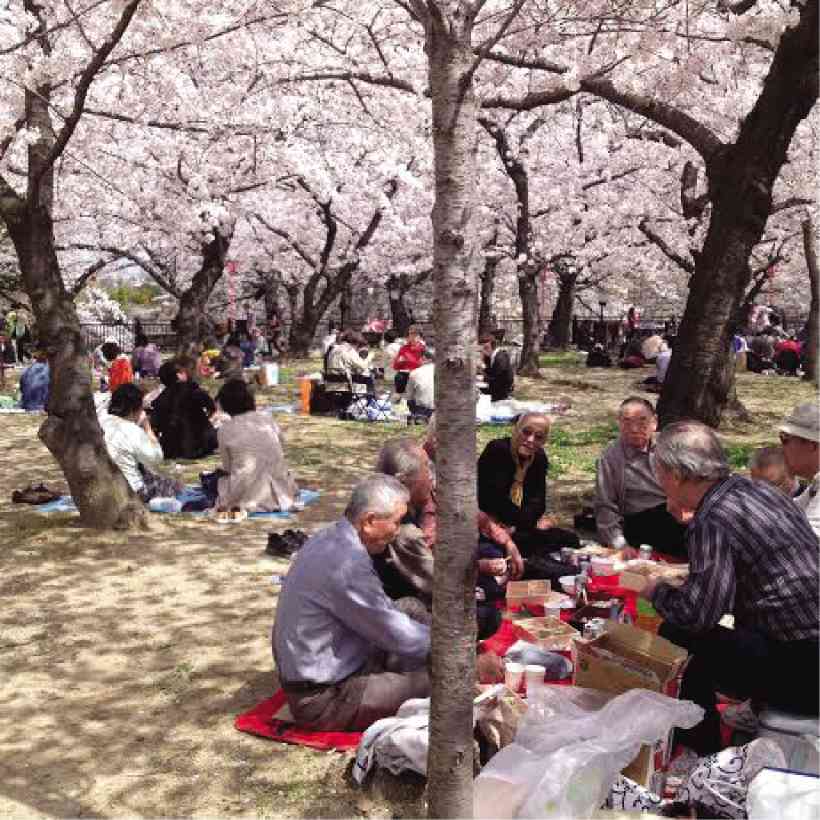 ‘We chased the cherry blossoms and discovered much more’

A plan to visit Japan suddenly came up one day and the universe conspired to make it happen.

Our group of six friends, headed to Osaka, were delighted to come in the midst of Sakura season. Sakura is the Japanese term for cherry blossoms, in bloom for only one or two weeks in a year.

We caught the cheerful mood of the season. At the Osaka Castle Park, there was an abundance of flowering cherry blossom trees. We walked around the castle grounds admiring the cherry trees with pink to white blooms.

On the grounds under the trees, groups of people laid out their picnic mats, enjoying lunch from bento boxes. They ate their food and drank sake (rice wine) and were in a jovial mood.

Later, we were to learn that “hanami” is a centuries-old practice of picnicking under a blooming sakura tree. The elite of the Imperial Court started this tradition during the Nara Period in 710-794.

Later it was practiced by the samurai society and through time by the common folk who coined this period as “hanami season.”

Sakura was said to be a motivating symbol for the Japanese people. According to accounts, during the Second World War, Japanese pilots painted them on the sides of their planes before embarking on suicide missions. The government encouraged the belief that the souls of the kamikaze pilots were reincarnated in the blossoms.

For the Japanese, sakura or cherry blossoms is a metaphor used for the fleeting nature of life. Life is considered brief and beautiful, similar to the cherry blossom.

The transitory nature of the blossoms, its beauty and quick death, has often been associated with mortality.

As the cherry blossoms are richly symbolic, it is found in Japanese art, manga, animation, film and music.

There are over 100 cherry tree varieties in Japan. While most varieties produce light pink to white blossoms, there are also cherry trees with dark pink, yellow or green blossoms.
The colors of some varieties may change while they are in bloom. Some bloom as white flowers and change to pink in  a few days.

In Kyoto, we chased the cherry blossoms along the Philosopher’s Path by the Ginkakuji Temple. On both sides of the canal, the trees beckoned to us, their branches swooping down gracefully above the water.

By the time we got to Nagoya, it was the tail end of Sakura season. The trees at the Nagoya Castle grounds were shedding their petals and fallen on the ground.

From Osaka, we flew north of Japan to Hokkaido over snow-covered mountains. We landed in Sapporo where the Winter Olympics were once held. We came at the end of winter and experienced the drop in temperature.

The little we knew about Sapporo was its beer, and, indeed, the city is home to Sapporo Brewery.

The Sapporo Beer Garden in the Genghis Khan Hall is a red brick building that was originally constructed during the Meiji era. One felt a sense of history upon setting foot inside. There was a large hall with wooden walls and a giant kessel from the Taisho period at the center that reached up to the ceiling.

The tables were equipped with roasters and one could cook lamb while trying different kinds of beer.

The mood was joyful; families, friends, company groups and salaried men and women occupied the tables around us. Coming here was one way of immersion in Japanese culture.

We saw varieties of exotic seafood at the Chyuou Irshiuri Market. A line of stalls displayed the freshest catch from the sea. We bought some and had a kitchen prepare our lunch. We had our fill of uniroe of the sea urchin and ikura salmon eggs, and tasted the sweetest crabs.

There are many markets of similar nature around Japan where locals go to have a seafood meal.

From Sapporo, we took the local train to Otaru passing through small villages along areas covered with snow. Otaru is a city and port that faces the Ishikari Bay. The terrain consists of steep slopes with the altitude dropping sharply from the mountains to the sea. The area between has been developed and is now called “Hill Town.”

Otaru is a quaint town with low-rise buildings, small restaurants and museum shops. The Otaru canal runs through the town and reflects the stone and brick warehouses, the heritage of the past. Here they make sake, beer and whiskey, and have a thriving glass industry.

It was pleasant walking along the canal and through town. The temperature dropped to zero in the evenings but it did not stop us from getting acquainted with the place.

A visit to an onsen was perfect for beating the cold. Onsen is a term for hot springs in Japanese. Onsens are traditional public bathing places with indoor and outdoor baths. Its waters are believed to have healing powers from the minerals of geothermally heated springs.

A visit to the onsen was considered an outing for families and friends—bonding time.

Upon arrival at the onsen, we were told to leave our shoes at the entrance; then we were ushered to the ladies area. Clothes were left in lockers and with just towels on hand, we proceeded to the washing area. There were cubicles where each one bathed before going into the pools.

We tried several indoor pools but enjoyed the outdoor pool the most, with the contrast of the heat in the water and cold out of it. It was an effective remedy for soothing tired muscles and led to a good night’s sleep.

The highlight of our stay in Japan were the two meals daily organized by our team leader, chef and restaurateur Conrad Calalang. He mapped out restaurants in each city we visited, keeping us happy most of the time.

We tried different cuts and grades of Japanese beef and lamb, and had seafood that tasted like it came straight from the sea.

Travel in Japan is relatively easy, with efficient train service.  One feels that, compared to the Philippines, there is a lot of space and less people in Japan. No traffic and no crowds.

We were impressed with the Japanese culture in general—their courtesy, discipline and order standing out.

We saw many old people and very few pregnant women, signs that Japan has one the lowest birth rates in the world. The government is taking measures to reverse the shrinking population. They are encouraging women to have more children.

One of the benefits of travel is seeing a different reality. It provides the opportunity for stepping out of our own environment. It makes for a clearer understanding of the world. We chased the cherry blossoms and discovered and learned much more.