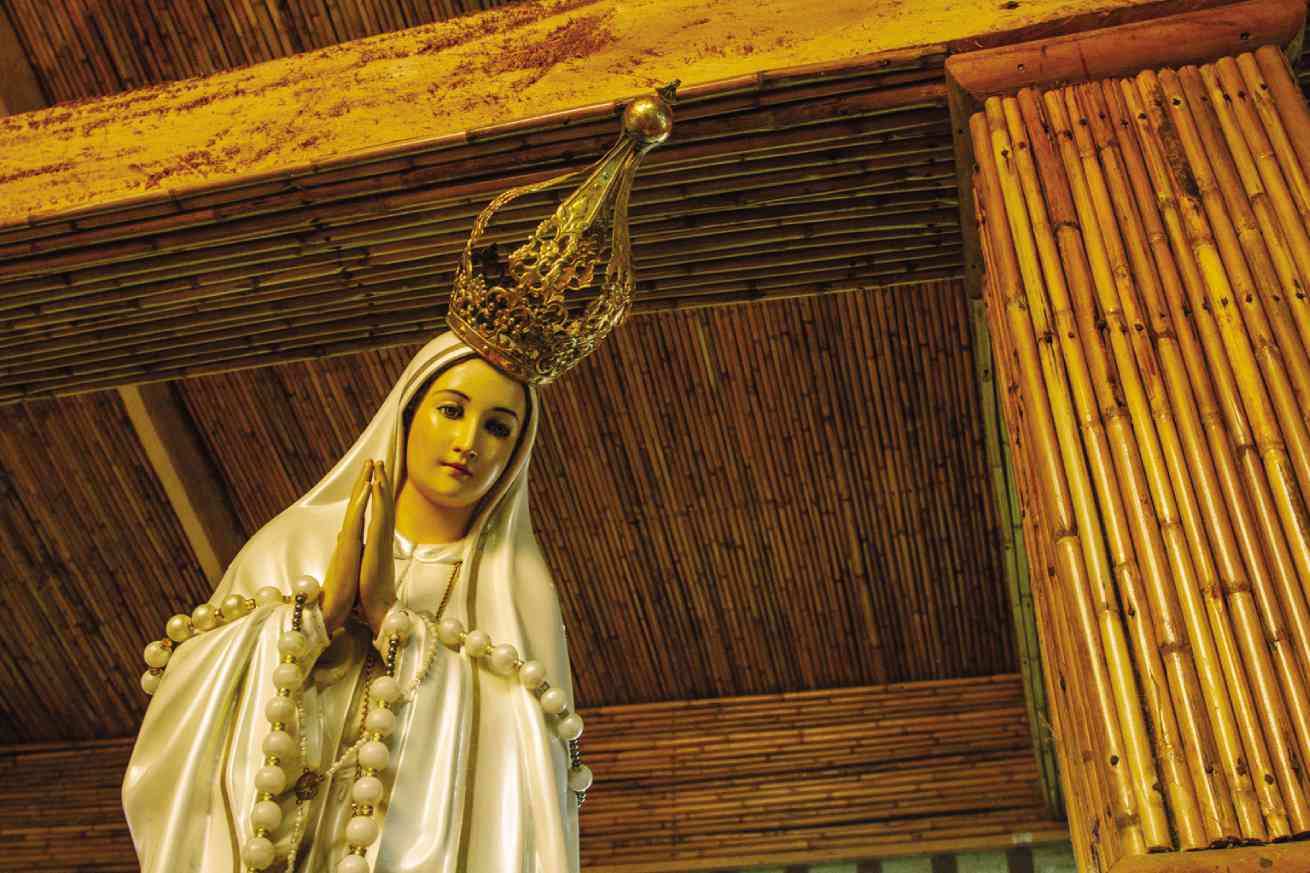 OUR LADY of Fatima’s facial expression changes at every angle. The posts and ceilings are covered with runo. JOJO MAMANGUN

Without  fanfare, the Ave Maria Grotto on the mountains of Catigan has been attracting pilgrims. Gil himself had been coming to the Philippines since the ’90s, hunting for miracles, as they say.

It is claimed that one day, the Our Lady of Guadalupe appeared to him on that site. She said, he claimed, that  the Philippines was special because Filipinos turned to God instead of to bloodshed. Their deep faith would be their protection.

Back then, there were rumors that a tsunami would hit the Davao Gulf. An earthquake in the Indian Ocean, said to be the deadliest in history, generated a series of tsunamis in Thailand and Phuket that resulted in a death toll of 227,898. The Philippines was spared.

The shrine of Our Lady of Catigan at the Ave Maria Grotto stands out like a jewel in a forest that’s home to fruit trees, hardwoods, foliage and tropical flowers. There is a deep silence that seems to swallow up the cries of the birds.

The sanctuary is known for inexplicable sightings. Old ladies in white are said to come every Saturday at sunset, with devotees feeling as if they are communing with angels. Some see gold dust falling from the sky, or light emanating from Our Lady’s face.
Others claim to have been miraculously healed of cancer, stroke or blindness.

“People don’t talk and we like to keep quiet,” says Sonja Rodriguez, the  founder of the Ave Maria Grotto and the lodging Casa Maria.
At 73, she can still  clamber up the steep mountain trails with the help of  a walking stick.

Rodriguez comes from one of Davao’s most prominent families. Her father, Antonio Habana, was a lawyer and political kingmaker, and one of the founders of Davao City. Her mother, Esperanza Acuña Arnaldo, was a cousin of President Manuel Roxas.

Rodriguez runs the Habana compound, a heritage house in Davao.

Upon the prodding of Reyes, she auditioned for the Philippine Festival, a family-oriented variety show at the Dunes hotel in Las Vegas. After becoming a  member of Actors Equity, she performed in such musicals as “South Pacific,” “Flower Drum Song,” “The World of Suzie Wong,” and “King and I.”

At 21, she met and married Filipino businessman Jack Rodriguez in Vegas. They moved to Hollywood where she became a member of the Screen Actors Guild. Sonja was a double for Swedish-American Ann Margret in an Elvis Presley starrer, “Gambit,” and played bit parts in  movies.

She joined her husband in his postings in Thailand and Spain. Although they had a comfortable life in a villa in Costa del Sol, Malaga, Spain, Rodriguez felt a void in her life.

“I was raised in a Catholic school, yet I asked if there was more to it than just going to church,” she says.

Rodriguez would come home to the Philippines to visit her parents in Davao and her sister in Metro Manila. Searching for answers to her spiritual questions, she attended a retreat in Banal na Pag-aaral (Holy Teachings) in Quezon City in 1975.

When the female shaman, Salve, would go into trance, it was said people would have mystical encounters. Sonja was among them.

“I saw a peaceful Christ. His face was full of compassion and love. He told us to pray from our hearts. He had forgiven all our sins and wanted us to change,” recalls Rodriguez.

Christ’s vision  touched her soul. He told her that she had a mission to return to Davao, the promised land, and advised her to be close to the Blessed Mother.

Meanwhile, her husband had resettled in the Philippines to head a company. For three years, Rodriguez would wake  up every  morning at three to pray the rosary with her arms outstretched.

On Oct. 23, 1977, while praying the rosary in church, she heard a voice in the Tabernacle.

“I saw Catigan, and Jesus told me build a grotto there for our Mother that will heal people not only in body but in spirit.”

Rodriguez used the family property in the hinterlands to build the grotto. The 23-hectare site was a logging area and a stony one. Since there were no roads, materials were hauled by carabao.
She commissioned a local artist to sculpt the image of Mother Mary, Our Lady of Catigan. She told him that Mother Mary would guide him in shaping her image and that he would be rewarded with the smell of incense.

After completing the image within six months, the artist said he never smelled the incense. Upon closer look, Rodriguez  discovered that Mary’s image was not completely representational.

After the artist made the image more lifelike, he finally  smelled the fragrance of spirituality. This experience was unusual because the tropical flowers around the grotto didn’t produce any scent.

Back in Manila, Rodriguez deepened her involvement in religious activities.

In 1985, while transporting the image of the Blessed Mother of Zambales to various places, she met an ailing President Marcos in the Baguio house. Rodriguez lent him the image for a few days and gave him a rosary that had been blessed by the Pope.

In 1997, Sonja decided to expand the estate with the construction of Casa Maria, House of Mary, to provide accommodation and religious services to pilgrims. The 25-room lodge used materials from the surrounding forest such as stone and hardwood.

Without  publicity, pilgrims began coming—including men who claimed to be with the New People’s Army and who wanted to dismantle the image. But one of them said: “If we remove her, then we would have lost our Mother.” Another said: “She’s there to remind us that we have a valuable life.”

Rodriguez doesn’t keep records of the numbers of arrivals and doesn’t charge any fees. Still, Ave Maria Grotto has attracted international visionaries such as Vassula Ryden.

“I developed this myself with no help from anyone,” says Rodriguez.

Tomorrow, she is celebrating Mary’s birthday with a  Mass and a feast.

Although she has the means  to put up this pilgrim village, Rodriguez points out that wealth isn’t an end in itself.

“People who are well-to-do will not undertake what I’m doing unless they are inspired by the Lord. I don’t think about the money I’ve spent. This place, for me, is the legacy that I will leave to the world.  My  children ask,  ‘Why don’t you travel instead?’ But I’ve been around.” Among her sons is restaurateur Archie Rodriguez.
“I tell them that if something goes wrong, you have a fallback. This place will protect you because I gave something to the world. This will be your Shangri-La.”