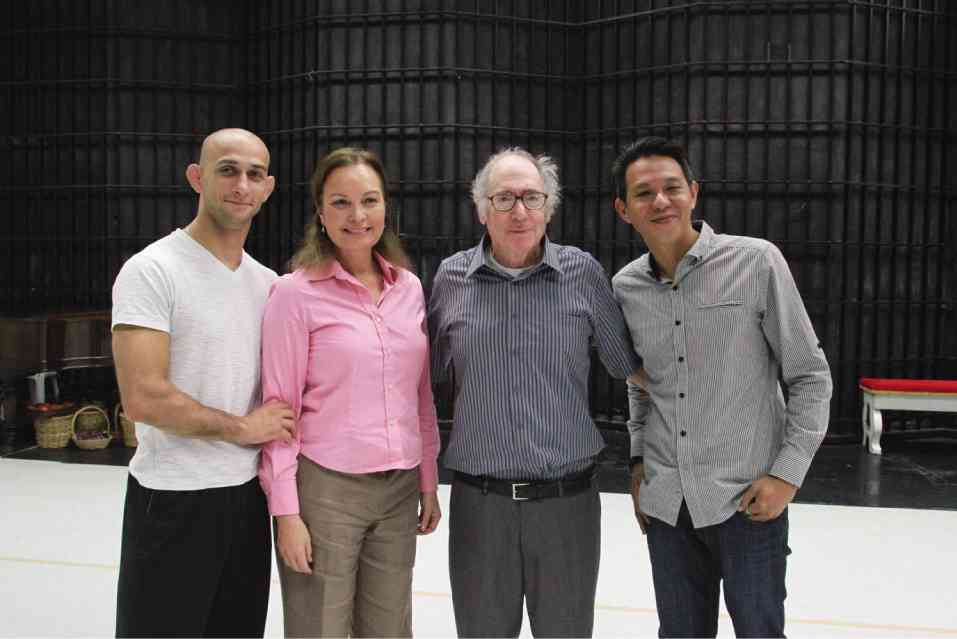 For its 45th anniversary,  Ballet Philippines (BP) will hold the “Blue Moon Gala” this September. The company held an informal program at their studio that featured the works of  international choreographer George Birkadze  and  Project Philippines, a cultural exchange program in which the American artists will hold free classes and workshops.

Birkadze’s  neoclassic pas de deux “R & J,” a reimagination of “Romeo and Juliet,” and “Farandole,” an ensemble dancing loaded with pyrotechnics, will be performed on Sept. 25 and 27 at the Cultural Center of the Philippines (CCP).

Norman Turner, a dedicated balletomane and retired engineer from Boston, used to take videos of dance companies in America.  Watching Birkdaze’s works  for the Festival Ballet of Providence in Rhode Island,  Turner arranged his  choreography to be restaged at Harvard. He knew that Birkadze was on the rise.

“Many people think they’re choreographers, but they’re not. George is unique,” said Turer. “I like to send him to places where they don’t have good choreographers.”

While vacationing in the Philippines (Turner is married to a Filipino woman), he watched the local dance companies on the Youtube and was not impressed. He wrote to the  different companies offering suggestions. Fortunately, BP artistic director Paul Morales showed interest. Turner funded Birkadze’s first trip so he could look at the company.

On his return to stage his works, Birkadze paid for his airfare and offered his services for free while Turner sponsored his accommodations.

As a secret patron of the arts, Turner was modest. “It’s not about me, it’s about other people.”

Birkadze immediately felt a connection with the Philippines. It reminded him of his country, Georgia, which lies between Europe and Asia. Both are emerging economies with troubled politics, and the people are warm and sincere.

He said “R & J” and “Farandole” are his gifts to the Philippines. “When Norman paid for my trip the first time,” said Birkdaze. “I understood what he meant. I’m not coming here to make money. I love the guys (BP dancers) and they love me. I can’t make them pay.”

“R & J” condensed the impetuous love scenes and the deaths at the crypt in seven minutes.  Instead of the Prokofiev’s signature music, Birkdaze chose Alexander Shostakovich’s ‘Symphony No. 5’ which was emotional yet elegiac.

“Nobody would use Shostakovich for this piece with all that cacophony,” said Birkdaze. Still, he produced a character-driven  pas de deux that used a lot of lilting upper bodies,  expressive arms and intimate partnering maneuvers.

“It’s  very simple, but if you put in all the emotions, it has  more impact,” said Birkadze.

He lauded the couples, Katherine Trofeo and Earl John Arisola, and Denise Parungao and Richardson  Yadao for their expansive dancing and for wringing a truthful performance out of the melodrama.

“Farandole” was a contrast to the tenderness of “R & J.”  Based on the “Farandole,” in Suite No. 2 of the George Bizet’s opera “Carmen,”  the choreography  was inspired by the folk dance in Provence and Catalonia.

He cited the Spanish influences such as the revoltade (a big turning leap that ends with a leg whiplash); saut de basque (a turning jump with a bent leg); pas de basque (a three-beat step); and jota (a quick dance).

“These guys are technically unbelievable. I added double flips, double fish dives [a partnering step], a lot of pirouettes and jumps.  There is no principal dancer, but just one guy who is dancing alone for a few bars. It’s good to challenge the dancers. They feel appreciated,” he said.

One of tricks was tossing and twirling a ballerina in mid-air before her partner catches her.

Meanwhile, dancers from Project Philippines shared the fruits of their experience in the Philippines.

Chelsea Ainsworth, Tyner Dumortier and Allison Gibbons performed a piece that consolidated a movement vocabulary that came from the students of Catarman National High School in Leyte.

The Americans taught technique classes and used modern dance as a means for their self-expression and for building social skills. In one of the classes, students were asked to interpret the words “trust,” “community” and “focus” through movement.

The volunteer musicians taught body percussion and how to make their own movements.

Gibbons learned about Project Philippines through its partner organization, Artists Striving to End Poverty, an American organization which gives children from poor communities the chance to experience art through its volunteer artists.

These artists raise funds for their trip online and also from personal donations. The Philippine consulate in New York also engages the Filipino community to contribute to Project Philippines.

Ultimately they aim to teach the senior dance students technical skills so that they could become teachers themselves and pass on the skills to other students.

“With young students,” Durmortier said, “you  help them become artists and give them the appreciation and the attention that  they don’t have in their daily life. We push them and show the light that they can  express themselves this way.

“It’s my first time in the Philippines; I’ve seen how the  students have such passion, raw talent and respect  for what they do. They are hungry for more. They take in everything  that you give them  and they fly with it. Seeing the smiles on their faces and how they help each other is how they are giving back to us.”

Julliard graduate Ainsworth agreed: “We have a responsibility to teach our art to others or give our art in another way. It’s not just using it for  ourselves but moving it outside of our own bodies to the community.”