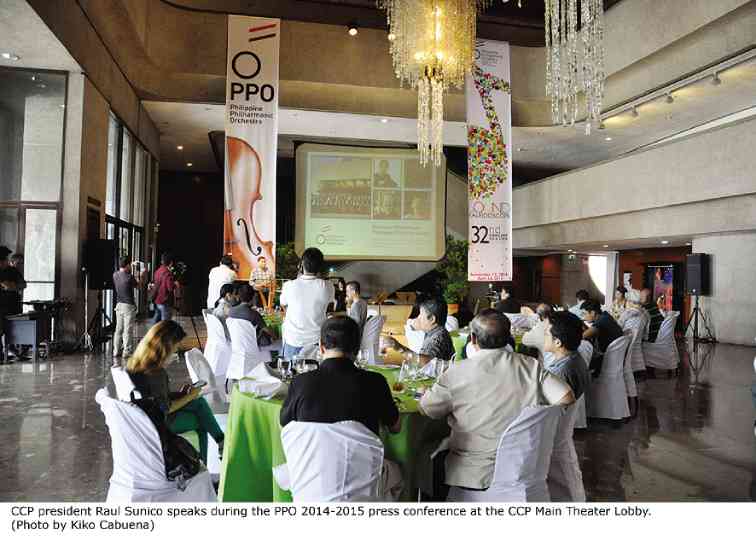 Why are young people today turned off by classical music?

“There are a couple of reasons,” Ochanine said. “And these have a lot to do with technology. This is the essence of the problem. There is a lot going on which keeps them excited. With this kind of music they don’t have to think much.”

He added: “It’s very difficult for someone who hasn’t had that kind of experience (of being oriented to classic music). Some of the songs I hear today have very little to say. That’s why we are pushing classical music. We have the civic responsibility as musicians to expand the consciousness of audiences.”

The 32nd (2014-2015) concert season of the PPO titled “Sound Kaleidoscope” opens at the Tanghalang Nicanor Abelardo of the CCP on Sept. 12, with Ochanine conducting the PPO and Singapore-based pianist Albert Tiu as soloist.

With the aid of a video screen, Ochanine conducted (pun not intended) a lively running commentary on the eight concerts of the season.

On Oct. 17, Hermenigildo Ranera takes over as conductor and the spotlight falls on trumpeteer Rommel Reyes. The compositions to be played are Gershwin’s Cuban Overture, Teleman’s Trumpet Concerto, and Borodin’s Symphony No. 2.

On Nov. 14, the PPO and the four soloists will interpret Mozart’s Sinfonia Concertante, Haydn’s Symphony No. 97, and Bartok’s Concerto for Orchestra.

On Jan. 23, 2015, with the CCP being a venue for the blockbuster Broadway musical “Beauty and the Beast,” the PPO moves to Meralco Theater in Pasig City, with another acclaimed pianist Rowena Arrieta tackling Liszt’s “Totentanz.”

Said Ochanine: “I’m looking forward to working with Rowena,” who is known for the “demonic intensity” of her work. This was amply proven by the film clip which showed Arrieta sweeping through a difficult piano concerto with a symphony orchestra abroad.

The concert season returns to the CCP on Feb. 13. Cellist Pei-Sian Ng takes center stage in concert No. 6 on Feb.13, playing Dvorak’s Cello Concerto. The PPO will also perform Sibelius’ “Swan of Tuonela and Lemmenkainen’s Return” and Haydn’s Symphony No. 45 (“Farewell”).

Another balikbayan (returning) conductor is Yoshikazu Fukumura of Japan, who will lead the symphony orchestra in performing Rossini’s Overture to “Semiramide,” Haydn’s Symphony No. 82 (“The Bear”) and Ravel’s “Ma Mere l’Oye.” This will be on March 20.

Noting that “Mindanao Sketches” (by National Artist Antonino Buenaventura) was part of the concluding repertoire, Ochanine said that “PPO being a national orchestra, we have the responsibility to keep Philippine music alive.”