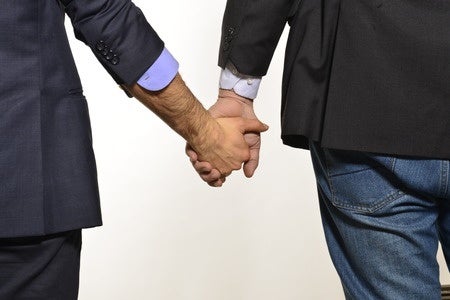 BEIJING — Britain’s consul-general in Shanghai married his same-sex partner at the ambassador’s residence in Beijing at the weekend, sparking debate over gay unions in the country.

Brian Davidson wed his American partner Scott Chang on Saturday, according to posts on a verified microblog account, under new rules allowing UK nationals in same-sex relationships to marry in British consulates in 24 countries around the world.

Ambassador Sebastian Wood posted a picture of himself standing between the newly-wed couple, who were dressed in suits and bow ties.

Wood smiled as he held a red card reading “keep calm and carry on.”

“Today I am very happy and proud to host the same-sex marriage of Brian Davidson at my residence. I wish them happiness forever,” Wood wrote on Sina Weibo, a Chinese equivalent of Twitter.

A spokesman for Britain’s embassy in Beijing confirmed to AFP that the wedding had taken place, but said that the couple viewed it as a “private matter.”

The ceremony provoked mixed reactions in China, where gay relationships are not illegal, but homosexual partners face widespread stigma and same-sex unions are not officially recognized.

“That country is clearly sick. It’s like the last days of Rome,” one person wrote in an online comment.

“I respect foreign gay culture. But it’s not Chinese culture. Please respect that,” wrote another.

Attitudes to homosexuality in larger Chinese cities have become more open in recent years, and many celebrated the marriage, which was held on a grassy lawn on a sunny autumn day.

Gay marriage around the world

Catholic Church has no problem with marriage between gay man, lesbian