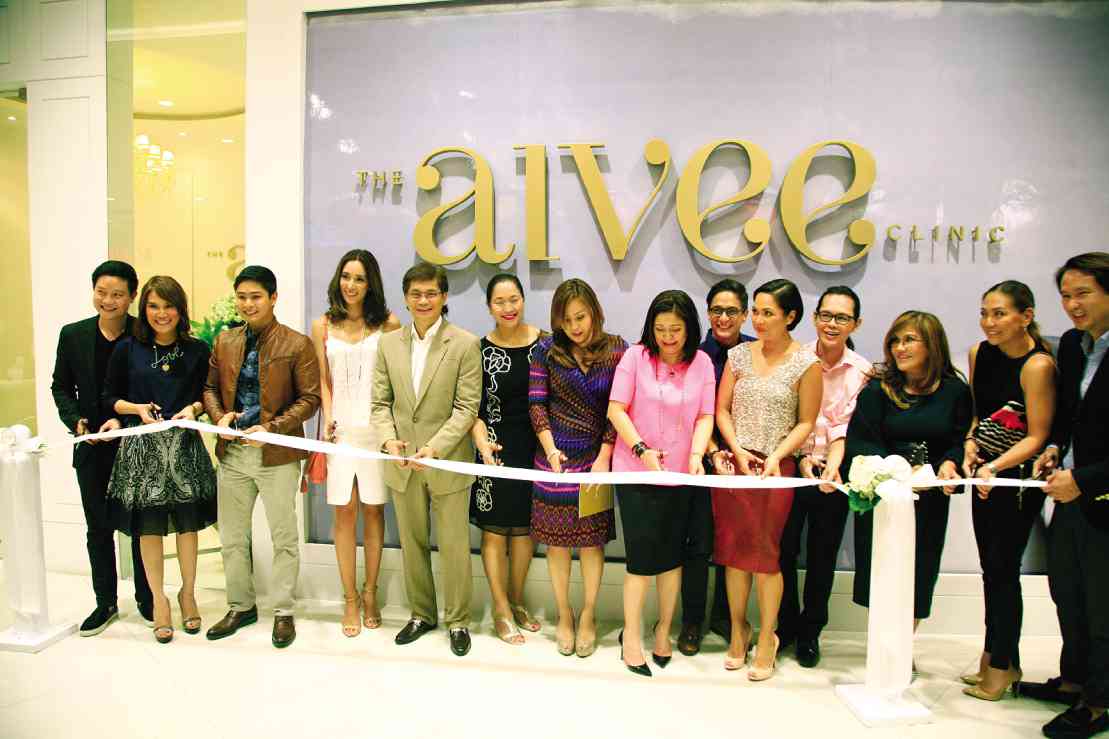 The husband-and-wife team of Doctors Z and Aivee Teo have just inaugurated their first mall-based beauty clinic in the Philippines inspired by a modern French boudoir.

On the fifth level of SM Megamall’s Mega Fashion Hall, the Aivee Clinic is the couple’s third non-hospital-based treatment center in Metro Manila.

“This clinic is designed for noninvasive treatments like lasers, hair removal and Botox in the convenience of a mall setting, but without sacrificing the ‘Aivee’ experience,” said Aivee.

Z, the company’s CEO, has a practice in his native Singapore, where he runs two beauty clinics. The couple and their three young children shuttle regularly between Singapore and the Philippines.

Both the Teos’ flagship clinic at Bonifacio Global City (BGC) and the Aivee Clinic bear French-inspired design. (A third clinic devoted to lunchtime procedures is at Bellevue Hotel in Alabang.)

“We have been open for two months now. Our patients who live in the north are very happy. They don’t have to travel far to avail themselves of our services,” said Aivee.

But while the bigger clinic at BGC channels “old French” elements, said Aivee, the 160-square-meter clinic at Megamall has a modern French feel—from the customized wall-to-wall carpets to the sliding and mirrored French doors that divide several treatment rooms.

Apart from spacious and chandeliered reception and waiting areas, the Megamall clinic has seven private rooms and one consultation room. Thanks to a series of sliding French doors, three adjacent rooms can be turned into one big room.

“The setup is ideal for people who come here in groups,” said Aivee. “We also have a treatment room with two beds, which is perfect for couples.”

The Teos are also proud that no two rooms have the same carpets. With either flowers or burst of colors as underlying theme, the carpet’s computer-designed patterns and color scheme dictate the mood of each room.

“We didn’t want a tight hallway because we would be pulling a lot of machines around,” said Aivee. “We don’t want our patients to be moving from one room to another.”

When she and the hubby sat down with Singapore-based Avid Interior Group led by Malcolm Chua, their vision was clear: to bring a more global feel to their thriving brand.

“We also commissioned Charles Allan and Associates, a Singapore-based graphic and design company, for the signages,” said Z. “We collaborated with these people because we wanted to stretch the imagination a little bit more. As a result, each room in this clinic has its own theme.”

Being global travelers themselves, the couple also had to consider design elements and amenities that would appeal to their well-traveled patients.

“A lot of times, when you enter a beauty clinic here, it still looks like a typical clinic with white walls and Zen interiors,” said Aivee. “We want to give our patients a break from that bland, antiseptic look.”

Instead of smooth white walls, the couple opted for warm, textured beige walls. They also took their patients’ comfort into consideration.

In lieu of ordinary bedding, they chose the finest duvets and the softest bed sheets with a 300 thread count.

Each room has a dimmer to allow patients to relax and even sleep while undergoing a procedure.

The Aivee touch extends to custom-made door handles shaped like the letter “A.” Even the pillows are embroidered with Aivee’s maiden initials, “A A.”

“And like our other non-hospital-based clinics, all of our noninvasive machines and treatments are available here,” said Aivee. “There’s no point in putting up a new branch only to tell the patient to go to an older branch because we don’t have the machine here.”