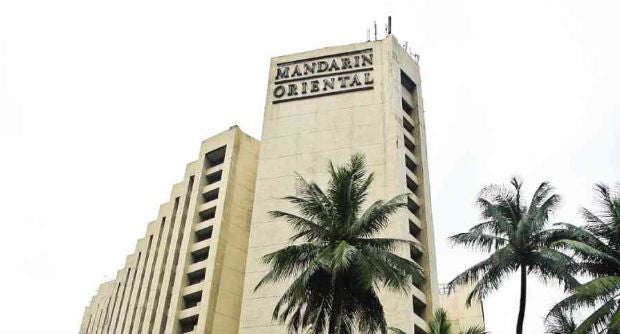 END OF AN ERA After 38 years, the Mandarin Oriental Manila closed its doors on Tuesday. INQUIRER FILE PHOTO

Some 400 staff and employees of the hotel gathered around their general manager to hear his farewell speech. That afternoon, MOM closed its doors after 38 years, shortly after the last guest checked out at 1:30 p.m.

“I don’t know what to say at a moment like this, guys, other than a huge thank you for everything,” Van Dullemen told his staff.

“When you walk out that door, hold your head up high,” he added.

Rene Ottlik, the hotel’s executive chef for eight years, was among the many who couldn’t hold back the tears. He quickly wiped his eyes and let out an embarrassed laugh as photographers pointed their cameras at him.

Earlier, the F&B team led by Ottlik hosted the farewell lunch for the employees at Paseo Uno, the hotel’s popular buffet outlet. They feasted on a vast spread typical of the restaurant, consisting of fresh oysters, green salads, assorted cheeses, chicken adobo, pancit, black paella and kakanin, among others.

While many of their coemployees partook of the meal in their offday clothes, the Paseo Uno staff served from behind the buffet counters in their chef whites. It was the last meal they were serving and they were happy to do it, said Noridy Abaring, an employee for 13 years.

While some cried unabashedly, others tried to put up a brave front—a playful jab at a co-worker’s shoulder here, a high-five and a firm handshake there—many were heard promising to keep in touch on Facebook. As they took their ceremonial exit, the staff broke into a chorus of the Basil Valdez classic, “Ala-ala.”

At lunch, Remy Vergara, Uchie Obenia and Chato Rivares were huddled at a table as they watched a slideshow of old hotel photos on a TV screen. The women worked for the housekeeping department, each for over two decades, and easily identified the photos of GMs past.

Rivares earlier went around the restaurant taking coemployees’ photos with her tablet. “It doesn’t matter that I don’t have a photo as long as I can take (shots of) my co-workers,” she said in Filipino. “I’ll put them on Facebook.”

The three said they had all found jobs at a Makati salon owned by a frequent hotel guest. “I’m just sad for those who haven’t found a place to move to,” Rivares said. “I’m in a better place because my only child has graduated from college and is already working. Otherwise, it would be hard because I’m overage and ‘underheight.’”

‘At a loss for words’

At the receiving line during the ceremonial exit, Van Dullemen hugged his departing staff goodbye and was heard asking where they were moving, or if they had found a new job.

“I’m at a loss for words,” he told this writer. “I’m just glad it’s ending this way. It’s very emotional.”

The MOM will reopen in 2020 in a new location, at the tip of Ayala Triangle Gardens nearby after the hotel management signed a partnership agreement with Ayala Land Hotels and Resorts in June.

“I didn’t know that I’d come back to see it close,” said Barbara Reyes, HR director, wiping away tears. Reyes was employee No. 4 when MOM opened in 1976, left, and returned in 2010. She had met her future husband, also an employee, at the hotel.

Of the pioneer MOM employees, 30 stayed on for 38 years, according to Reyes.

Charisse Chuidian, director for PR and communications for over two decades, joined Van Dullemen, Ottlik, Reyes and the senior executives in handing out mementos to the staff.

Even if there was only one guest left, many continued to discharge their duties. There was Louise Lindres, front office manager and employee for 12 years. “I’m trying hard not to be emotional,” she said with a laugh, as her staff attended to the last guest.

Frank Schuengel, a German expat living in Makati, checked in at one of the suites the night before with his girlfriend to mark their recent birthdays. “I thought if I could be the last person to check out, that would be something,” he said, before handing over his key at 1:30 p.m.