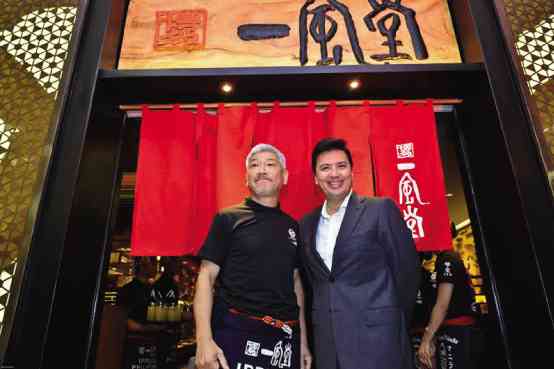 In March, Inquirer Lifestyle asked 100 people which ramen restaurant they would like to see in the Philippines. Ippudo topped that survey and, on Wednesday, it finally happened. Japan’s world-famous ramen house just opened at SM Megamall’s Fashion Hall.

Ippudo, which opened its first store in Fukuoka in 1985, has become a huge success not just in Japan, where it has 80 branches, but also the rest of the world.

Many have proclaimed it to be “hands down, the best ramen” they’ve tried.

Ippudo founder Shigemi Kawahara, who was in Manila last week for the launch, is happy to bring his ramen to the Philippines.

In our exclusive interview, he said: “I’ve always known that the Philippines is a country of smiles. It fits our policy… we like our customers to feel happy, to feel appreciation. It’s aligned with our ways of working. We’re happy that we’re able to bring that through our ramen.”

We asked Kawahara why he thinks people line up for his ramen. He said, “Because it’s delicious. We train our staff that every single bowl of ramen has to have a smile and maybe our customers can feel that. It’s very easy to serve a good bowl of ramen. Delicious ramen is everywhere, but what’s important to us is the quality, the service and the cleanliness.”

Long before he started making ramen, Kawahara was already in the food business. He opened After The Rain, a restaurant bar, in Fukuoka in 1979.

He enjoyed meeting customers, talking to them and cooking for them.

“There was a little bit of drinking so the ambience was quite friendly, people were happy. I wanted to create that ambience without alcohol, and so I thought of ramen.”

The first Ippudo was just a 10-seater. (The one in Manila can accommodate 79.)

“I had a vision to spread Ippudo. I wanted to have an influence,” said Kawahara.

Back then, ramen didn’t have a very good reputation. “Thirty years ago, when you say ramen, it wasn’t so clean, it was kind of cheap… The image wasn’t very good. Girls would not even consider having a bowl of ramen outside. I wanted to bring up the standard of ramen. I wanted the ladies, the young people to enjoy ramen.”

And that’s exactly what he did. “The reason many young people in Japan are eating ramen again is because I planted the seeds,” he said.

For Kawahara, ramen is more than just food.

“Everybody’s energy comes from everybody’s smile and from the word arigato (thank you). We want to make everybody smile. We also want the staff to smile, too. That synergy creates force, and the bigger the force, the world becomes a better place. Even from one bowl of ramen, the world can become a better place. And that is why I make ramen.”

Kawahara was named Ramen King in 2005 and has secured a place in the Ramen Hall of Fame after winning TV Champion Ramen Chef three times in a row.

Kawahara partnered with Standard Hospitality Group (SHG) in bringing Ippudo to the country.

John Concepcion, SHG founder and the man behind Yabu: House of Katsu, had his first taste of Ippudo’s ramen in Singapore two years ago.

“It was my wife’s birthday and she told me I was a cheap date because I was bringing her to a ramen place. But I said to her, this is a different ramen, this is the best in the world. ”

“It was, to my mind, without a doubt the best ramen I’ve tried in the world. We were just blown away by the quality.  Then we discovered the pork buns. The ambience, the service… Right then and there, I said, this is the standard of putting up a nice restaurant. I said to myself, ‘One day, I’d like to work with this guy. Because everything I want to do with a restaurant, they have it.”

Concepcion was so inspired by his first meal at Ippudo that it became his peg for putting up Yabu.

“Yabu was patterned after Ippudo in many ways,” he said.

Interestingly, he feels that Yabu is the reason Kawahara chose to work with him in bringing Ippudo here.

In the two years that Kawahara and Concepcion were working on opening Ippudo, a lot of ramen places opened here. We asked if that became a cause of concern.

Concepcion said, “I liked it because they basically taught Filipinos how to eat ramen; they made it a staple. In many ways, they paved the way. And I think there’s always room for another good brand.”

At a private tasting event last week, Ippudo was already getting rave reviews. We overheard diners at one table say, “This is for the more discriminating.”

Diners can choose the hardness of the noodles and customize their ramen by adding soft-boiled egg, seaweed and pork belly.

And if you have enough soup left in your bowl, you can also order extra noodles.

The ramen may be the star, but when dining at Ippudo, do not skip the other dishes. The Ippudo Pork Buns (steamed buns with braised pork belly and Ippudo’s original sauce) are a huge hit (they have chicken buns, too).

The Ippudo Hakata-style Gyoza is excellent. These pan-fried dumplings are plump, juicy and perfectly flavored. If you want your gyoza with a kick of radish, spring onions and ponzu sauce, go for the Oroshi Ponzu Gyoza.

Another must-try is the Curry Cheese Harumaki (deep-fried spring rolls stuffed with curry, minced pork and cheese). According to Kawahara, this is also a favorite around the world.

We asked him to recommend other dishes for first-timers to try. “The Bakuretsu Tofu and the Unagi Rice are also very popular. We sell many of these around the world,” he said.

We’ve been big fans of Ippudo for a few years now, lining up in New York for the ramen. We’re happy to report that our first taste of Ippudo Philippines has been just as delightful.

We usually have a hard time finishing a bowl of ramen but not when it’s from Ippudo. And it’s been days and we still can’t stop thinking about that gyoza. We can’t wait to go back—and not just because of the food.

The wait staff was very attentive and we loved the thoughtful touches such as the baskets under the seats that will keep your bags and belongings safe while you enjoy your food.

We thought Ippudo’s prices would be higher than those of the other ramen restaurants in the country.