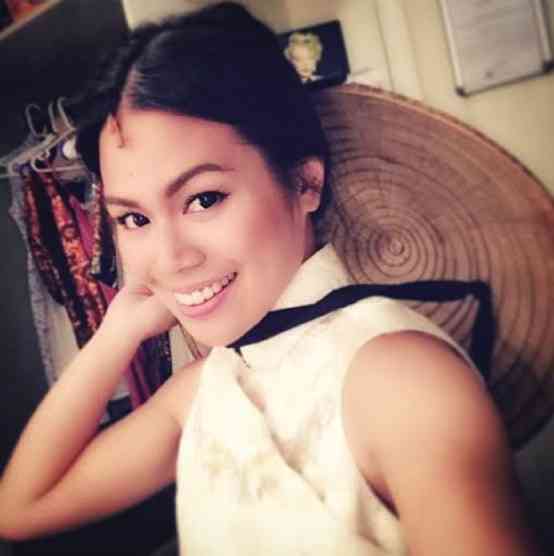 TANYAManalang on the “Miss Saigon” score: “I can sing the songs inmy sleep—they become likemusclememory.”

When Cyndi Lauper recorded “Girls Just Want to Have Fun” in 1983, she wasn’t just being flippant; what she really meant was that women could have the freedom to do what they want in life.

For the past few months, musical theater artist Tanya Manalang has been having fun playing a not-so-typical role as “the other Kim”—alternating with lead star Eva Noblezada in the 2014 West End revival production of “Miss Saigon.”

Joining the international cast was a goal she had aimed for, but it was an opportunity not everyone could grab.

It took almost a year of auditions, being called back and waiting for the producers’ nod. In fact, just before she was cast, the producers asked her if she was willing to take a scholarship to the Arts Educational Schools in London for a three-month drama course in preparation for a crack at playing Kim.

She took the scholarship and wound up being chosen over another aspirant. Now she alternates as Kim two times a week at the Prince Edward Theatre.

Tanya, who lives near the theater in a flat she shares with fellow cast member Rachelle Ann Go (as bar girl Gigi), says she loves London for two things: “The transport system is so efficient, and the quality of the produce—everything is fresh!”

It’s good that she learned how to cook while growing up as an only child of Mark and Christine Manalang, the couple who run the stage production outfit Ultimate Entertainment.

But while Tanya enjoys her time offstage by whipping up dishes in her London flat, doing it all alone makes her homesick: “Mas masarap sana yung may sous chef sa tabi ko, like what my yaya does in Manila. I would tell her, ‘Ate paki-peel naman nung garlic.’”

We ask her if she also relishes the freedom and independence of living and working alone in a foreign land. Her parents, she admits, “had been strict to a certain extent. Sometimes I feel like I still have a curfew even if I’m already 26… I’m a daddy’s girl, like I can say, ‘Dad I want this…’ But Mom is very strict on those things. (She would say) ‘Ay wala, if you want it, you have to save up for it.’ So, I like that kind of balanced upbringing.”

At age 5 she fell in love with musical theater songs while watching “Stages of Love,” a dinner show starring Audie Gemora and Monique Wilson which her parents produced, with Freddie Santos as director.

“I remember pulling a chair and sitting in front of the stage to watch it,” she recalls. “Grabe yung impact sa akin nung show na yun.”

She was 8 years old when she started acting in musicals; she would appear in several Resorts World Manila productions, the most recent as Tuptim in “The King and I,” prior to joining “Miss Saigon.”

“I can sing the songs in my sleep,” she quips when asked how familiar she has become with the Claude-Michel Schönberg and Alain Boublil musical best known for winning the Laurence Olivier and Tony awards with Lea Salonga as the original Kim.

“If you sing the songs on a regular basis, they become like muscle memory, a routine, so you try to experiment. But the risk is that you can forget some of the lyrics,” she added.

Playing Kim reflects her upbringing: “Eva grew up in the States. She comes off strong and determined. I’m Asian, meron akong slight touch of Maria Clara in how I approach the role.”

Manalang, a graduate of Media Production in Assumption College Makati, admits she’s not exactly naive when it comes to romantic relationships. She had to break off with a boyfriend before she flew to London.

But they remain good friends, and he actually picked her up at the airport when she arrived a few weeks ago for a brief holiday in Manila.

Sounding excited because she was hanging out with friends she hadn’t seen for some time, Manalang bade goodbye—walking with a sprightly gait in her stilettos, ready to have as much fun here as she’s been doing in London.