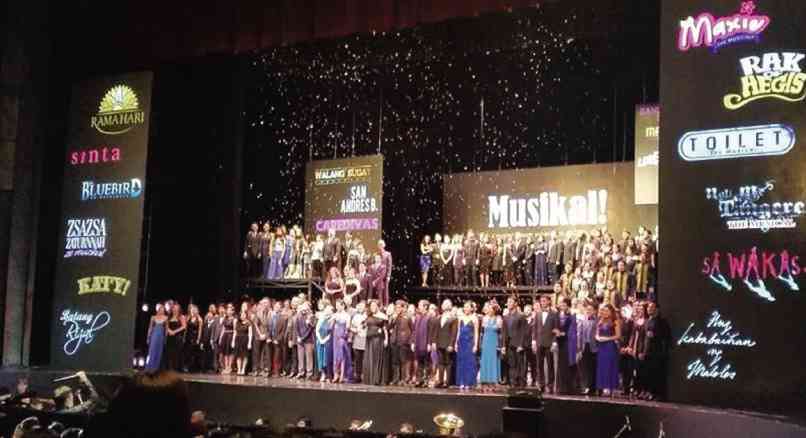 It was a night bigger than any other.

While ABS-CBN assembled its bevy of celebrities for its annual, highly publicized dress-and-glam-up festival known as the Star Magic Ball, the palatial Tanghalang Nicanor Abelardo of the Cultural Center of the Philippines (CCP) played host to an event of even grander and genuinely international scale.

How often, after all, do you get the biggest names of the Philippine performing arts in a single room: the likes of Lea Salonga, Joanna Ampil, Menchu Lauchengco-Yulo and Audie Gemora watching Isay Alvarez, Robert Seña, Dulce, and Sheila Francisco perform the works of Ryan Cayabyab, Vincent de Jesus, Mario O’Hara and Bienvenido Lumbera?

It was also a night unlike any other, as the sweet smell of victory for the true-blue Pinoy talent pervaded the air.

Every year for at least the past five years, the CCP’s Main Theater, as the venue is popularly known, has played host to sold-out touring productions of Broadway musicals—“Cats,” “The Phantom of the Opera,” “Wicked,” to name a few.

So it was only fitting and, in many ways long overdue, that the hallowed theater would once again be occupied by a homegrown Filipino production of similarly colossal proportions—or some 20 of them.

“Musikal!”—a revue of songs and numbers from original Filipino musicals, mostly performed by the original casts themselves—can be read as the local theater industry’s response to the endless parade of foreign imports finding home in the CCP, and the deafening standing ovation that capped its gala night on Sept. 6 was nothing if not life-affirming.

Indeed, in the last few years, something resembling prosperity has descended upon the original Filipino musical, as evidenced by the ever increasing amount of new works and revivals being churned out annually, matched only by an undeniably heightened awareness, interest and patronage on the part of the audience.

Philippine Educational Theater Association’s (Peta) “Rak of Aegis,” for example, just recently celebrated its 100th performance, while playing to sold-out houses show after show—a kind of vindication for those sadder days when the original run of Mario O’Hara’s “Stageshow” had to contend against “Phantom” back in October 2012.

Almost every notable theater company was present, from industry bulwarks like Peta and Tanghalang Pilipino to the fledgling 4th Wall Theater Company and Culture Shock Productions and the student-run Blue Repertory and Dulaang Sibol of Ateneo.

Most impressive, though, was the roster of performers. Imagine: Established names like the husband-and-wife tandem of Alvarez and Seña, newly minted stars such as Aicelle Santos and Myke Salomon, and emerging young talents like Jayvhot Galang (in the title role of “Maxie the Musicale”) and the kids of Trumpets’ “The Bluebird of Happiness”—all sharing the same stage in number after rapturous number.

On that note, Alvarez and Salomon were definitely the evening’s MVPs, each headlining at least three shows of varying genres: the former shifting from jazzy and growly in “Katy,” to rock in “Rak” and a dash of the operatic in “Himala the Musical”; the latter, also in “Rak,” as well as doing pop in “Magsimula Ka!” and a bit of cross-dressing in “Caredivas.”

Five rectangular panels, upon which GA Fallarme’s video projections served as a kind of onstage digital program, flanked the two-tier skeletal performance space (set design by Ricardo Cruz). If anything, such a bare stage only served to focus attention on the singing, the acting and the music.

The ending of Act I, in particular, totally captured the spirit of the show: First, the Philippine Madrigal Singers in a specially arranged choral medley of Cayabyab’s “Noli Me Tangere the Musical”; followed by the cast of “Rak” singing “Munting Pangarap” to an a cappella finish. In other words, just voices, plain and gorgeous.

The Philippine Philharmonic Orchestra conducted by Gerard Salonga was the other half of the evening’s success, summoning to vibrant life some of the best musical theater compositions ever written. The overture was one of those rare times when you wished it would just go on and on, especially during that solemnly haunting instrumental of “Matimyas Mabuhay sa Sariling Bayan” from “Noli.”

It was a moment of pure musical theater magic, a perfectly realized conclusion to an evening that evoked decades’ worth of memories and celebrated some of the highest points of this brand of show business.

Amid shouts of “Brava!” and teary eyes, one could only imagine—and silently, excitedly wait for—what could possibly be in store in five years’ time.