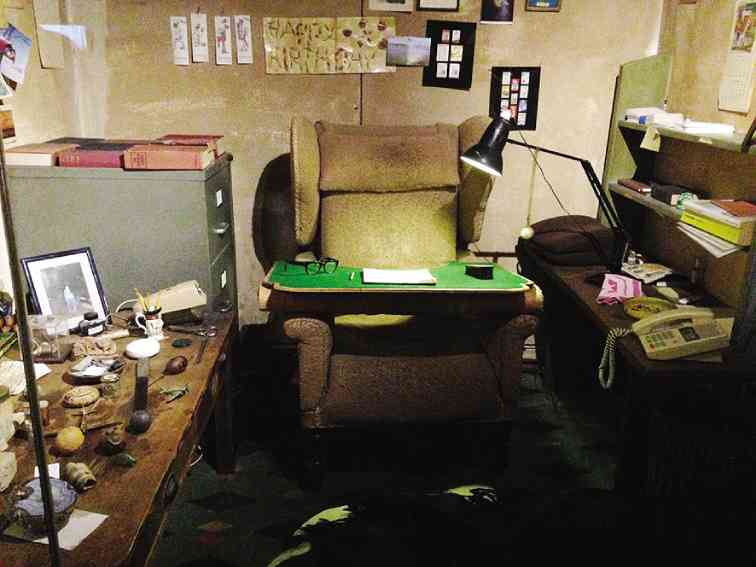 ROALD Dahl’s writing hut, preserved as he had left it

My day with fantastic Mr. Dahl

‘If anybody wants to see his false teeth and an eyeball, follow me!” said a tiny voice with a British accent.

I looked down to see a little boy with fiery red hair, a pint-sized Harry. He ran out of the room as quickly as he had come in, with other British school kids trailing him to, I assume, look at Roald Dahl’s dentures.

It wasn’t a golden ticket, but a Google search, that brought me here. It had been a very rainy morning in London and, wanting to escape, I whipped out my phone and entered “day trips outside London” into the search bar.

Brighton, Oxford, Bath and Windsor Castle faded into the background as three words jumped out at me: Roald Dahl Museum.

I never outgrew my love for Dahl and his work. Deciding that I wanted to spend an afternoon swimming in his magic was a no-brainer.

I took the tube to Marylebone, then caught a train to Great Missenden, a village in the Chiltern Hills of Buckinghamshire 45 minutes outside of London.

Great Missenden Library, which stands outside Great Missenden Station, is where the precocious child Matilda went to regularly while her mom was off playing bingo.

The red petrol pumps at 64 High Street were said to have inspired the garage in “Danny the Champion of the World.”

A few steps away is Crown House (70 High Street) which looks like Sophie’s orphanage in “The BFG.”

I continued to make my way down High Street where the museum is supposed to be, letting Google Maps guide me. I knew I had reached the right place when I saw the purple and brown Wonka gate. There was a big “50” on it because it has been 50 years since “Charlie and the Chocolate Factory” was first published.

I almost expected a cane-wielding Willy Wonka to come out. Instead a soft-spoken lady welcomed me to the museum, handing out a map to Roald Dahl’s Village Trail. “Walk around the village,” she said. “You will find some of his inspirations. And if you walk a little more, you can visit his grave.”

Although created for children, The Roald Dahl Museum and Story Centre is a must-visit for fans of all ages. Inside was a celebration of Dahl’s life and work.

There were videos, audio clips, pictures and letters from his childhood, his days as a pilot and as a writer. There were little mementos of his life—his Royal Air Force pilot helmet and binoculars, school slips, first editions of his books, the magazine that first published him, his ideas books.

The Willy Wonka costume that Johnny Depp used in “Charlie and the Chocolate Factory” was on display, including his candy-filled cane.

There were kids running around— adorable school kids with their teachers and parents. I was the only adult guest who wasn’t chaperoning a child but I felt no shame. We are all children in Dahl’s world.

Giant Wonka chocolate bar doors led to the first interactive gallery called “Boy,” which, like his autobiography of the same name, is a celebration of Dahl’s early years. On the wall were words from “The Great Mouse Plot,” accompanied by the drawings of Quentin Blake who had illustrated Dahl’s work since 1975.

There were early drafts of “Charlie and the Chocolate Factory” with a list of seven, not five, children who were supposed to enter Willy Wonka’s factory. The list included Marvin Prune, “a conceited boy” and Miranda Mary Piker, “a girl who is allowed to do anything that she wants.” Mike Teavee had a different name back then—he was called Herpes Trout. Another draft identified Oompa-Loompas as Whipple-Scrumpets.

There was evidence of Dahl’s deep love for chocolate—from his days as a chocolate tester for Cadbury and a handwritten speech about the history of chocolate.

In the Solo gallery, visitors get to witness Dahl’s adventures and see that his real life was just as exciting as his fiction.
He traveled to Africa and eventually became a fighter pilot. There were also snapshots of his family life and stories about his wives and kids.

I opened a drawer and there it was—the dentures little Harry had been talking about. Dahl had paid for them using the money he made after his first article was published in The Saturday Evening Post in 1942.

But the best part for me, hands down, was Dahl’s writing hut, also found in the Solo gallery. I spent the most amount of time there.

Two years ago, they carefully moved the interiors of the hut from his home to the museum, painstakingly preserving it as he had left it. They brought everything, even the linoleum floor, polystyrene insulation and the paper clips that held the postcards on the wall.

There were many fascinating things about his work space. His writing chair, originally owned by his mother, which he modified to minimize body pain (he had injuries after his plane crashed in Libya during World War II). The writing board he designed with his friend Claud Taylor (who people say is the inspiration for Danny’s dad). The roll of corrugated cardboard he used to adjust the height of his writing board. The portrait of Olivia, Roald’s eldest child who died when she was only 7, which hung right across his chair so he could always see her. The sleeping bag that he used to keep his feet warm while writing. The many knickknacks that surrounded him as he worked—a dried mangosteen, shavings from his own spine, the top of his femur (given to him by his doctor after his hip-replacement surgery), the clothes brush he used to clean his writing board every day, the lamp that was part of his writing ritual, letters and cards from his kids and grandkids, his walking stick, his favorite Dixon Ticonderoga pencils, rocks, ceramics and sculptures.

There was one thing missing though—the ball of silver foil. Roald used to eat a bar of Cadbury Dairy Milk every day and he squashed the foil wrappers together, forming a ball that now weighs 310 grams.

I kept looking for it but never found it. At one point, I recruited a mom to help in the great foil ball hunt but her search proved futile, too.

People came and went but I just kept standing there, transfixed. It was surreal. Roald had worked in that space for decades, writing for four hours a day, creating the stories and books that we continue to cherish. I was overwhelmed.

When I finally tore myself away from the writing hut, I explored the rest of the museum, doing a little shopping in the gift shop (it’s a Roald Dahl fan’s dream come true) and stopping at Café Twit which serves Sandwitches, Fizzy Lifting Drinks, Oompa-
Loompa Lunch Bags and sweets that would make Willy Wonka proud.

There was only one place left to visit— Roald Dahl’s resting place.

I followed the map, walking past what used to be his favorite butcher shop. The intersection of Church Street and Church Lane led me to a tree-lined winding road. I kept walking, eventually crossing a bridge. I was a little breathless by the time I reached the Church of St. Peter and St. Paul.

“Look for his grave near the memorial bench under the tree,” the map said.

I made my way to the cemetery on the left side of the church and found a young man tending to Roald’s grave while listening to Lorde sing “Royals.”

When he noticed me, he turned the volume down and stopped tearing out patches of grass. “Hi,” he said, smiling as I approached. He looked like a cross between Ansel Elgort and a One Direction boy.

“Hi,” I said, quietly staring at Roald’s grassless grave, wishing I brought something. Flowers. A letter. A Cadbury bar. Anything.

I had nothing. So instead, I said a silent thank you. For the stories. The magic. The words that have the perpetual power to transport me back to my childhood.

I crossed the bridge again and soon found myself back on High Street, walking past the post office that used to deliver 4,000 letters from fans all over the world every week to Roald Dahl’s home. They say letters for him continue to arrive there.

It started to drizzle, just in time for my goodbye to Great Missenden.

As the train pulled away from the station, I thought about a little verse Roald had sent to school children who had written to him in 1985:

As I grow old and just a trifle frayed,
It’s nice to know that I have sometimes made
You children and occasionally the staff
Stop work and have instead a little laugh

Then I realized that after spending hours learning about his life and visiting his grave, I did not know how Roald Dahl died.

But maybe it didn’t matter. Because I know how he lived. And as long as there are children reading his books, he will always be alive.

The Roald Dahl Museum and Story Centre is at 81-83 High Street, Great Missenden, Buckinghamshire. It is open from 10 a.m.-5 p.m. on Tuesdays to Fridays and 11 a.m.-5 p.m. on Saturdays and Sundays.

Museum admission is £6.60 for adults, £4.40 for children who are 5-18 years old, students, adults who are 60 or older and people with disabilities. Entrance is free for kids under 5.