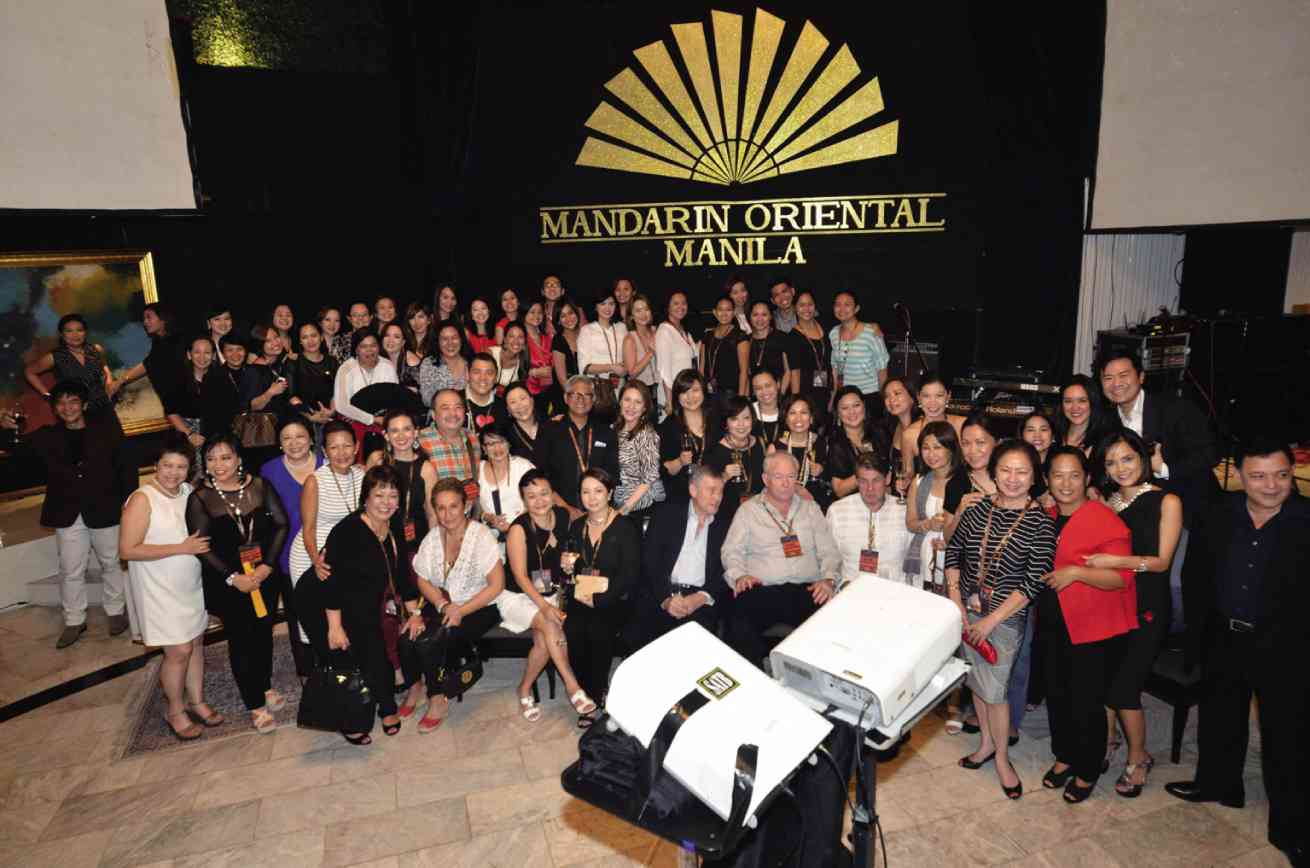 THEMANDARIN STAFF poses for the last time before the hotel’s closing.

Charisse moves on to City of Dreams; Meldy’s couture a sell-out

People said goodbye to Mandarin Oriental Manila last week as if they were losing a true love. In truth, perhaps they were.

Somehow, the past 38 years, the five-star hotel has had a place in our hearts, and our individual or collective memories of it are interesting enough to compel us to reminisce and revisit the place one last time.

On top of the dinners and lunches we’ve had there, a few of them with the iconic feng shui expert, the late Paul Lau, who always had interesting rapport with Jullie Yap Daza, our recent memory of Mandarin was how it gave refuge to my son and a friend at the height of Supertyphoon “Ondoy. ”

They were among the hundreds of inbound passengers stranded at arrival because vehicles couldn’t navigate the inundated roads leading to the airport. The gridlock was a nightmare, with no end in sight.

Coming to the rescue was Charisse Chuidian, Mandarin’s head of PR and Communications, who went out of her way to let my stranded kin get on the bigger Mandarin van so they could be brought to the hotel where they could sit out the storm and traffic.

With a PR like Charisse, there was no way Mandarin could not be synonymous with home and sanctuary. For many others through the decades, Charisse has been the quintessential PR who is naturally gracious (not “plastic”), willing to go the extra mile to help guests and media, yet very professional.

This pro, who started as a writer for ABS-CBN, shortly after school (not many people know that), then on to Ayala Corp. for five years, has been in the hotel industry for 38 years—16 of them at Century Park Sheraton, 22 at Mandarin.

But even before I met Charisse Garcia (before she married Jun Chuidian) as the PR of Century, I already knew of her as the older sister of Karina, a pre-teen I never met but whose very brief life story I just read about and couldn’t forget.

Karina drowned in the family’s native province of Dagupan, where her father, the late Ermin Garcia Sr., published a hard-hitting newsweekly, the Dagupan Sunday Punch.

Karina’s life was the subject of a well-written pamphlet which we read in high school. She was bubbly, kind and reached out to the community. So the town wept as it buried this young daughter who drowned in the sea.
I was curious to meet her older sister, Charisse. (Another tragedy would befall her family when her father was felled by an assassin’s bullet, as he worked in his newspaper office. In honor of this journalist, a street would be named after him in Quezon City. His son, Ermin Garcia Jr., would continue the Sunday Punch. )

It came as no surprise that, when it was known that Mandarin was closing its doors to give way to new property development plans on its site, people felt the urge to visit and dine again in the hotel, and bond with Charisse and the affable general manager, Torsten van Dullemen. They knew the two executives would graciously welcome them on the days leading to the closing.

Last Monday, the eve of its closure, on an impulse, we dined at Paseo Uno on the last night of this restaurant that has served international buffet for so many years. We knew that night would also be the last time we’d be seeing the Captain’s Bar, indeed, the hotel itself.

At the Paseo we ran into many others who also wanted to see the hotel one last time and have their final dinner.

At another table were Edu Jarque, an ex-hotelier himself and foreign service official, Bambi Harper and Susan Calo Medina. Dennis and our own Sea Princess, Tessa Valdes, caught up with the dinner crowd.
At another table were Nina Daza Puyat and her husband, who were celebrating their wedding anniversary.

Indeed, the past few weeks many couples, to whom Mandarin symbolized a milestone, dined in or checked in, so that in the last few days, about 30 rooms remained booked, way beyond the hotel’s expectation.

A young expat went to great lengths—he booked the Mandarin suite (a five-figure amount a night) for an overnight stay with his girlfriend (see Cheche Moral’s story Sept. 10, 2014, page 1), and made sure he was the last guest to check out Tuesday at past 1 p.m.

As she was having her last serving of her favorite Indian dish at the Paseo buffet Monday night, Margarita was effusive about her Mandarin memory—“I can’t find any other place to compare its personal, warm service. And their attention to details has been consistent through our growing up years.”

It was interesting to note that each of the 400 employees was given an overnight stay with two members of one’s family these final months, to experience and savor the lifestyle that one had served up all this time.

Perhaps it is the passing of such old world graciousness that we are seeing with the closing of Mandarin Oriental—no matter that it is reopening in six years in Makati. Given how the world changes with each technology-driven minute, the lifestyle will be so different by then.

Our table was curious about the hotel fixtures and furnishings that have been auctioned off, especially the artworks (Phyllis Zaballero, for example) and the silverware. Not known to many, Mandarin continued to invest in good silver for its banquet service.

We were told that many, if not all, of its staff have already landed good jobs.

As for our dear friend Charisse—she joins the City of Dreams as vice president for public relations on Sept. 19.

Indeed, in so many ways, a goodbye is not really a goodbye. Everything is a mere transition.

We were happy to note that the cocktail and formal wear of society icon and philanthropist Imelda “Meldy” Cojuangco sold very well last Saturday at the Hands On Manila’s Vintage Bazaar. All collectibles, they were by fashion’s stalwarts Joe Salazar, Pitoy Moreno, Auggie Cordero and Jan Garcia.

We suggested to her daughter-in-law Lizette Cojuangco that it might be a good idea to put her haute couture wear on exhibit, so that fashion design students, indeed today’s generation, could see up close the design, craftsmanship and exquisite details of our foremost designers, of whom Mrs. Cojuangco has been a patroness.