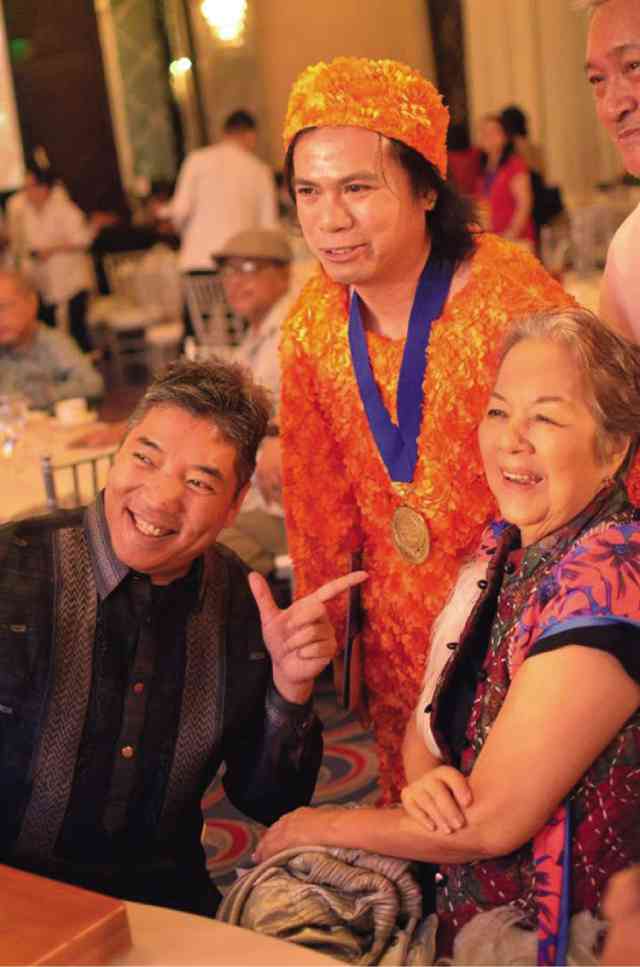 You will now be punished with the keynote speech I gave on Palanca Awards night this September.

Well, looks like the Palanca Awards has finally run out of scholarly, respectable speakers. You’re down to me, Apolinario Mabini on a wheelchair but without the brains, since I can’t even memorize my own speech. If it helps any, I’m 84, the age when Tandang Sora was exiled to Guam. As my friend predicted, you just got to get old enough and gray enough and you’ll get invited as guest speaker.

What can I possibly talk about that can be useful to a young writer’s life? All the so-called successes of my professional life were due to tigas ng ulo. Because I never learn. Even that “I never learn” I fought for. I kept forever hitting my head against closed doors.

In the days of Magellan I took up my MA. I finished all the required subjects but couldn’t for the life of me write a thesis.

At that time, the fashion was to analyze the works of a Western author (Filipino authors weren’t even counted yet). Research meant gathering everything that was written about that foreign author, sewing them together and writing a brilliant summary of all those thoughts that were never yours.

I was terrible at that sort of thing. So I begged, “I am a storyteller, a fiction writer. I have 13 short stories here with me, all typed and ready, puede ba, ’yon na, please, please?

Tumanda na ako, wala pa rin akong MA. Finally, there was a kind professor who took pity on me. So mine became the first creative writing thesis accepted in Ateneo. It eventually became a book, “The Butcher, the Baker, the Candlestick Maker”—don’t ask me why such a dumb title. But after that, fiction became standard thesis fare in Ateneo. I got lots of bukol but the door had broken down.

Next, I observed that people liked to attend fashion shows. The audience didn’t like serious stuff—yet. So I said I would invent a fashion show that is not a fashion show but a learning show. I couldn’t find a sponsor because they wanted me to define what “it” was.

I tried. Not a fashion show, I said, but a history lesson. But not the evolution of the Philippine saya. That’s so passé. Besides there would be an art installation of stars on the ceiling, but it is not an art exhibit.

There would be lots of hats, one shaped like a galleon, another like a dunce’s cap with bells, another with a toy car on it but it is not a hat show.

Then Nonon Padilla gave it a story line and, don’t look at me, it was only my idea. Everyone together created it, and so in 1995 “Jamming on an Old Saya” was held at the Abelardo Theater of the Cultural Center of the Philippines to tremendous applause without any sponsors. The lumps on my head were getting to look like the Sierra Madre, but the door had opened.

Oh, I had also decided to go into book publishing back in 1976. GCF Books. It sounded important. It pleased me. Practically the only books in the market then were imported, mostly from the US. Except for local textbooks, the only existing Filipiniana were selling at P8 to P12. And they were gathering dust in the bottom shelves of bookstores.

I thought, if cheap books weren’t selling, expensive books should. It seemed so logical to me! I wanted intelligent, luxury books with lots and lots of pictures (in case the buyer was illiterate). It would be on Filipino subjects never tackled before in respectable fashion—food (not recipes), architecture, bahay-na-bato and ethnic, furniture, street names, the jeepney, native religion, folk stories.

I handpicked scholars who were good writers and the best visual artists to flesh out the concept. The books cost about P140 to P350 each, a pretty penny then.

GCF Books were well-received. But a UP professor lashed out during a forum: “Why do you make books for the rich and not books that everyone can afford?” Everybody clapped. I was horrified. I should? I thought that was the job of the government.

How could you make a Rolls Royce book and sell it for the price of a jeepney, just because some people could not afford them? Ayaw ng mahal, ayaw ng mura! Pero gusto ng maganda! I was just so tired I simply bowed my head and cried.

To top it all, my beautiful babies were being called “coffee-table books” like some expensive decorative vase or fancy ashtray. It sounded insulting. Do not touch. Not for reading, please. But some did read them, then more did. GCF Books got a following. A number of the books got awards. Some even began reserving copies in bookstores on a lay-away plan.

The door had crashed and I like to think, after that, every other publisher could make beautiful and intelligent books as good as mine (well, almost) and even make the handsome profit that I couldn’t.

Soon after that, I wanted to produce a play. Walang dala. I wanted to soak in the experience of an honest-to-goodness production. I didn’t know how to write a play, or direct one. I loved visuals—sets and costumes, but didn’t know how to make those either. The only talent I had was knowing by instinct how to choose the right person for the right job in any art project. Some of them did not know each other, or barely. Putting a strange mix together in a pot always produced a unique alchemy.

When I was a child, our servants were prohibited by my father to tell me stories about aswang that divided at the waist and flew with its upper part into the night. So, of course, I got fascinated with the aswang, its bloody intestines trailing.

About 1995, I came upon a sheaf of dusty papers in the still unorganized Filipiniana section of the Ateneo de Manila library. They were reports by students of Ateneo de Naga assigned by their teacher, Fr. Frank Lynch. It was about the Bicol aswang. The descriptions ranged from the terrifying to the hilarious (such as the aswang’s hair was so stiff that one wiry strand could slice cheese.)

I combed through the mishmash of information, which I classified and rewrote intelligibly for my slim volume called “The Aswang Inquiry” (1998), with full credits to Fr. Lynch’s students.

Later, I interested the young Rody Vera, then a stranger to me, to write a script for an aswang play.

When we began, Rody couldn’t tell an aswang from a seminarian. But he eventually fell madly in love with the creature and wrote “Luna: An Aswang Romance” which won him a First Prize Palanca award. In it, Rody had switched the roles. The aswang were the victims and the humans were the bad guys. The bida was called Luna, after my mother’s family name because she and I were always at odds. Producing it was my exorcism and redemption.

For director I wanted Anton Juan, the only one I could imagine to be devilish enough to give it fangs. “Luna…” was staged in the big AFP Theater of Camp Aguinaldo in Febuary 2000 for two weekends. It was an unforgettable piece and won an award as well. I was its producer again, and lost my pants as well.

When you bang your head against a closed door, you always lose money. But after this door crashed open, my forever collaborator, Manny Chaves, and I, earned enough credibility to get sponsored by a company like Bench to do a book on Pinoy pop culture and line-produce several skits minus hunks in briefs.

We continued to still break through smaller doors by trying to sneak in Pinoy culture, meaning masa culture, to the elitists.  In the NBC tent of Bonifacio Global City, we sent the first live Darna flying onstage while reading the book we were launching. We introduced the original unexpurgated Aegis group that sang their lungs out to a Makati audience, including Don Jaime Zobel de Ayala, who gave the band a standing ovation.

Today there are many more closed doors to new things that I know nothing about. But when you are sure you have a good original idea and convinced that it will work, bang a determined head against the door. It will split open faster than your head will. And there will be magic behind that door that you never dreamed possible. An experiment finally gaining respect, opening a new path for neophytes to follow and improve upon.

Tapos na po. Sorry matagal na pong may sayad. Thank you for your patience. Good night, girls and guys, and sleep tight—with whoever! Love you!