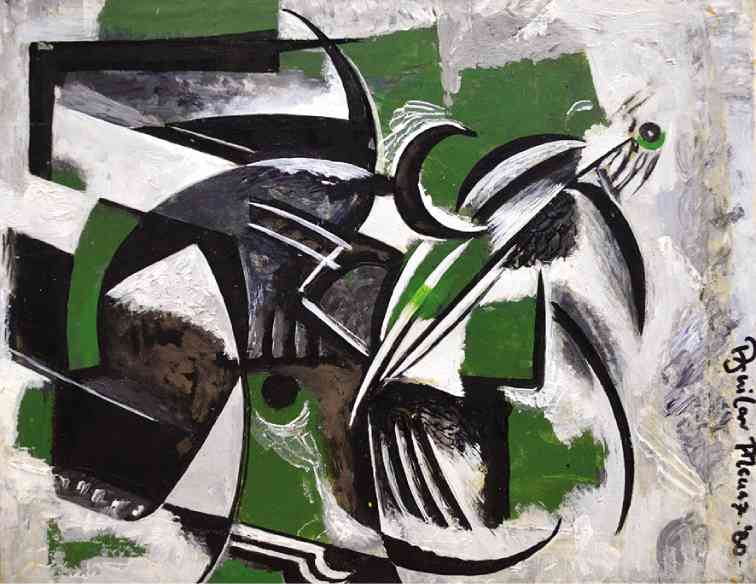 To be proclaimed soon in Malacañang ceremonies as National Artist for the Visual Arts, the late Federico Aguilar Alcuaz (1932-2011) is among the great artists of the Philippine Modernist era.

As an artist, his intellectual curiosity matched the boundlessness of his imagination, leading to an oeuvre that spans  landscapes, portraits, abstract works, to doing multimedia collages, mosaics, ceramics and tapestry.

Perhaps it is in his abstracts where the lyrical quality of his work is evident.

Raw yet driven by a quest for balance and harmony, an Alcuaz abstract is a symphony on canvas.

The sixth of 11 children of Mariano Aguilar and Encarnacion Alcuaz, Federico Aguilar y Alcuaz  graduated from the Ateneo de Manila Law School in 1955.

He was, however, an artist at heart. While still in law school, he enroled in Fine Arts classes at University of the Philippines, where his teachers included National Artists Fernando Amorsolo and Guillermo Tolentino.

In 1955, upon the recommendation of painter and art patron Fernando Zobel, he received a scholarship grant from the Spanish Ministry of Foreign Affairs to study at the Academia de Bellas Artes de San Fernando in Madrid.

He later moved to Barcelona, where he joined an art group called La Puñalada, after the café group members would go to.

Other members of La Puñalada were famous painters Antoni Tàpies and Jordi Aluma.

It was also in Spain where he started using the Spanish custom of including the mother’s maiden name, and signed his works Federico Aguilar Alcuaz.

He was awarded the Diploma of Honor at the International Exhibition of Art Libre in 1961. He received the decoration of Arts, Letters and Sciences award from the French government in 1964; the Order of French Genius in 1964. He was awarded by the Philippine government with the Presidential Medal of Merit for his outstanding accomplishments in visual arts in 2007.

Works that will be on display are never-before-seen pieces which  have been culled from the personal collection of the artist’s family.

With far more intricate details than the earlier abstract works the public have already seen, these pieces show an artist at his absolute free-flowing self, and demonstrate exactly why he is held in the highest regard by critics, art historians and the art-loving public.