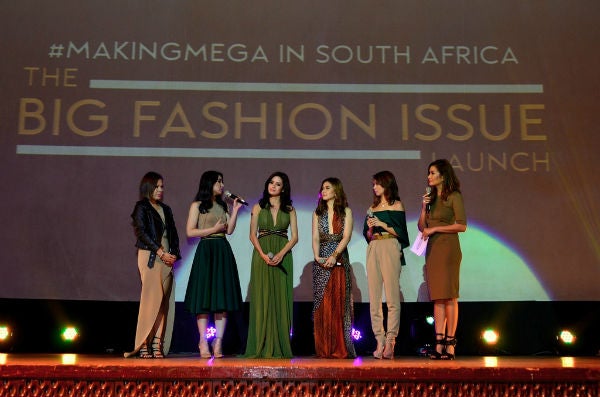 The event was graced by the September Issue’s cover girls Erich Gonzales, Julia Barretto, Kathryn Bernardo, and Maja Salvador. As soon as people stepped inside Meralco theater, they were welcomed by a safari-themed venue welcomed by tribal drum beaters that transported them to a journey to South Africa.

Phoemela Baranda, the host for that night, called on founder and CEO Sari Yap who welcomed everyone. Distinguished guests and fans of the four celebrities flocked the venue in support of the September issue and the Making MEGA fashion documentary.

A screening of the documentary took everyone into an adventure of coming up with 436 pages, including the experience of shooting Erich, Julia, Kathryn, and Maja in Northern Cape, South Africa.

The film was not only about how they have made the magazine but how the team had built relationships and experiences that they will treasure forever. Towards the end of the film, Sari Yap realized that she had found an editor-in-chief who can rightfully take her place in the person of Peewee Reyes-Isidro.

The program wrapped up with the first and formal introduction to the public of MEGA’s new editor-in-chief after which the whole MEGA and Making MEGA in South Africa teams shared the spotlight onstage in celebration of the biggest issue yet. An after party at Marco Polo’s VU’s Bar ensued where everyone had a great night.