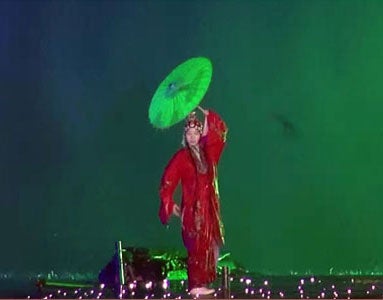 HANGZHOU, China—A white crane from a distant horizon descends into the West Lake and becomes a wise gentleman. Just as another transforms into a young, beautiful lady as it touches the water.

With a tranquil lake and picturesque hills as backdrop, they fall genuinely in love with each other.

The stage play, based on a local folklore, transforms a one-square-kilometer section of the lake into a theatrical space as it weaves a narrative of love and misery through a spectacle of light, sound and movement.

“Impression West Lake” is an adaptation of “The Legend of the White Snake,” a folktale that dates back to the Southern Song Dynasty (1127-1279).

As the story goes, a female white snake takes a mortal form as Bai Suzhen. On the Broken Bridge in West Lake, she meets a handsome scholar named Xu Xian. Their romance leads to marriage, and they are blessed with a son.

But Buddhist monk Fa Hai steps in to save Xu Xian’s soul and sends Bai Suzhen to a deep well at the Leifeng Pagoda as a prisoner. After two decades of fierce battle, Fa Hai suffers a crushing defeat and the pagoda crumbles. The family is reunited.

The five-act “Impression West Lake” begins with the young couple meeting on the Broken Bridge. As it is drizzling, he lends his green umbrella to her, an act amplified by female performers clad in traditional Kun opera costume dancing gracefully while holding Chinese paper parasols.

Soon love blossoms. Everyone in West Lake is in high spirits and a school of red fish, seen as beams of light in their hundreds, gleefully glides through the lake water.

Then a roll of drums is heard from a distance, slowly turning into a furious rhythm. The lady crane is dead.

The scene of the drums glimmering while being pounded by hundreds of performers reminds me of the opening ceremony of the 2008 Summer Olympics. It’s no coincidence. “Impression West Lake” director Zhang Yimou also lent his nuanced artistry for the Beijing event that left a billion global audiences in awe.

And even as it pales in comparison to the mammoth theatrics in Beijing, “Impression West Lake” has its own allure. Its story is told in the very lake where, hundreds of years ago, the legendary characters fell in love and fought a fierce battle to stay together.

The set, though may initially appear as just an expansive body of water, holds innovative stage effects. A floating house looks brightly lit as it faces the audience, or may slowly vanish into darkness.

Its stage is big and strong enough to hold hundreds of swiftly moving actors. A large part of it is set three centimeters below the water and may descend further to about half a meter. With state-of-the-art stage lighting, the splash of water as performers wade through it creates a visually interesting canvas.

The highlight of the show is a mind-blowing scene when a massive triangular structure covered by a thick fog slowly rises from the water to form the “bridge of heaven.” The couple is finally reunited.

The theatrical piece’s plot, though, is too frail and thin that amid an explosion of color and sound it may not survive drowning.

For a weary tourist wanting respite from the battles and stresses of city life, this visual magic stays like a beautiful dream that never ends.