DOH warns: Pet owners who kiss their dogs on the lips may get rabies | Inquirer Lifestyle ❮ ❯ 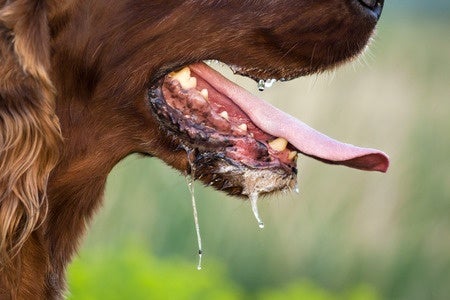 DOH warns: Pet owners who kiss their dogs on the lips may get rabies

MANILA, Philippines—Giving your pooch a smooch may not be a good habit.

Even if a pet dog has been vaccinated, there is still a chance that it may get rabies and could give the deadly virus to his master, according to Dr. Raffy Deray, program manager of the Department of Health (DOH) National Rabies Prevention and Control Program.

Deray said the DOH discouraged pet owners from exchanging kisses with their dogs as it could also cause a swap of other dangerous diseases aside from rabies.

“We really discourage that practice because you will never know when a dog will bite you and you may also get other diseases aside from rabies,” said the DOH official at a press briefing in Quezon City on Wednesday, ahead of the celebration of World Rabies’ Day on Sept. 28.

Rabies, a viral disease, is transmitted mainly by bite but exposure may also occur through contamination of broken skin or mucous membranes with the saliva of an infected animal.

The lips are a mucous membrane and that the virus could enter the body when an infected animal licks this area, according to Deray. “Even if your lips have no cuts, if an infected saliva has contact with the lips, you can get rabies,” he said.

Studies abroad have also shown that dog owners could get gum diseases from their pets, which could lead to periodontitis, an inflammatory disease of the mouth tissue, if left untreated.

Some owners may frown on the idea of not kissing their vaccinated pets but Deray cited factors that must be considered to ensure the efficacy of anti-rabies shots.

These include the health condition of the dog when administered the vaccine, the frequency of the vaccination and the storage of vaccines. “The truth is, we have seen cases that even if the dog is vaccinated against rabies, it still transmitted rabies,” Deray told reporters.

“Other than the issues of cold chain [management of vaccines], it could be that the dog was vaccinated when it was sick or its immune system was down because if its immune system is not good, you can’t get optimum results of the vaccine,” he explained.

In the Philippines, dogs are still the number one cause of animal bites and rabies cases, accounting for 84 percent of all cases. At least 15 percent of these cases are attributed to cats while one percent to other animals.

“But despite our limited resources we have achieved significant gains in controlling rabies in the last five years … the incidence of human rabies has declined by 27 percent from 2010 to 2013,” said Deray, noting that post-exposure prophylaxis has become more accessible to patients in animal bite treatment centers.

So far, 14 areas across the country have been declared rabies-free. At least 10 more areas will be declared free of rabies by the end of the year, according to Deray.