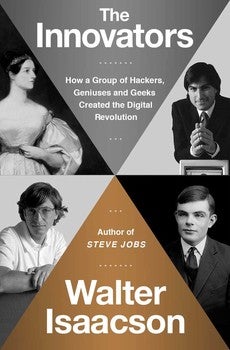 NEW YORK — Walter Isaacson’s group portrait of digital pioneers and cartoonist Roz Chast’s illustrated memoir about her parents have made it to the nonfiction longlist for the National Book Awards.

Isaacson’s “The Innovators” and Chast’s “Can’t We Talk About Something More Pleasant?” were among 10 books announced Wednesday by the National Book Foundation. Also cited were a pair of books about early U.S. history, John Demos’ “The Heathen School: A Story of Hope and Betrayal in the Age of the Early Republic” and Matthew Stewart’s “Nature’s God: The Heretical Origins of the American Republic,” and two World War II histories, Ronald C. Rosbottom’s “When Paris Went Dark: The City of Light Under German Occupation, 1940-1944” and Nigel Hamilton’s “The Mantle of Command: FDR at War, 1941-1942.”

Other nominees included works on theater, John Lahr’s “Tennessee Williams”; science and philosophy, Edward O. Wilson’s “The Meaning of Human Existence”; and a pair of books set overseas, Anand Gopal’s “No Good Men Among the Living: America, the Taliban, and the War through Afghan Eyes” and Evan Osnos’ “Age of Ambition: Chasing Fortune, Truth, and Faith in the New China.”

Chast’s memoir is the first cartoon work to receive a nonfiction nomination, and she was the only woman selected by the judging panel, which included three men and two women. Among the books not chosen were Leslie Jamison’s acclaimed essay collection, “The Empathy Exams,” and Elizabeth Kolbert’s highly praised “The Sixth Extinction: An Unnatural History.”

Isaacson is widely known for his biographies of Steve Jobs and Benjamin Franklin, but had never been a National Book Award nominee. The only previous nominees on the longlist were Wilson and Demos.

The longlists for young people’s literature and poetry were announced earlier this week, with fiction nominees to be revealed Thursday. The categories will be narrowed to five finalists each on Oct. 15. The winners will be announced Nov. 19 at a ceremony in New York City.

Steve Jobs: I wanted my kids to know me