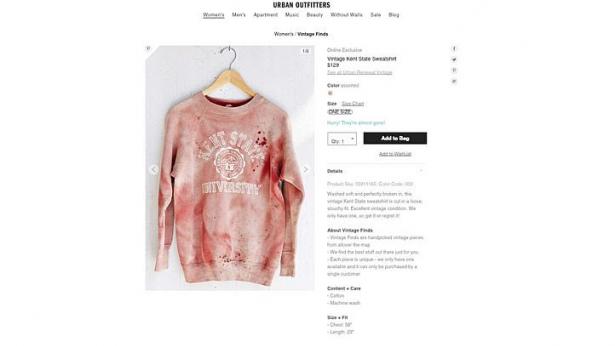 Images of the sweatshirt widely circulated on the Internet and sparked outrage in online forums. -- PHOTO: URBANOUTFITTERS.COM - See more at: http://www.straitstimes.com/news/world/united-states/story/urban-outfitters-apologises-kent-state-university-red-splattered-swea#sthash.QsPhoabS.dpuf

SINGAPORE—Retailer Urban Outfitters has apologized on Sept 15 after criticisms that its Kent State University sweatshirt that appeared to be splattered with blood-red dye was a look reminiscent of the 1970 shooting in the campus that left four people dead.

In August, fashion chain Zara apologized for the design of the children’s T-shirt labelled Sheriff that resembled clothes worn by Jews in Nazi concentration camps, following a social media outcry.

These were not the first time the two labels have gotten into trouble over the design of their products. Other labels too have found themselves in the thick of controversy – sometimes accidentally, but sometimes in a bid to promote sales.

Here’s a look at five other fashion controversies.

The high-street label found itself in trouble in 2007 soon after it launched handbags embroidered with Nazi-style swastikas.

A British anti-fascism group had said then that the bags were an attempt to legitimize fascism, according to Reuters.

Zara withdrew the bags, saying it did not realize the green swastikas had found their way onto some of their handbags.

An ancient symbol found in many cultures including Chinese, Japanese, Indian and Southern European, the swastika was adopted by the Nazi Party of Germany in 1920 as its emblem and Adolf Hitler said it represented the victory of the Aryan man.

The British retailer was recently mired in bad publicity following the launch of its knickers labelled ISIS, a name today associated with the Middle-Eastern terrorist group behind the mayhem in Iraq, Syria and elsewhere.

Ann Summers has apologised. The company said it had launched the product several months ago before the Muslim terrorist group became prominent. And that it was named after an Egyptian fertility goddess, according to the Daily Mail of UK. But the company has not withdrawn the product from the shelves.

The sportswear manufacturer was not prepared for the criticism that greeted its promotion of these shoes on Facebook in 2012.

The shoes were supposed to be a reboot of a classic hi-top trainer with a strap across the middle. A preview in early 2012 had generated little chatter, the Guardian said in its report. But it all changed after pictures were released on Facebook.

Critics slammed them for resembling “slave shoes”. And the company was forced to cancel its formal launch.

The clothing retailer’s launch of T-shirts featuring caricatured faces with slanting eyes and padi field hats in 2002 had Asian Americans complaining. Abercrombie & Fitch said it had poked fun at other groups too and that it was merely trying to be humourous.

But the criticism did not stop. Eventually, after receiving hundreds of complaints, the T-shirts were withdrawn from stores across the United States.

The Philadelpha-based fashion retailer had to remove its controversial Lord Ganesh socks from stores in December. The Hindus in the US had protested that putting the image of the deity on the socks was culturally insensitive.

Lord Ganesh is a much revered deity in the Hindu pantheon.

The company apologised and removed the socks. But it continued to sell T-shirts featuring an image of the elephant-headed god.