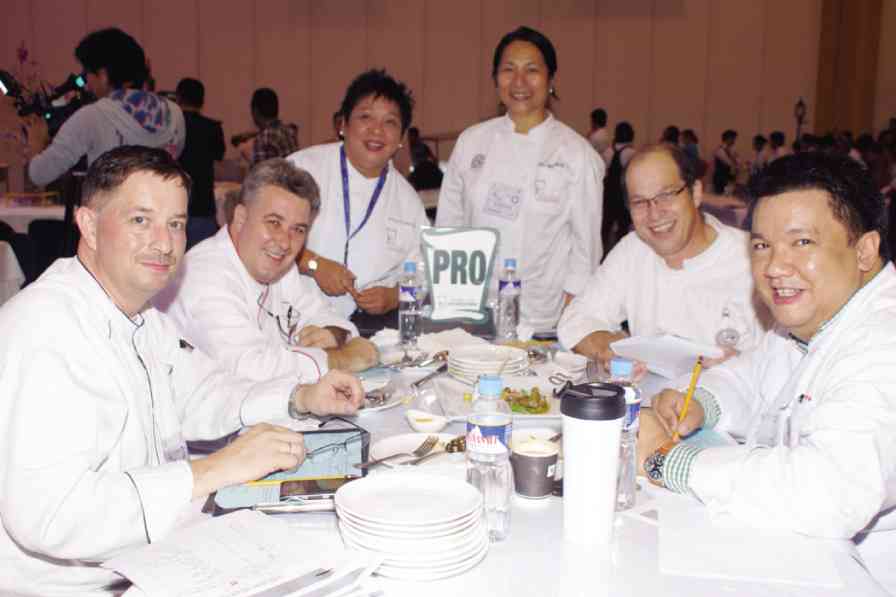 Just before the storm on Sunday, Baguio weather was glorious. The sun shone and the temperature was just cool that it didn’t require sweaters or jackets during the day. So, it didn’t seem quite like work to judge once more in the annual culinary competition of the Hotel and Restaurant Association of Baguio.

It draws contestants from hotels, restaurants and schools in Tarlac, Pangasinan, Nueva Vizcaya, Ilocos Sur, Ilocos Norte and La Union and the rest of northern Luzon.

“Chef Wars,” an on-the-spot cooking contest with a group of three doing three dishes using a required ingredient, is held in each of those regional competitions.

The idea was “cooked” up by National Food Showdown founder and mover Myrna Segismundo, a winner herself, with her team, of several culinary competitions.

The winners of professional and student divisions then come to the National Food Showdown to determine the national winner in both categories.

It is “Chef Wars” that distinguishes The National Food Showdown from the other competitions. It is on its eighth year, the only nationwide culinary event with some 40,000 TV viewers

all over the country.

For many of us invited to judge, the trip to the regions is an opportunity to learn. It is where we tell contestants our observations about flavors, tastes and efficiency so that they might improve on their skills.

They, in turn, share with the judges their regional cooking that covers their choice of ingredients, their local names and their unique procedures.

In Baguio, the rattan fruit was used by two groups as souring agent for the sinigang (sour soup) competition. The fruit has a scaly, light-yellow skin that resembles a snake’s skin. It is so sour but when placed in a broth, it somehow loses some of its taste.

Perhaps it can be grated instead of just mashed, the way green mango is used in Palawan.

Another impressive sinigang dish was a risotto-like red rice flavored with sampalok extract. It was such a creative dish that it earned a medal in its category.

It reminded me of the tinolang paella of the late chef Ed Quimson, the ginger chicken broth unmistakable in the flavor of the rice.

In Cagayan de Oro, the adobong pusit (stewed squid) had an unusual sauce called kinutil, which combines three kinds of milk—evaporated, condensed, coconut—with all-purpose cream, chopped tablea (chocolate) and seasoned with salt and pepper. They had kwek-kwek salad to accompany it, using quail eggs instead of the usual chicken egg, covered with batter, then fried.

Those made a good impression on the judges and qualified, for the students of Father Saturnino Urios University in Butuan City, as the Mindanao student entry to the national championship.

The students of Lyceum Philippines University in Laguna decided to go beyond their provincial and regional borders to cook their must ingredient—bisugo or threadfin bream. They did the tinowa, the sinigang or sour soup of Cebu, complete with puso, rice wrapped in coconut leaves which is called “hanging rice” because it dangles at food stalls waiting for buyers.

They smoked the bisugo using the technique in Quezon called kinulanong, served with garlic rice colored with achuete (annatto) and some sautéed vegetables.

Finally, the bisugo was cooked as paksiw (vinegar-stewed) with guyabano, the way it is supposedly done in San Juan, Southern Leyte (formerly Cabalian), served with kanun nga mais, or steamed corn rice. The group will represent the NCR-Calabarzon region.

Representing the Visayas are students of the University of Southern Philippines Foundation who worked with the required pork belly to make a creamy humba (braised), binagoongan

In the professional category, the finalists are from J Park Island Resort and Water Park (Visayas), Monster Kitchen Academy (Mindanao), Resorts World Manila (NCR/Calabarzon) and Le Chef of the Manor (Baguio). They were required to do classic French cooking.

Students of the University of Baguio complete the student category.

There are many other competitions in different categories during those two days, such as ensaimada, petits fours, table setting, amuse bouche and pantry chef.

All are open to everyone in any province or city. For the past years, students and professionals have been coming from Iloilo, Central and Southern Luzon.

For contestants and for more than 80 judges who are from the hospitality and food and beverage industry as well as from the media, those two days will be full and busy.