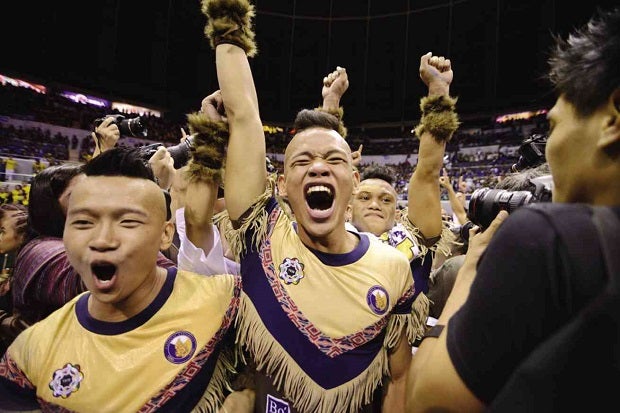 The National University cheering squad recently established its reputation as having one of the best cheerdance programs in the country.

On Sept. 14, the team won its second consecutive crown in the University Atheletic Association of the Philippines (UAAP) Cheerdance Competition. The event, one of the highlights of the UAAP season, has been a hotly contested title among participating teams.

After clinching its back-to-back victory, NU officials said that the school would hold a special event on Sept. 18 with a major announcement. The gathering was primarily to showcase a repeat performance by the champion squad, though details of the announcement remained a mystery.

Students flocked to the National University gymnasium on the eighth floor of the school building. Going to the venue was quite a struggle—the stairs and even the elevators were clogged with fans and supporters all wanting to watch the program.

Prior to the cheerdance performance, representatives from SM Cares and the SM Foundation announced that, apart from the trophy, medals and bragging rights, the NU Pep Squad received P340,000 as cash prize.

The SM Foundation has been building a thousand homes in areas affected by Supertyphoon “Yolanda”; the initial turnover is expected in November, the same month when the storm struck last year.

NU Pep Squad coach Ghicka Bernabe said the team and management had agreed to donate to cash to the SM Foundation.

NU Pep Squad manager Patricia Chunsim added that the team felt strongly for Yolanda victims and survivors because most of its members hail from provinces frequented by typhoons.

After the symbolic check of the donation was handed over to the SM Foundation, all eyes turned to the main attraction. Loud cheers welcomed the NU Pep Squad. The team didn’t disappoint with its members’ exciting, flawless performance of their winning act.

The team has proven that its victory last year was no fluke and it has shown humility in success through charity.

However, more victories mean more pressure. Yet the NU Pep Squad believes that with continued support from management, good things are in store for the school.

The NU Pep Squad’s members are not just cheerdance winners, but also champions of charity.