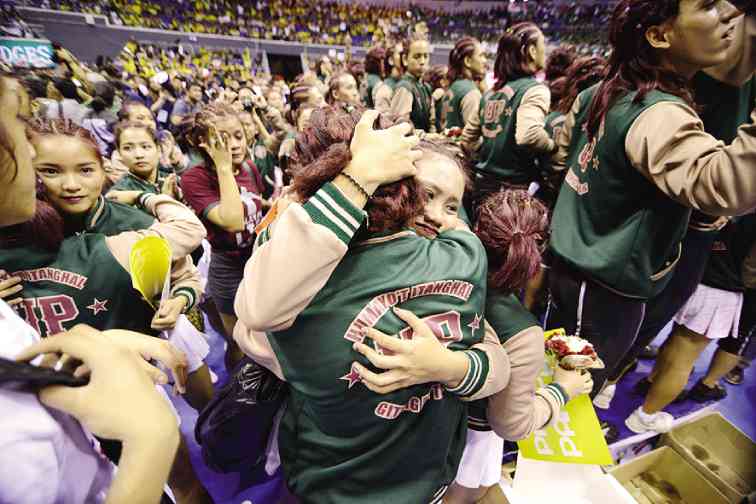 MOMENTS after being hailed first runner up. PHOTO BY MARTIN SAN DIEGO

Heart and vision from the ‘Pep Squad ng Bayan’

The UAAP Cheerdance Competition 2014 brimmed with diversity and colors. Highlighting each team’s routine was a theme that spoke of a different culture and story.

It was a thrill to watch, not just for the jaw-dropping stunts and the energetic choreography, but also for the unique experience that such an event affords.

It was easy to give an objective rundown of the proceedings, whether you were watching it live or on TV.

But joining over 20,000 fans and supporters at Smart Araneta Coliseum was an entirely different story. Even before the program started, students had been waving their school colors and screaming their team cheers. Adrenaline was at an all-time high and I could not help but ride the wave as well.

But the UP Pep Squad did not carry the school colors; instead, it waved all the other schools’ banners to recreate a rainbow or bahaghari, which symbolized UP’s theme for the competition.

Much has been said about the cheerdance competition, the teams’ routines, their themes, how they portrayed Filipino culture. Did any of them steal the other teams’ ideas? Positive and negative interpretations spread like wildfire and social media accommodated all sorts of comments.

But there was one thing we couldn’t hold back—tears welled in our eyes right after the UP Pep Squad’s six minutes on the mat.

We were teary-eyed for several reasons. One, the UP Pep Squad performed a stunning routine with powerful choreography and precise stunts. With a clean execution despite the difficulty of its act, the team proved that its training and coaching paid off to produce one of the best cheerleading techniques.

Come to think of it, the “Pep Squad ng Bayan” landed a podium finish—placing third in the Cheerleading World Championships last November, right behind powerhouses Japan and Thailand.

Two, the UAAP Cheerleading Competition is one of the rare times when we see the entire UP community united as one solid team, cheering to support one single cause. Only the UP Pep Squad has the power to do that.

And finally, the team’s routine had a cohesive theme with an insightful narrative from start to finish. It conveyed a story and highlighted its main points with conviction.

The UP Pep Squad has always been the game changer that set many trends in the cheerdance competition—from donning daring hairstyles to performing daredevil stunts and having a singular theme that runs throughout the performance.

But this year, the team ignited a vision and a statement with one simple yet powerful word—equality.

You may ask, how was it able to do it? Easy. The UP Pep Squad had heart. It had a brilliant vision that it was passionate about and that was felt in the way it performed.

Performing for the judges was not its top priority; rather, it was to tap everyone on the shoulder and remind them of something they might have already forgotten. Kasarian, lahi, kulay at antas ng buhay—lahat tayo pantay-pantay!

The UP Pep Squad interpreted its theme effectively, both during its routine and even after those six minutes. First off, roles were reversed as the girls became the lifters and the guys were the flyers. Girls danced the guys’ dances while the boys danced to Beyoncé.

When the cheerdancers let their maroon hair down during the routine, the audience could barely differentiate the girls from the guys. Now that’s breaking all sorts of gender roles!

Lastly, as everyone waited for the final results of the competition, the UP crowd passed around a rainbow flag to the audience. It first made its rounds in the UP section, then went around to the other schools as the UP community cheered on every team.

It was a touching sight.

Elevating the concept of equality was a feat bigger than any gold medal could uphold.

Years from now, people will no longer remember the teams’ dances, tosses, themes and routines. But, without a doubt, they won’t forget how a rainbow hovered inside the Bog Dome while the rain steadily poured outside.

We never thought we would be any prouder of our school. We were glad to have been proven wrong.