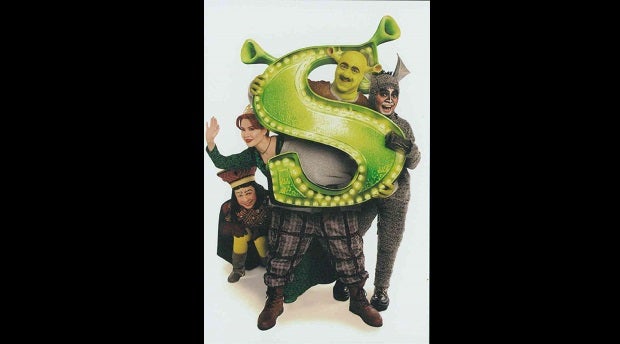 “IF YOUlike the film, you’d like the show,” says Rycharde Everley, who plays Shrek. INQSnap this page (not just the logo) to watch Shrek, Fiona andDonkey sing a snippet of “Who I’d Be.”

While on television Nyoy Volante is often seen as quiet and reserved, people close to him would tell you he is, in fact, “loud, funny and silly,” which makes him perfect for the role of Donkey in Atlantis Productions’ staging of “Shrek The Musical.”

“This is the first time I’m actually doing something that closely reflects my personality,” Volante says. “It’s not that I’m not being true on TV, but [what people will see in the show] is the real me—carefree, fun-loving.”

Written by David Lindsay-Abaire with music by Jeanine Tesori, “Shrek The Musical” is based on the 1990 children’s book “Shrek!” by William Steig and the 2001 Academy Award-winning film “Shrek.”

It tells the story of an ogre named Shrek (Rycharde Everley) who goes on a quest after his swamp is invaded by fairytale creatures banished by Lord Farquaad (Jett Pangan) from his kingdom of Duloc. On his way to the kingdom, he comes across Donkey and develops an unlikely friendship with the loudmouthed creature. Along the way, he has to rescue Princess Fiona (Shiela Valderrama-Martinez) from her dragon-guarded tower, in exchange for having the deed to his swamp from Lord Farquaad.

In preparation for his role as Donkey, Volante says that it pays that he is a fan of black comedians, especially that it was Eddie Murphy who gave Donkey’s trademark voice in the animated feature film.

“(The way black comedians talk) that’s what they’re praised for, if not envied,” Volante says. “For the show, more than the voice, what we’re trying to capture is the essence [of the character]—how the comedy comes naturally because he doesn’t know that he is funny.”

For Everley, on the other hand, more than Shrek’s appearance, gait and manner of speaking, it’s how the ogre relates to the other characters that is most challenging for him. That’s why he is thankful that he and Volante get along well on- and offstage, despite the show being their first project together.

“We have a lot of fun and it translates itself unto the stage… When we’re together, we really are good friends,” Everley says. “It helped change my interpretation of Shrek.

It’s not something I could’ve done without meeting Nyoy or Sheila.”

The Manila run of “Shrek the Musical,” directed by Bobby Garcia, will have the original Broadway and West End costume design by Tim Hatley, who won the 2009 Tony Award for Best Costume Design.

Martinez says that while the show is a guaranteed visual feast, it is also a “sweat fest.” As proof, Pangan has to bring at least four shirts during rehearsals.

“It’s physically demanding, especially for the ensemble which has to change from fairytale creatures to palace guards and back,” Martinez says. “And the energy in the show is 150 percent.”

To portray the diminutive Lord Farquaad, Pangan obviously has to be on his knees. And for that he will be wearing a special rig throughout the show. If this isn’t challenging enough, wait for his dance break.

“You need to be patient and you must stay focused. You’re a living cartoon,” Pangan says. “It requires time to make it (standing on Farquaad’s legs) look effortless.”

And playing the princess doesn’t save Martinez—who took up tap dance classes for the show—from the fast-paced costume changes. In fact, one scene would have her change costumes—and even makeup—in 64 seconds.

Martinez teases that one should watch the show to believe the “magic” that will unfold onstage. More intriguing is the dragon who has been Princess Fiona’s guardian for the past 20 years. While it may be an economical version of its foreign counterparts, the cast say that it is no less fiery and intricate in detail.

As the show’s story progresses, one would learn that the four main characters in “Shrek” and the fairytale creatures we’ve grown to love or hate—from Pinocchio to the Wicked Witch— actually have deep-seated issues.

Says Pangan: “That’s what the show is trying to tell people—that at a certain point in our life, we are all ogres… It’s a matter of being happy with what you’re given.”

The heart of the show, says Everley, is really about acceptance and being happy with who you are.