Jay, Michael and Chris Aldeguer: What sets them apart from other entrepreneurs | Inquirer Lifestyle ❮ ❯ 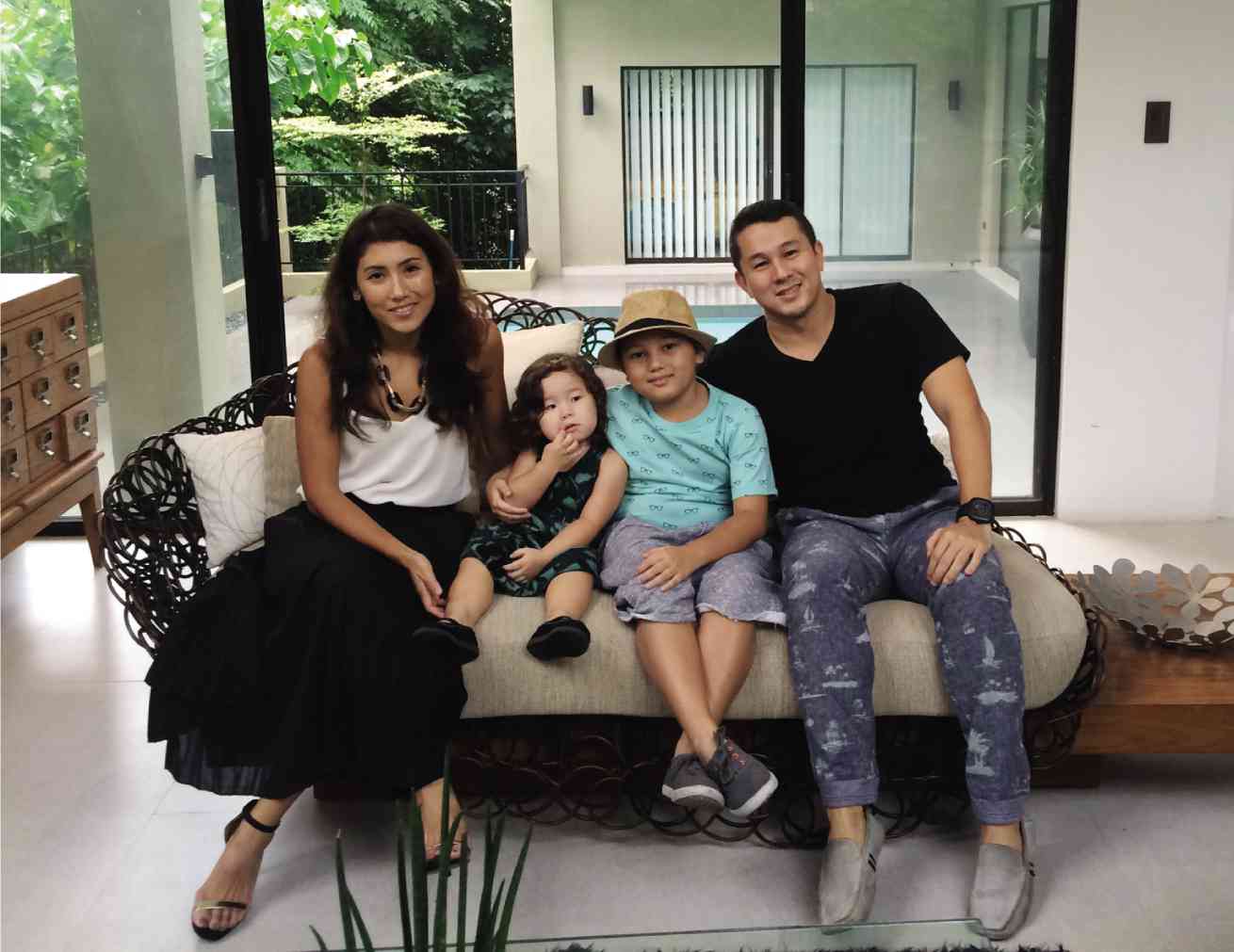 NIA AND Chris Aldeguer with their kids Sabrina and Finn

Jay, Michael and Chris Aldeguer: What sets them apart from other entrepreneurs

The eldest, Jay, is the president of The Islands Group of Companies, the first and largest integrated tourism and travel brand in the country. He could be the face of entrepreneurship of Cebu, with over a handful of entrepreneurship awards to his name.

He’s the go-to guy for motivational speeches on pursuing your entrepreneurial goals as well as for civic leaders who need a link to the business community.

He’s also the darling of Cebu’s business writers who need fast and up-to-date information on the tourism and retail industry to meet their daily deadlines.

What makes him an inspiring businessman is his ability to remake existing concepts—souvenirs, hotels, island hopping, pasalubong—into cool, attractive brands that still have that homegrown feel but with a first-rate level of professionalism.

None of his ideas are original, and that’s exactly why they work. He takes something that’s everywhere, so obviously, the demand is there, but he makes it much better.

His tourism-based empire was born after he came back to the Philippines from a backpacking trip around Europe. On that trip he collected T-shirts and mementos from each place he visited.

He wanted to do the same thing here, but he couldn’t find attractive souvenirs. All the souvenirs back then were ethnic-looking and made of wood, which he felt didn’t capture and reflect the bright and sunny vibe of the tropics.

That was how his first baby, Islands Souvenirs, was born—a venture to fill the need for well-designed souvenirs.

From a bamboo cart

It started as a small bamboo cart selling colorful T-shirts and small keepsakes at White Gold, a local department store, in 1992. Because it did so well, after six months, the store gave him a 60-square-meter space.

Today he has more than 110 branches in the country.

He has done the same ingenious spin with Islands Banca Cruises offering sea and sand worshippers an alternative to the uh-oh-this-thing-won’t-make-it-to-shore bancas that have been around for ages.

His well-painted bancas are clean with comfy cushions, beanbags, and iPod docks on board, and even butlers, masseuses and bartenders upon request.

His value-chic Islands Stay Hotels are popping up in convenient urban locations—we love how the rooms are just like T-shirt sizes, available in small, medium, large and extra large—as are his Islands Pasalubong Centers, one-stop shops for everything, from Cebuano delicacies packed for travel to freshly cooked Mandaue bibingka.

Obviously, it runs in the family.

Michael is the president of ALA Boxing Promotions, the biggest boxing promotions company in Asia, and the only one with a license to stage a fight in the US.

It is also the only one in the Philippines to be associated with Top Rank and Oscar de la Hoya’s Golden Boy Promotions, two of the biggest boxing promoters in the world.

He’s the guy you see in the ring before the fight starts, wearing a suit and sunglasses. He is proud to have come back from Pinoy Pride 27, his group’s first international fight last week, in Dubai, with a sold-out stadium of 2,600 boxing fans.

Pinoy Pride 28 is happening in Cebu in November when one of his best fighters, Donnie Nietes—if he wins—will break Flash Elorde’s seven-year record as the longest-reigning world champion.

ALA stands for their father Antonio L. Aldeguer, long considered the godfather of boxing in the Philippines. He started the venture in 1985 as a hobby to train out-of-school boys and aspiring boxers.

“For my dad, boxing was always a hobby. He didn’t enjoy the business side of it. He just really loved the sport. I came in to create an enterprise for ALA to grow, and in a way, for my dad to be able to box and train more,” Michael says.

Antonio or Bidoy, as he is affectionately referred to, was also an entrepreneur, as was his wife, Lou.

In 1975, the couple started a garment manufacturing company called Loalde. It’s a combination of “Lou” and “Aldeguer.”

Antonio oversaw the production, and Lou, the design and sourcing of fabrics.

As the retail industry grew, Lou saw the need to shift from manufacturing to fashion retail to keep up with the times.

Her youngest son, Chris, now the president of Loalde, joined the company in 1998, and together, they have expanded the classic brand’s retail outlets to 14 branches throughout the country.

“We’re really happy that despite all the international brands that have come in the past few years, Loalde’s sales have been going up,” Chris says.

His wife, Nia, an architect, is the creative director of Loalde, so it really is a family affair.

It’s not very common to have a family of entrepreneurs, each of whom does his own thing.

“We were always encouraged to do what we wanted,” Jay says. “Our parents have always created an environment of support. Even if we had crazy ideas growing up, they always allowed us to spread our wings, so to speak.”

Chris had grown up knowing he wanted to be a professional athlete. “It’s the only thing I wanted to do. I’ve played basketball all my life, and I was always in my school varsity team, from grade school all the way to college. When I graduated, I would still join my college team’s practice sessions. At around the same time, I ventured into triathlons and boxing, but I knew that if I wanted to succeed as an athlete, I had to choose one sport.”

He adds: “Since I’m a very individual person, I decided to focus on triathlons. So for about two years, I took some time off work to train in Australia and New Zealand. I was part of the national team in 2002 and 2003, where I would average about one triathlon a month, both locally and in international races like in Singapore, Hong Kong, Mexico, New Zealand and Australia.

“I was in it to challenge myself and bring out the best in me. After scratching the itch of doing sports competitively, I knew it was time to take on bigger challenges and that was to run Loalde.”

Jay explains how they were brought up. “Another thing our parents really instilled in us is the value of hard work. We grew up watching them work almost 24/7. When they started Loalde, they moved us out of our room to put in the sewing machines!”

He recalls: “When I look back, it was very inspiring how our mom was always very career-oriented even if it wasn’t the norm in her generation. It’s amazing how she would go to Manila three times a week to buy fabric in Divisoria but be back home by the afternoon of the same day every time.”

Michael says, “I was really into boxing as a kid and Chris was the one who would go with our mom to shop for fabric in Hong Kong, and we both ended up doing what we were most interested in.”

“I have three kids,” he continues, “Isabella is 16, she is really into art. She’s considered a kind of child prodigy; she’s been drawing anime since she was 5 and she’s been drawing like an adult since she was 6. Sofia, 14, is into dancing and the performing arts. Maybe she got it from my aunts, the Aldeguer Sisters. My son, Franco, is 11, and he’s really into boxing.”

Jay’s older kids are into business and fashion, while his youngest child, Ariana, 13, is a student at Ateneo de Cebu.

The eldest, Anton, 21, has just started his company called Go Rage, a line of quirky and tie-dyed socks.

“He wanted to be a stand-up comic,” Jay says fondly. “My daughter Andrea is 19, and she is working part-time at Loalde. She’s known since she was 6 that she wanted to be in fashion.”

“It’s really too early to tell what my 9-year-old son Finn and my 2-year-old daughter Sabrina want to be,” Chris says, laughing, “but the one thing I noticed among our kids and my nieces and nephews is that the girls are all very domineering while the boys are easy to handle.”

“Our parents are both very strong-willed, but they couldn’t really tell us what to do because we are all very bull-headed too,” Jay chimes in.

The ties that bind the Aldeguer family are simple, according to Chris: “It’s the love of basketball and boxing. Every time there is a big game or an interesting fight on TV, we’ll all gather in our parents’ house to watch.”

“Or Sunday lunches,” Jay reveals. “Our mom asks us individually what we want to eat for Sunday lunch in their place every week, and without fail, it’s always a feast good for 30.”

Jay and Chris share a passion for sports cars and are both with the Performance and Classic Car Enthusiasts Cebu, a by-invitation car club whose members enjoy driving their vintage sports cars around Cebu and the neighboring islands.

Michael has been a hobbyist dog breeder for golden retrievers since 1992 when he started Goldenhills Kennel, now considered one of the top breeders of champion goldens that are of the same lineage as world champions from the US and Canada.

Chips off the old block, Jay, Michael and Chris show that the ties that bind are both in the blood and beyond it.