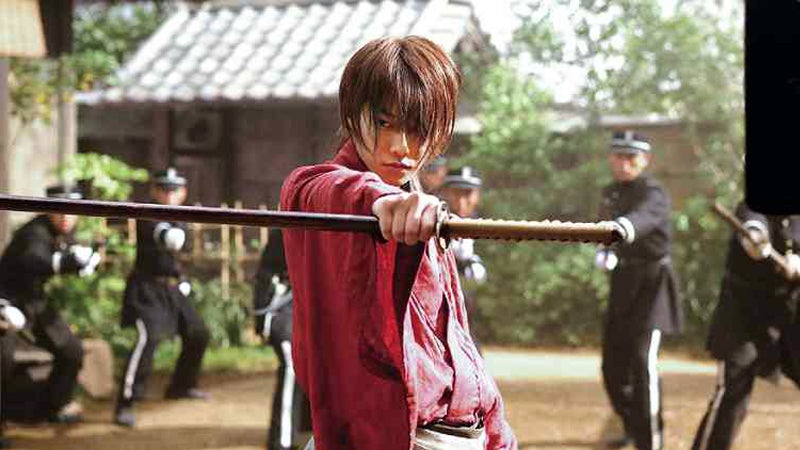 The second and last part of the “Rurouni Kenshin” sequel will open this week in the Philippines, and by the time it will have ended its run, it may be safe to say that the samurai movie as a global cinema genre will have been restored. “The Legend Ends” just won’t have its way.

Firmly etched more than ever in the popular imagination is the figure of Himura Kenshin, formerly known as the notorious assassin Hitokiri Battosai, who has walked from the Bakumatsu war, which ended the late Tokugawa Shogunate and ushered in the Meiji period, a changed man, a man of peace. Repentant for his killings, he now provides protection to the needy, but, carrying a reverse-blade sword, the cutting edge pointed at himself, vows not to kill anymore. Only the two scars that form a cross on his left cheek, partly hidden by his long hair, mark his terribly violent past.

The last part of the movie sequel, which is based on the very popular manga comics and the TV animé adaptation, brings us to the beginnings of the “Legend.” In the last sequence of “Rurouni Kenshin: Kyoto Inferno,” Kenshin Himura (Takoro Satoh) is beached on the shore after failing to rescue Kaoru Kamiya (Emi Takei) aboard Shishio’s battleship heading to Tokyo and seeking to destroy the new government. The unconscious “rurouni” or wanderer, is picked up by a grim-looking stranger, who, in “Legend Ends,” turns out to be Hiko Seijuro (Fukuyama Masaharu), Kenshin’s cynical former mentor and “Master.”

In Kenshin’s dream and delirium, the viewer is brought back to the past, when as a boy named Shinta, he buries the enslavers and bandits from whom he has been rescued by Seijuro. The boy’s compassion even to those who have treated him cruelly impresses Seijuro, who changes his name to Kenshin, a portmanteau of the Japanese words “modesty” and “truth.” The Master promises to train and make him a master swordsman.

When he wakes up, Kenshin realizes he will need more than the usual dose of modesty, truth, and warrior skill to defeat Shishio. He asks the Master to teach him the ultimate technique. A cynical and hard taskmaster, Seijuro calls Kenshin his “idiot apprentice” and ridicules his new life as a wandering samurai carrying a reverse-blade sword, seeking to atone for his bloody past. But, of course, Seijuro relents to his favorite student’s request only after provoking him to several vicious fights and in true Zen fashion, forcing him to do some deep contemplation.

When Kenshin finally masters the technique, he proceeds to look for his quarry only to find out that Shishio has forged an alliance with the new home minister who has been compelled to put the rurouni on the wanted list, making him the new government’s most wanted man. The roles of the two classic adversaries have been reversed: the hunter becomes the hunted, and Kenshin finds himself owning up to his fiendish crimes in the past as an assassin and being sentenced for execution—if only to get to Shishio.

But if beheaded, how could he stop the mad man?

Of course, like all samurai movies, “Legend” ends in a duel to the death of the two swordsmen. Needless to say, the fight is a spectacle to end all fight spectacles.

Directed by Keishi Ohtomo, the “Rurouni Kenshin” movies are fabulous spectacles that deny itself the usual Hollywood gloss and over-the-top CDG tricks to achieve its epic look and proportion. It instead relies on good old classic filmmaking.

The production design and art direction are first-rate. The two-part sequel, for instance, begins and ends in spring, and the production so evokes beautifully the season that viewers may be driven to tearful exaltation. The “Rurouni” movies are in the tradition of classic Japanese photography.

Moreover, the production is driven by a gripping storyline and very compelling characters. For example, Kenshin and Shishio are totally engaging and, in their own terms of twisted motivation and mission, credible characters.

Takeru Sato, the 25-year-old actor who plays Kenshin brilliantly, achieves an apotheosis of sorts in “Legend.” Uncannily having manga-like features—well-formed big eyes and perfect lips as well as well-chiseled cheeks—he has the brooding looks of a warrior. His slight frame disguises a dancer’s grace and fierceness. Sato becomes Kenshin and Kenshin becomes Sato.

But what’s best about the “Rurouni” movies is that they may yet restore the humanism that is integral to viewer’s former enjoyment of samurai movies.

Even before James Clavell’s 1975 bestselling novel, “Shogun,” the samurai figure had been part of global popular culture via, for example, Akira Kurosawa’s “Yojimbo” and the “ronin” movies of the 1960s.

Around the same time Kurosawa made “Yojimbo,” a movie series on “Zatoichi,” the blind masseuse and swordsman, also started to run, based on the popular fiction of Kan Shimozowa.

Not too well known to audiences outside of Japan, the “Zatoichi” franchise ran for a quarter of a century until the 1980s, proof of how the samurai figure had captured the Japanese popular imagination.

This was the same “Zatoichi” that was revived by actor-director Takeshi Kitano in his highly successful movie of the same title in 2003, which won him the best director award in the Venice Film Festival, the same festival that “discovered” Kurosawa in the 1950s and introduced Japanese cinema—and the samurai genre—to the world.

But Kitano’s “Zatoichi” failed to restore the samurai genre exactly because of its lack of humanism. As against the humor of the original series on the blind swordsman, Kitano’s version is completely dark and humorless. Even if Kitano is a comedian, the only humor he could endow the character with is the humor of a sexton or a mortician. 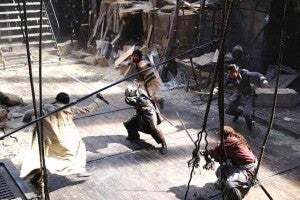 Kitano has been compared to Quentin Tarantino and the comparison is apt. Both celebrate violence for the sake of violence. Both draw humor from violence. Both in the end are corruptions of modernity.

All of these 20th-century representations of the ancient samurai draw from Miyamoto Musashi, himself a brilliant warrior swordsman who lived in 17th-century Japan and was the author of “The Book of the Five Rings,” a book on the martial arts.

The son of a country samurai, Musashi was, like Kenshin, left for dead on the battlefield but was rescued by a Zen priest who trained in mind and discipline. He later embarked on a journey to become the greatest swordsman of his time.

The Japanese fictionist Eiji Yoshikawa wrote the “Musashi” cycle of novels in the 1930s and introduced the warrior swordsman to 20th-century popular culture.

“Rurouni Kenshin” provides an alternative to the Kitano samurai, who’s really Shishio without the third-degree burn. Shishio and Kitano are modern figures, products of modern consciousness, which gives rise to the the oppositional self that however becomes itself an ideological construct, a counter-revolutionary forever opposed to anything just for the sake of opposition.

Both seek to destroy whatever new order there is, not to restore the old, vanished world, but to foster what amounts to a post-culture, a world bereft of humanism.

Standing against Shishio’s megalomania seeking to bring the world to the abyss, is the peregrine Kenshin, a figure of grace and beauty in the midst of violence, a modest but powerful figure of truth and compassion.