How I survived my parents’ separation | Lifestyle.INQ ❮ ❯ 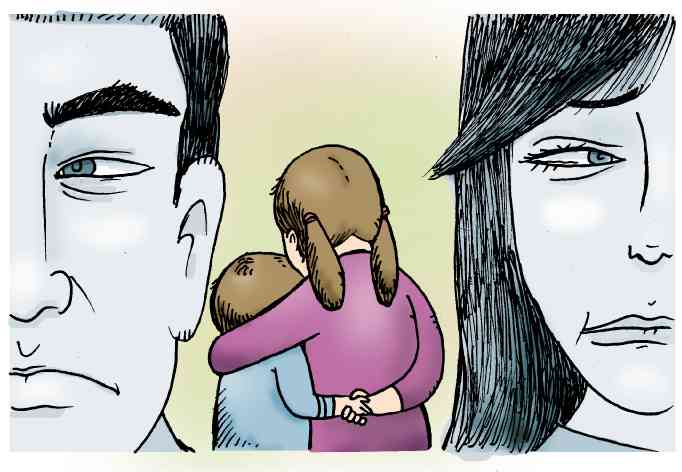 How I survived my parents’ separation

‘I know the only reason you’ve been staying is so your kids wouldn’t have to say they come from a broken home. But a broken home is better than seeing you fight all the time. If you can’t stand it anymore, leave,” I told my mother one day.

When my father sat us down for a serious conversation, I knew it was really happening. He had never been the heart-to-heart talk type. “It doesn’t mean we don’t love you,” he said, as tears rolled down my cheeks and my 8-year-old brother Powie stared at the floor.

We did leave—my mother, brother and I moved in with my maternal grandparents. Our weekdays were spent there; on weekends my brother and I went to our old house with our father.

It was a season of serious conversations. On one of those weekends, my father’s sister, Tita Aggie, sat me down and said: “This is their problem, not yours. You have to live your own life. If you decide to rebel because of this, ikaw ang talo.”

There is no manual for kids whose parents just separated. I recognized that Tita Aggie’s words were as close as I was going to get, so I took them to heart.

But it was easier on some years than others, the years when my parents were still friendly with each other, the years without lawsuits.

One night, about a month after the separation, I was doing my homework when I noticed that my brother was crying. That was the first time he became emotional about the split. I grabbed him and hugged him tight. That’s when I realized that I didn’t need to be strong just for myself—I also had to be strong for my brother.

The other adults in our lives provided stability, too—our grandparents who showered us with love and concern and who continued to love and be kind to their in-laws (I am thankful to them for not fanning the flames); our aunts and uncles who treated us like before (I will always be grateful that they didn’t feel the need to handle us with kid gloves; it gave us a sense of normalcy).

Switching houses every few days wasn’t easy. We were constantly forgetting things we needed for school at the other house, but, as strange as it sounds, the separation brought forth positive things, too.

Their fighting stopped. And while my parents were apart, I got to know them better—seeing and understanding them as people and not just as authority figures.

I learned to appreciate my father’s taste in music and movies. My mother and I talked like we were friends (and we would sing along to No Doubt in the car). I spent a lot of time laughing with them on various occasions.

At school, things were normal for me. After recollections and retreats, classmates would always tell me how surprised they were that I came from a broken home. “But you seem so happy,” they said.

And I really was. I realized early on that your situation at home should never define you or your happiness.

Over the years, I’ve seen people handle their parents’ separation in different ways. Some choose to keep blaming their folks for their own problems. Others exploit the situation to their advantage, drawing on the parents’ guilt to get what they want. Others seem to see the split as a free pass for bad behavior.

But it never crossed my mind to do those things.

It cannot be denied that the separation changed my life. I had to decide who to spend holidays with, I didn’t go to my college graduation because I didn’t want to choose who to invite. But I was never angry about it.

I understood that the separation was necessary. I had no “Parent Trap” fantasies—I never wished that they would get back together. (In fact, the thought makes me shudder.) I knew they had made the right decision to split up and I was glad, and I am glad, they did it.

I did have questions, of course. Is the separation the reason getting married has never been my priority? Is it why I’m so good at distancing myself and why I have an almost obsessive need for peace? How different would I have turned out, if my parents had stayed together? Would I have had healthier relationships? I don’t know. And the truth is, I don’t think about it too much.

Instead, I choose to focus on questions that I can answer. Like, what do I want to do with my life? Is my brother okay? How can I make the people around me happy?

And I have some answers. I know that my parents’ separation made me stronger. I know that it solidified my bond with my brother. The split made me grow up—teaching me to choose my battles, to be independent, to always see the positive side of things, to handle stress with relative ease, to take responsibility for my actions, to be accountable for my own joy, to love without fear even though I know things could end.

I also learned the importance of having a sense of humor.

I have kids very close to me who were going through something similar and, channeling my very wise Tita Aggie, I told them the words that helped me for over two decades: Your parents’ problems aren’t your problems. Live your own life. And love your siblings.

My broken home didn’t break me. Yours shouldn’t tear you apart either.