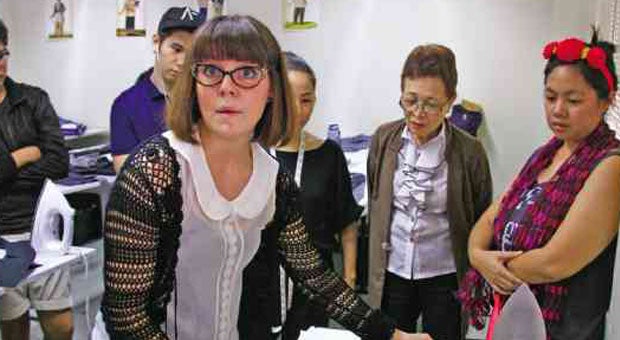 What is British bespoke tailoring, and how does it compare with existing forms of tailoring in the Philippines? How can local designers apply this centuries-old tradition of making men’s wear not only for three-piece suits, but also for the barong?

An initial batch of 12 students are finding out for themselves, as Slim’s Fashion and Arts School is three weeks away from concluding an intensive three-month pilot course on British bespoke tailoring under Victoria Townsend, a British teacher and seasoned master cutter from Savile Row.

Savile Row is a world-famous street in London where many of the best master cutters, tailors and tailoring houses are. It’s also where rich, discriminating men go to for expensive made-to-measure suits that start anywhere from £4,000 to £5,000.

Townsend, who’s on leave as one of Richard James’ master cutters, also considers the place as an institution.

Despite being in the tailoring business for almost 25 years now, James is one of Savile Row’s younger tailors, said Townsend. After all, the street and the tradition it has spawned date back to the 18th century.

“It’s just another place in London where all the best tailors are,” she said. “But for me personally, it’s the technique and practices that go along with it that makes it an institution.”

Townsend is also on leave from Newham College, a South London-based school where she also teaches her brand of tailoring. It’s the same college that Alexander McQueen once attended before initially embarking on a designing career on Savile Row.

A typical short course at Slim’s runs thrice a week for six months. But since Townsend and the school agreed to shorten the pilot program’s run to three months, she has been conducting six-hour classes five days a week since early August at Slims’ Makati building.

the family-owned school several years ago.

“I told Sandy that if I revive it, I wanted to bring it to the highest level possible,” Mark Higgins said.

That meant teaching students how to make bespoke suits the way they do them in Savile Row, where 80 percent of the garments, down to the buttonholes, armholes and various interfacings used to reinforce the suit, are said to be done by hand.

“Imagine, they hardly use sewing machines on Savile Row,” he said. “If ever they do, it’s limited to the side seams.”

After doing a bespoke suit by learning techniques that Higgins describes as the “Mercedes-Benz of garment-making,” graduating students “could make a shirt and a pair of pajamas and shorts blindfolded,” he said.

That’s probably not an exaggeration. “Rock of eye,” a tailoring term among pros on Savile Row, enable them to “tune yourself in” to know certain distances within a client’s body, said Townsend.

There’s no need to unlearn what some of the current students have learned before, say, in dressmaking or even conventional tailoring, because British bespoke tailoring is a very precise and unique art form in and of itself.

Although it helps to have a rudimentary knowledge of sewing and cutting, it’s not necessary as long as the student is interested and possesses an aptitude for garment manipulation.

During the first few weeks of the course, for instance, Townsend started by teaching her students various techniques in hand stitching.

They even used special thimbles because the needle they were using tended to “backfire” into their fingers while they were stitching together thick layers of suiting fabrics, said Higgins.

Only after they had done enough stitching, including doing numerous French buttonholes, were they asked to move on to their first project: a jacket. Before the course ends, they would have also done a shirt, pair of pants, vest and barong.

“Bespoke is different in a way because it’s specially made for an individual,” said Townsend. “Made-to-measure dresses are also made for individuals. But when a bespoke garment is being pieced together, it’s built piece by piece rather than starting everything with a paper pattern.”

In Townsend’s book, British bespoke tailoring is the best, but traditional Italian tailoring is a “close runner-up.” There’s no point in comparing the two, however, because their practitioners resort to different hand skills and techniques.

To realize his vision to revive tailoring at Slim’s, which his mother and her two sisters established in 1960 with a homegrown curriculum based on their actual practice, Higgins consulted with the British Council in Manila late last year.

Those behind its education exchange program endorsed Higgins to people at Newham College. He flew to London earlier this year to present his case. Newham, in turn, sent Townsend

to Manila soon after to assess the program’s viability.

“I came here initially to establish whether there are resources available to make the course run and work efficiently,” said Townsend. “Mark and Sandy showed me around and I fell in love with the place. I was convinced that it could be done.”

During Townsend’s week-long visit to Manila, she and Higgins drew up and fine-tuned the course syllabus. Instead of duplicating everything she teaches in London, Townsend deferred to her host’s knowledge on certain nuances and requirements unique and relevant to Filipinos.

She returned to London in February and flew back to Manila in late July to begin teaching the course.

Apart from suits, he feels that the barong should also be given the attention it deserves. There’s always a steady demand for it among men, even foreigners, in business and diplomatic circles.

“The barong is unique for someone like Victoria,” said Higgins. “It’s technically a shirt, but the shirt’s hemline is cut flat. Not in a barong, which you need to cut in a certain way, especially for more mature men with irregular figures.”

He also suggested that Townsend also teach students how to make their own shoulder pads. While these components are readily available to tailors in London, there are no decent ready-made shoulder pads sold in Manila.

Since a teacher can attend to no more than 12 students, lest the quality of her teaching suffers, Slim’s had to turn away a number of interested applicants.

But Higgins promises to accommodate them when the course is offered again in January. Instead of three months, it would run like a regular six-month, thrice-a-week course. Because she won’t be here the entire time, Townsend has also started training Filipino teachers to teach the course.

Most of the students who were accepted to Slims’ pilot class have either started running their own garment and couture businesses or have taken earlier courses at Slim’s. Both Townsend and Higgins are happy to report that no one has so far dropped out from the pilot class.

“You have to understand that this is a serious and in-depth course,” said Higgins. “It’s not something that you enroll your sastre so you could open a typical tailoring shop after.”

The lessons may be technical, but the thrust is designed to appeal to and stimulate a designer’s mind. On a practical note, teaching the designer how to cut and sew suits at this level liberates him from being at the mercy of his master cutters.

“In every art form, you have to master the rules first before you can even begin breaking them,” said Higgins. “It also applies to tailoring. These are the very foundations that would guide you in your profession as a designer.”

And as the Philippine economy continues to boom, Higgins also sees a potential market for bespoke suits in the country. Because the “pagawa (made-to-measure) culture” is so ingrained among Filipinos, those with money wouldn’t mind paying the price for a beautiful made-to-measure suit.

“Yes, the likes of YSL, Zegna, Brioni and even McQueen and Vivienne Westwood offer beautiful suits that fit well,” he said. “But they’re still off-the-rack. We all know that the human body is not perfect. The bespoke suit takes into consideration every part of your body. It’s a suit specially made just for you.”