How to make a puzzle | Lifestyle.INQ ❮ ❯ How to make a puzzle 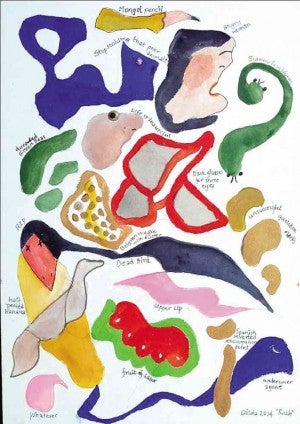 With a pencil, draw any form without thinking. Draw forms continuously one after the other right up or inside out. It doesn’t have to make sense. A puzzle is also meant to puzzle you.

Next, look at your mess. Imagine figures emerging out of that chaos. You will find shapes that appeal to you. Color them. The images don’t have to blend with one another.

(Use dried-up watercolor by biting on the hardened tubes or pounding them with the blunt end of big scissors. In the worst-case scenario, cut tube in two and you’ll find some caked color inside. Or you can use cheap children’s poster paint.)

I advise these stringent measures because you must have no illusions about selling your puzzle in any art tiangge. For me it’s just a one-time use—for Inquirer Lifestyle. Put captions so people can figure out what they are.

Figures in the maze

Here are the following figures I discovered in the maze I made:

Top: Yellow Mongol pencil. From left: Blue cat or skunk scolding an angry woman; next is the green Siamese twins worm that has freaked out the dame.

Slashing the middle of the page is a black bird that is dead. (We can’t do anything about that). The bird’s orange bill is resting on a half-peeled lacatan banana. The pink upper lip below it belongs to no one.

Down below is a slice of watermelon; left corner is a pink nothing; then a blue Chinese spy slithering about in disputed Scarborough Shoal. Dividing the blue creature is an inverted exclamation point used in Spanish expressions like “Hola” (the upside down one is in the beginning of the word and the upright one at the end).

Now the puzzle is done. Don’t feel too bad if nobody likes it. Most European master painters almost starved to death.