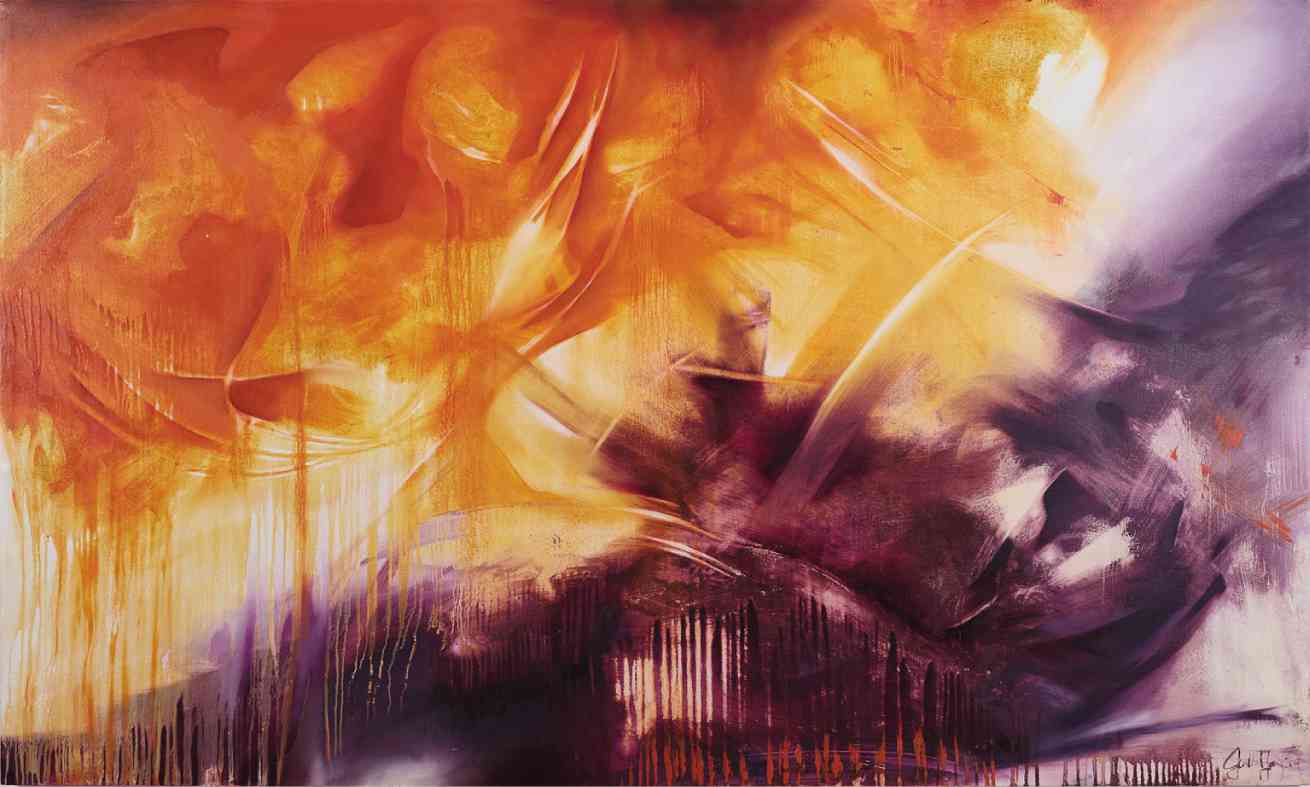 Young artist Jewelle Yeung has been painting for five years but only recently had the chance to mount a local exhibit of her pieces.

Her first one-woman exhibit in 856 G Gallery in Cebu opened earlier this month and sold out almost immediately. By the end of the evening, only two of the 16 paintings on display were still for sale.

She downplays her commercial success, saying only that her passion has really been for painting. Yeung graduated with a bachelor’s degree in Fashion Design and Technology from London’s University of the Arts. She then went on to get her master’s degree in Fine Art (oil painting) at The City and Guilds of London Art School.

After stints working at Hussein Chalayan and Puma Black Label, Yeung decided to focus on her passion. She has since exhibited in galleries in New York and Hong Kong. For her local debut, she came up with large-scale abstract pieces in a number of themes including icy landscapes, galloping horses, and a tangle of cords.

“I am fascinated by dreams and how our mind processes pieces of reality into our subconscious, mixing it all up, and finding its way back to our conscious mind again. I like to bring these things out in my work,” Yeung said in a statement.

Although this is her first time to exhibit locally, her commissioned work hangs in private homes and offices as well as in the public areas of the Solaire Resort & Casino. “I did 12 pieces for Solaire. They were mixed in sizes, a couple of large pieces and the rest were mid-range.”

Her style of painting is non-threatening; they draw the viewer to come and look closer. “I tend to change my style of painting from time to time but I always go back to abstract as I feel this is what brings out emotion the strongest.”

Of the pieces on display in 856 G Gallery, the ones that got people talking were those in her “Red Thread” series. The large canvases have masses of knotted and tangled cords stretching from one end to the other.

“I started this series a couple of years ago but only finished them recently. It is based on an ancient Chinese legend that says there is an invisible red cord tied around the ankles of those who are destined to meet one another in a certain situation or to help each other in a certain way. The thread ‘may stretch or tangle but never break.’ I thought this was a beautiful theory and something I quite believe in,” she said.

Yeung uses flat-faced paintbrushes and pallet knives to create her pieces. She started with small canvases but went on to mid- and large-scale canvases when she “decided to let loose, mixing the controlled with the uncontrolled. I guess that’s where I am now, a fusion of both.”

Unlike other artists who work from a sketch, Yeung paints directly on the canvas “using whatever energy I have at that moment.” She takes a different approach when it comes to her more figurative pieces. “I’ll have a rough idea and then create quick studies to get an idea of composition before starting the canvas.”

Yeung is fortunate to do a lot of commissioned work; 70 percent of her output is commissioned. She says that her clients are drawn to a particular style or color theme she has done in the past. “However, they leave me to create whatever I want based on that style.” She has a number of ongoing projects for several Cebu-based properties including Alicia Hotel, the family-owned Kandaya Resort, and MSY Tower, but is looking forward to doing another show in New York next year.