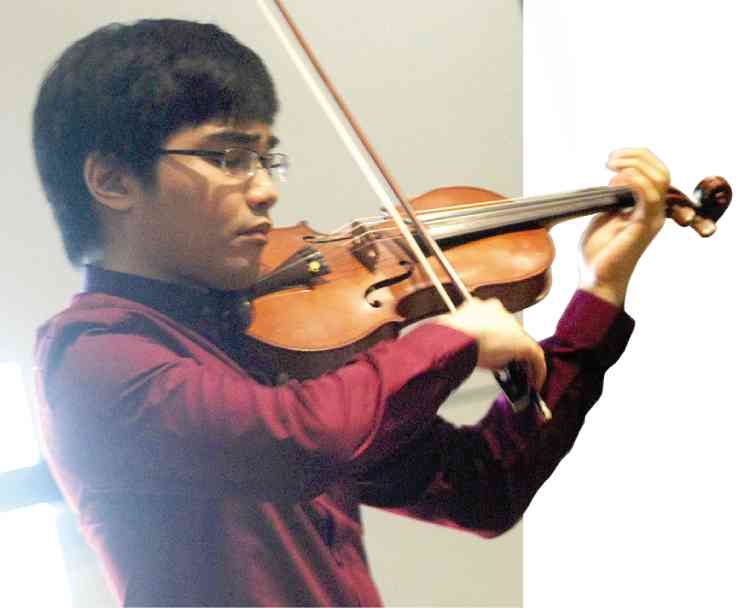 ‘Classical music is not elitist’

Joaquin Maria “Chino” S. Gutierrez was barely out of his toddler years, a mere child at 4, when he first pleaded his case to his parents: He wanted them to buy him a violin.

He was enraptured by the violin, amazed at how much a single musical instrument can shift its aching, melancholic strains into popping sounds of castanets and bells. The little boy didn’t know if he was going to be any good at it. All he knew was that he wanted one—so bad.

And how he obsessed about it, constantly reminding his parents whenever he could until one day, three years later, at 7, they finally relented.

“The violin has a very wide range of emotions. It can imitate the human voice, it can cry, it can shout, it can beseech, it can lament, and it can produce sounds like castanets, birds and bells. It was a very magical instrument for me,” Gutierrez, now 24, said in an interview with the Inquirer.

Gutierrez recalled being so happy he insisted, much to his classmates’ dismay, on playing a new piece each week in class. This feverish passion earned him brownie points from his teachers, and a mild annoyance from his classmates.

“I was a little brat back then. I refused to sit down until I had played my piece,” he said, laughing.

His parents placed him under the tutelage the Juilliard-trained, world-renowned violinist Alfonso “Coke” Bolipata. A year later, at 8, Gutierrez was already doing difficult college pieces. At 9, he had given his first full recital; and at 10 he made his orchestral debut, playing Edouard Lalo’s “Symphonie espagnole,” at the Cultural Center of the Philippines, under the baton of Chino Toledo.

He placed second in the National Music Competition for Young Artists at 9, but snagged First Prize at 10. At 16, Gutierrez was hailed as a young virtuoso.

Gutierrez was the guest of honor at Nene Leonor’s birthday merienda bash last week at the North Forbes Park Pavilion in Makati. Leonor, former president of the Friends for Cultural Concerns of the Philippines and one of Gutierrez’s fervent patrons, requested her guests to make a donation to the young man’s educational funds abroad in lieu of gifts.

His educational journey abroad began at 13. After completing his freshman year at the Philippine Science High School, Gutierrez left for Germany. He had earlier auditioned at the precollege division of the prestigious Hochschule für Musik und Theater München (University of Music and Performing Arts Munich), and received positive feedback.

He completed high school in Munich so he could simultaneously study violin at the university under the pedagogue Jens Ellerman, whose protégés included world-class violinists Midori Goto, Nigel Kennedy and Christian Tetzlaff.

Unfortunately, a change of policy in the German Embassy deemed he must come back home prematurely at 16. In 2010 he tried out for college again, passed the test, but ended up spending the next two years getting by on grants.

When the time came for him to renew his student visa, his family couldn’t raise the funds anymore. The German law required an escrow of 8,000 euros for student visa applications.

Gutierrez found himself back in Manila in 2012, teaching high-school algebra and trigonometry, and devoting the rest of his time mentoring young violin students and prepping for fundraiser concerts. (The genius Gutierrez also reaped success in math, science and languages while studying violin in Germany. He won at 14, in Bavaria, the championship title in the state math competition, and was also handpicked to co-author a book on etymology in five languages.)

His concert last year, “Passion,” an exploration of the different shades of passion with noted pianist Corazon Pineda Kabayao, was so well-received they had to restage it three times, he said. He also had a repeat concert, “Revelry,” from 2012, after receiving several requests from fans.

In time, Gutierrez was able to raise enough funds to support his scholarship abroad. Today, he is in the country for his summer break while continuously doing concerts to raise more funds.

“I want to break down the elitist notion of classical music. You don’t need a degree to understand classical music. It’s something that has always been written to express very universal human emotions,” he said.

There have been many young people in his concerts, he said, with a good number of them watching a classical concert for the first time. This inspires him to pursue one of his life goals— to make classical music accessible to every Filipino.

“Classical music speaks to the soul. It speaks directly to who is inside of us without using words or logic. You lose yourself in music. In that sense it is not at all elitist, but rather it is just not that accessible,” he said.

Gutierrez plays the violin six hours a day—three hours in the morning, and three in the afternoon. Nothing more, he said, unless he’s preparing for a concert. Practicing every day is not merely for his personal creative expression or for noting down technical weaknesses. Playing the violin, he said, is an athletic art.

A violinist has to sustain the energy required to play on and on. On stage, he said, some musicians drop three to four pounds doing one concert. “It saps you of energy if you give it your all,” he said.

Gutierrez will have one last encore before going back to Germany in October. “Passion” returns to Makati on Sept. 30 at 7:30 p.m., this time at the Ayala Museum in Greenbelt. Kabayao accompanies Gutierrez on the piano.

“I want to give the Philippines a stronger voice in classical music abroad so they would know we have classical violinists here. And then I want to bring back what I have learned abroad and share it here,” Gutierrez said.