A step up for Cosplay Mania | Lifestyle.INQ ❮ ❯ 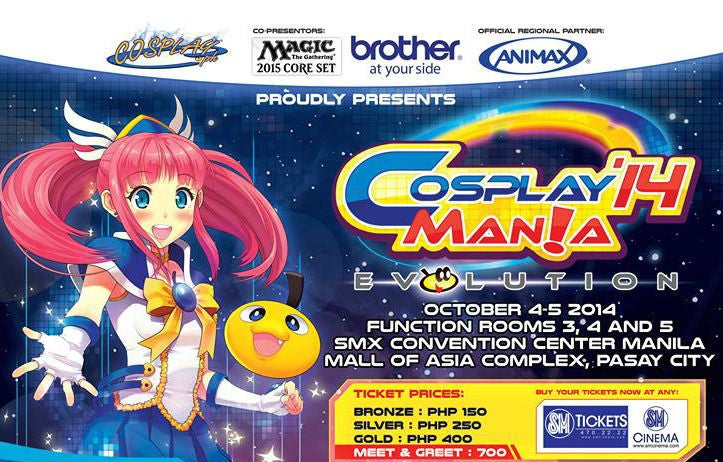 A step up for Cosplay Mania 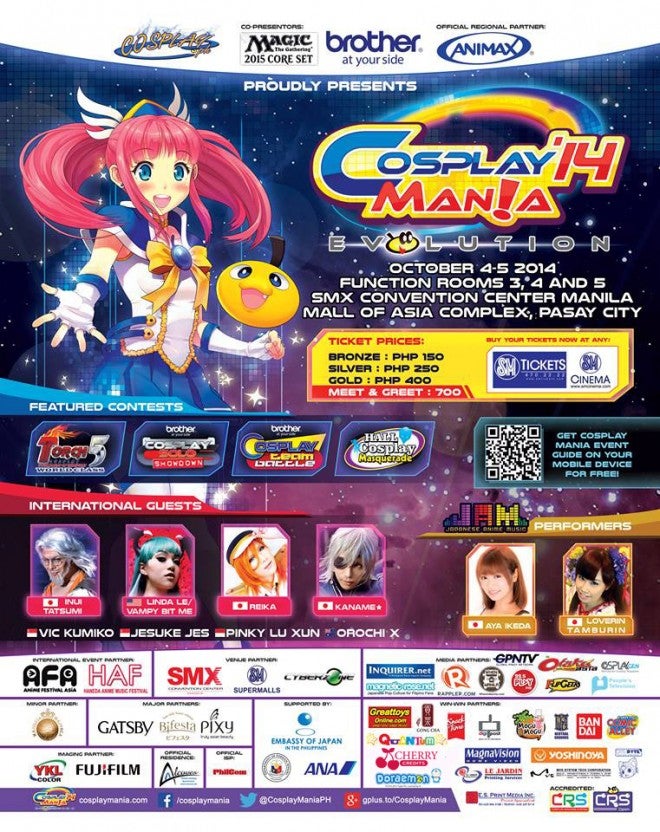 Slated for October 4 and 5 at the SMX Convention Center Manila, “Cosplay Mania Evolution” promises to deliver even more thrills for fans of cosplay, anisong, anime, manga, and gaming in the Philippines and the rest of South East Asia.

“Cosplay Mania Evolution” has revitalized the Cosplay Tournament of Champions (TorCh), mixing in a new flavor that will certainly bring more depth and life to the competition! The TorCh Mentor system has been implemented, where each team will be assigned mentors to help them win the honor of representing the country in the “Anime Festival Asia Regional Cosplay Championships”, to be held in Singapore in December 2014.

The event also features “meet-and-greets” with world-class cosplayers such as the all-time favorite KANAME☆ and Reika, along with international cosplayers Orochi X, Pinky, Vic and Jesuke. “Cosplay Mania Evolution” has even increased its stellar roster to include Japanese authority on cosplay Tatsumi Inui, and American cosplay superstar Vampy Bit Me.

The convention will once again feature its signature events the Cosplay Solo Showdown — where cosplayers get to strut their stuff on the catwalk; and the Cosplay Team Battle — where friends can band together and show the world that they are the team to beat.

To end the event with a bang, “Cosplay Mania Evolution” will feature the first ever JAM: “Japanese Anime Music” Concert in the Philippines, headlined by Aya Ikeda — the voice behind the theme songs of popular animes such as Heartcatch Precure!, Kindaichi Case Files and the online games “Finding Neverland Online” and “Harezora Monogatari”, and Loverin Tamburin — the band behind the opening theme for the anime Disgaea and the ending theme for Natsuhiro Drops.

Audiences, both old and new, will surely enjoy the activities, games, and giveaways, the awesome music, and the stellar cosplay performances — so join the Evolution! Tickets are still available at all SM Ticket outlets nationwide, or online via http://smtickets.com

“Cosplay Mania” is the Philippine’s premiere event for cosplay and cosplaying enthusiasts. As Cosplay continues to rise as a creative hobby for the young and old, the event continues to draw bigger crowds, with more than 25,000 attendees for last year’s two-day event. Now on its 7th year, “Cosplay Mania” celebrates the more than 10 years of Philippine cosplay history since the hobby’s humble local beginnings way back in the year 2000.

Established in 2006, Cosplay.Ph is the premiere website and online community for Cosplay afficionados in the Philippines. Based in Makati City, the company has spearheaded some of the biggest cosplay events in the country, such as competitions, conventions and workshops. Known among anime, gaming, toy, comic book and collectible groups, Cosplay.Ph has grown into an authority on Cosplay events and conventions, and has provided avenues for hobbyists to come together, interact and share their passion to the world.