I own a hedgehog, or is it the other way around? | Inquirer Lifestyle ❮ ❯ 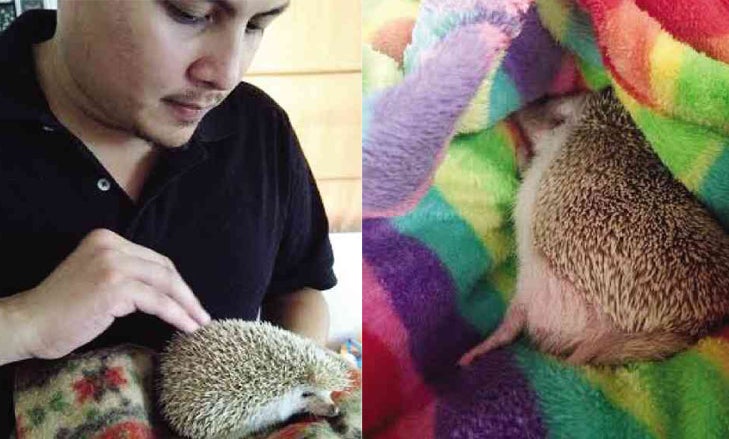 BRUNO is amaster napper and, left, meeting the author’s brother

I own a hedgehog, or is it the other way around?

The first thing you need to know about owning a hedgehog is that you don’t really own your hedgehog—in fact, on most days, it will feel like your hedgehog owns you.

That’s how it was with Bruno Pricklepants from the very beginning.

He wrote in his first Instagram post: “Notice the look of satisfaction on my adorable face? That is the look of someone who knows he is completely in command. I have hoomin slaves at my beck and call. They pick up my poop, worry if I’m eating enough, scramble to make sure I always have a fresh bowl of water, handle worms even if they’re squeamish…”

Just minutes after we met Bruno, he started licking my hand. “Aww, he likes me,” I squealed.

Then Bruno started frothing at the mouth and, in a move that reminded me of Linda Blair in “The Exorcist,” twisted his neck and started covering his quills with his foamy saliva.

Alarmed, we looked at the breeder. She laughed and said, “Did you put lotion on your hand? He could smell it and he was self-anointing.”

Which brings us to lesson No. 2: Don’t expect your hedgehog to act like a dog. Not even a cat. He will not come running when you arrive home, he will not play fetch and, when he licks you, chances are he’s not showering you with affection, he’s getting ready to self-anoint.

Self-anointing is both funny and disgusting and, as a hedgehog owner, you will get used to it.

Bruno has done it a few times—twice after chewing on my hair (he’s obsessed with my green hair).

There are different theories about why hedgehogs self-anoint—some say they’re trying to get used to a new smell, others believe the toxins offer them more protection, still others believe it’s a form of camouflage.

Hedgehogs are practically blind so they rely heavily on their sense of smell. And that is why, during the wooing process, we kept leaving our used shirts in his cage. It was a good way to let him get used to our scent.

Hedgehog care seemed daunting at first and I found myself googling every little thing but I soon realized that there’s a huge community of hedgehog owners online who are ready to offer support and advice (you will also find a lot of them on Instagram).

Hedgehogs are defensive creatures. They have quills for protection (yes, they’re hard, yes they can hurt when you touch them) and never expose their bellies which are the softest part of their bodies.

Unlike most pets, hedgies require a certain amount of “courtship.” And, like any good manliligaw, you have to be persistent. That means picking up your hedgehog even when he is a huffing, puffing ball of quills.

It is recommended that you spend at least 30 minutes a day cuddling with your hedgehog—yes, even on days when he doesn’t seem to like you. The effort pays off because even the crankiest of hedgehogs usually relax after a few minutes, then start exploring.

That’s how Bruno and I first bonded: I let him crawl all over me and turn me into his human jungle gym.

All the cuddle time paid off. The quills of a hedgehog lay flat when they are relaxed and soon, I realized that Bruno likes being petted.

And then eventually, we realized that our favorite thing to do together was nap. I have spent hours napping with a fat hedgehog also snoozing on my lap, on my stomach, on my neck, in the crook of my arm.

I wasn’t the only one charmed by Bruno. When I would go out, people stopped greeting me with “How are you?” Instead they started saying, “Hey, where’s Bruno?,” as if I walked around with a hedgehog in my bag.

Friends kept sending me hedgehog memes and videos (remember that hedgie birthday party?) and they started showering Bruno with gifts. He is now the proud owner of a Nanoblock panda, hedgehog erasers, a hedgehog sharpener, a hedgehog pinecone, hedgehog stickers and stationery. But what he really wants are worms.

Yes, that’s what pet hedgehogs eat: worms and dry cat food. Some hedgies like snacking on cooked but unseasoned chicken, hard-boiled eggs, vegetables and fruits. But not Bruno. We’ve served him all these things but he hates them.

Another thing that a lot of hedgehogs like but Bruno doesn’t is the wheel. Online we found a special wheel that was hedgehog-safe but Bruno never used it to exercise. Instead, he decided that the wheel would be another napping station.

He likes running around the bathtub instead.

He doesn’t bathe in the tub—he bathes in the sink. It’s a relatively quick process—I brush his quills with soapy water, rinse him off and then pour a capful of Vitamin E oil that’s been diluted in water (it helps his dry skin)—but he hates it. After the first bath, he was such an angry ball of spikes. He’s learned to relax a little more since then but he’s still not a fan of baths.

But my biggest challenge as a “hedgehog hoomin” is cutting Bruno’s nails. They’re so tiny that I’m always terrified of accidentally cutting his skin. I can only do a few nails at a time.

My second biggest challenge was accepting that, like any other boy, Bruno has urges that he needs to respond to.

Friends who have spent a fortune on toys for their dogs have asked, “What kind of toys does Bruno have?” He has a stuffed gorilla, a couple of balls and a toy car but he never plays with them.

Having a hedgehog in your life changes you. I used to be freaked out by worms but now I have no qualms about grabbing them (with tongs, not my hands—I still have limits) because I’ve seen how much Bruno loves them.

Hedgehogs have a lot to teach humans—about unconditional love (What is more unconditional than loving someone who keeps pooping and peeing on you?), about appreciating little things (toilet paper tubes meant nothing to me until he came along), about perseverance (it took weeks of work before Bruno finally became comfortable with us and it was totally worth the effort), about sacrifice (sometimes his quills make me break out in rashes but it’s a small price to pay for hedgie love).

I love him—even on days when he’s a spiky ball of rage.