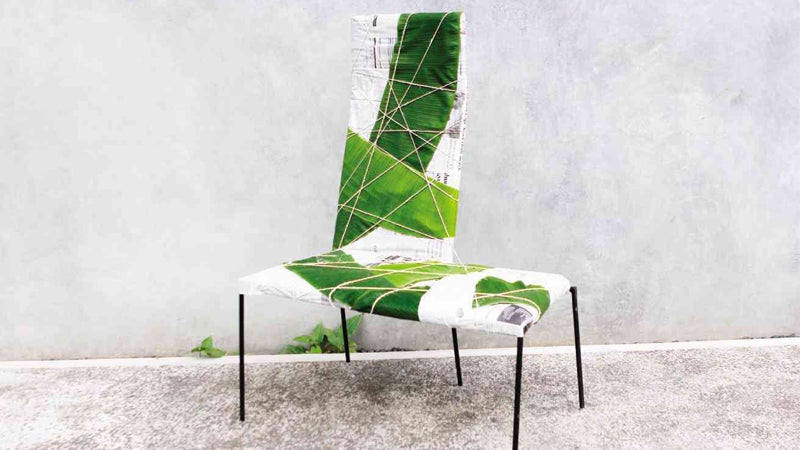 Furniture designer Milo Naval is in a phase in his career when design bears a social conscience—and wit.

The past five years, his pieces have shown concern for social and environment issues.

Naval’s recent collection, “Binalot Chair,” is a series of chairs in various proportions, which have been padded, wrapped in banana leaves and old newspapers and neatly tied with abaca rope.

“It’s a fun chair. To me, this is a suggestion for a party where you need a quick fix,” he says.

Instead of draping the chairs in fabric and consuming liters of water to wash them after use, the banana leaves and newspapers can be recycled when stripped from the chairs.

The original frames of these chairs are built of metal and covered with colorful PVC material for outdoor use. Naval plays with the proportions of the chair such as lengthening the backrest so one can sling a bag or extending the seat so it can replace the side table.

Naval introduced the idea of presenting solutions to a sustainable future in 2009 in an exhibit, “Survivalism.”

Scraps were transformed into accent furniture pieces such as chairs from tarpaulin, plastic bottle lamps, drawers from excess wood, a seater and coffee table from bottle caps, chairs from corrugated cardboard, sofas covered with leaves.

In the same year, Naval designed a Christmas tree made of pencils for Hyatt’s lobby. After the yuletide season, the hotel donated the pencils to a public school in Sorsogon, where the designer is now based.

“Instead of installing the usual décor and Christmas tree, Hyatt chose to be more eco-friendly,” he says.

Naval was also one of the designers who participated in Gawad Kalinga’s social enterprise, GKonomics Designer Series. “Silya” was a collection of chairs created by prominent designers.

The series set the guidelines of using sustainable materials, promoting the Filipino character and easily produced by the GK communities. Naval’s Swan Chair was upholstered with scrap fabrics from T-shirt manufacturers in a GK Village in Las Piñas. His company, likewise, taught workers in Las Piñas how to weave with natural materials such as abaca for future projects.

Naval still maintains his signature designs for his store OMO (as in One in a Million or On My Own) at the LRI Design Plaza for private clients, as well as his export company Evolve.

Still, his heart lies in redefining design that would benefit the community at large.

In Sorsogon, Naval has been working with manufacturers whose workers come from low-income households. Implementing low-cost technologies, they produce shell lamps in Prieto Diaz town and abaca cords in Pilar. It’s his way of addressing poverty by providing livelihood opportunities.

“I prefer to involve myself in projects with social relevance. I’m at a stage where I want to give back and not just work.”