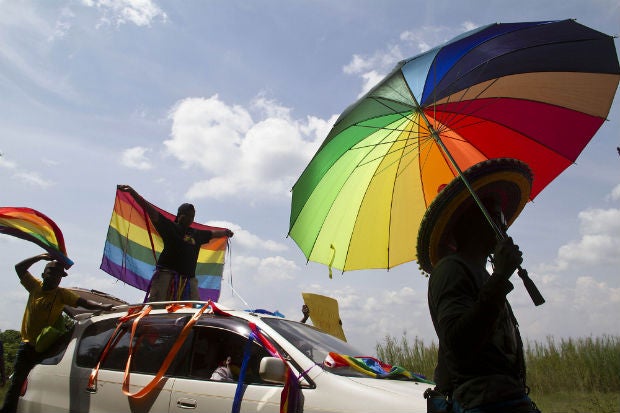 A file picture dated on August 9, 2014 shows a person holding an umbrella bearing the colors of the rainbow flag as others wave flags during the the first gay pride rally since the overturning of a tough anti-homosexuality law, which authorities have appealed, in Entebbe. Uganda is probably the last place a gay holidaymaker would want to visit, but tourism bosses in the east African nation are nevertheless trying to achieve the seemingly impossible. AFP

KAMPALA — Uganda is probably the last place a gay holidaymaker would want to visit, but tourism bosses in the east African nation are nevertheless trying to achieve the seemingly impossible.

Earlier this year the east African nation drew international condemnation after passing anti-homosexuality legislation — since struck down — that could have seen gays jailed for life.

The country’s tourism representatives and private sector businesses, however, have rallied to assure gay and lesbian travelers that they have nothing to fear.

“No one is actually being killed,” asserted Babra Adoso of the Association of Uganda Tour Operators.

“We are not aware of anybody who has been asked at the airport ‘what is your sexual inclination?’ or been turned away,” she told AFP.

In a move that raised eyebrows, members of the Uganda Tourism Board (UTB) and other industry representatives from Uganda met recently with the International Gay and Lesbian Travel Association (IGLTA), a gay-friendly global travel network.

The September 8 meeting, organized by the Africa Travel Association (ATA) and held at their New York headquarters, came a month after Uganda’s constitutional court struck down the anti-gay legislation on a technicality.

Still, under a standing colonial-era Penal Code, anyone in Uganda — including expatriates and visitors — can in theory still be jailed for “carnal knowledge against the order of nature.”

Ugandan MPs are also attempting to reintroduce the tougher bill in parliament.

Two Britons living in Uganda have been deported in the past 18 months for homosexuality-related crimes.

Adoso, however, is adamant that Uganda — known as the “Pearl of Africa” and before the outcry over the law designated by Lonely Planet as a top travel destination — is safe for gays and lesbians and that the country had been “misunderstood.”

The legislation, she said, was for the “protection of children” against pedophiles.

“Children have been recruited into acts,” Adoso said. “We’ve had stories of how children were forcefully taken to Kenya and recruited into the act and forced to actually, you know, pose nude and everything else.”

Gay rights groups, she said, were “possibly using exaggerated stories” about their own predicament in order to get funding from overseas.

The Ugandan Tourism Board admitted the country was now battling a serious image problem.

Sylvia Kalembe, the UTB’s officer in charge of product development, said she and others who attended the meeting in New York were “in shock at how people perceive us.”

“Someone has turned it around and used it against Uganda,” she said of the international condemnation — which included US Secretary of State John Kerry likening the law to anti-Semitic legislation in Nazi Germany.

John Tanzella, the head of the IGLTA, said the body appreciated being invited to meet with Ugandan authorities, but added that their 90-minute discussion was a “starting point only” — signaling the country still had a way to go if it wanted to attract gay and lesbian tourists.

“As with other destinations that have struggled with issues of homophobia, we advise LGBT travelers to exercise caution if they decide to visit,” he told AFP.

Ugandan gay rights activists are equally skeptical on the initiative, saying the country should first look at how it treats its own citizens who happen to be gay.

“It’s very difficult for us to even move from one town to another,” said activist Pepe Julian Onziema, adding that the pronouncements by Uganda tourism representatives gave the impression there was one law for locals and another for foreigners.

“The freedom has to begin with us,” he said.

Selling Uganda to gays is one of several curious initiatives the Ugandan Tourism Board has come up with this year as it tries to counter a drop in tourism — a key earner for impoverished Uganda that accounts for 8.4 percent of GDP.

In March, Stephen Asiimwe, chief executive of the UTB, announced a plan to create an “Idi Amin Tourism Trail” for those interested in Uganda’s murderous dictator who was ousted in 1979.

“Idi Amin is the most popular Ugandan ever but no one is making use of him. We have to develop this trail,” he was quoted as saying in the New Vision newspaper, saying this could rival other global tragedies-turned-tourist-spots like Holocaust sites in Germany and Poland or the genocide museum in neighboring Rwanda.

More recently, the UTB has been promoting a Ugandan coming-of-age festival involving the traditional ritual circumcision of boys aged between 13 and 18 years of age.