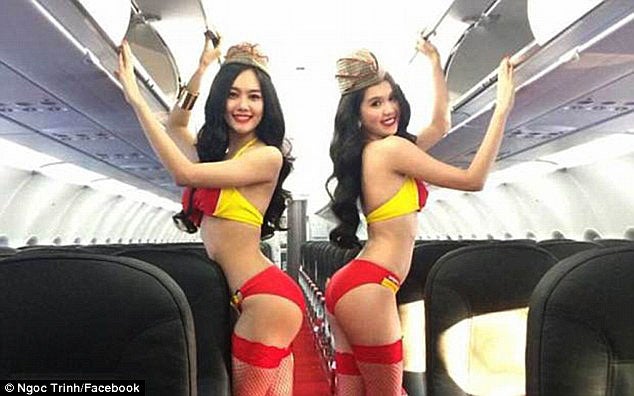 MANILA, Philippines—A Vietnamese airline that used bikini-clad endorsers for what appeared to be a promotional PR stunt earned the ire of netizens after it made rounds online.

“The models are seen inside the cabin opening the overhead lockers, walking down the aircraft steps and waving sparklers in the images which roused an angry reaction on social networking sites,” The Daily Mail reported last week.

It was Ngoc Trinh, a popular lingerie model in Vietnam, who posted the images on Facebook. Her photo album’s caption was: “Just finished shooting promo photos for VietJet Air for 12 hours nonstop from 9:00 am to 9:00 pm.” The album was later removed.

The Daily Mail said that the photos went viral and gained negative feedbacks, “with many criticizing the airline objectifying women in using them to promote their brand.”

An executive of the airlines said the photos were taken during a trial photo shoot for VietJetAir.

“We have yet to decide if we will use these photos or not,” he told Thanh Nien News, denying that the leakage of the photos was just a “PR ploy” employed by VietJet Air,” said Vu Pham Nguyen Tung, the carrier’s development director told Thanh Nien News.

VietJetAir was not the first airline to use females in skimpy outfits for brand endorsements. Irish airline RyanAir publishes a calendar featuring half-naked cabin crew annually.

In 2012, VietJetAir was fined was fined £611 by the Civil Aviation Authority of Vietnam for having its flight crew perform a Hawaii dance in bikinis on its inauguration flight between Ho Chi Minh City and the coastal resort town of Nha Trang, the Daily Mail said.